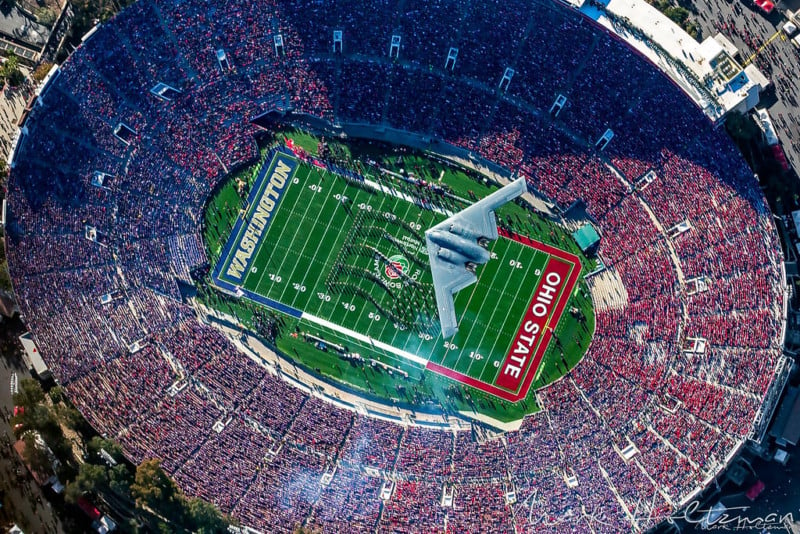 Ten years ago, in January 2009, was the first time I ever photographed a flyover and this year the same pilot was doing his last Rose Bowl flyover as he is retiring from the Air Force this year. The challenge this year was the strong winds and subsequent turbulence.

We were being tossed around a lot (and both of the B-2s mentioned the turbulence), but the timing still had to be exact for me to catch the B-2 over the stadium. Despite the heavy winds bouncing us all around, the B-2 pilots were perfectly over the stadium and I managed to be in a good position to snap some good photos.

Unfortunately, the wind blew my window closed just as the B-2 reached the stadium (in 20 years of doing aerial photography, this has never happened to me). A lot of my stadium pictures were not usable (apparently shooting through the window when the Sun is shining directly on it doesn’t yield very clear photos), but fortunately I managed to get this one photo.

I have been using Canon gear and shot this with the 5D Mark III with the 70-200mm f/2.8L lens. I took the picture from my Cessna 206 with a copilot and additional observer on board.

Just so everybody knows (there was some misinformation last year), I had another pilot in the right seat on the controls while I was photographing (for safety and because I get better photos when I have someone else take over the controls) and my adult son in the back seat as a spotter.

In order to capture this photo, there was a lot of planning involved and coordination between me, my copilot, air traffic control, the Pasadena Air Ops, and B-2 pilots. We had pre-coordinated our flight and were in constant communications with the controllers working that area and the local authorities who were coordinating the events.

It was a very difficult day for the shoot as we had 30-knot winds with moderate turbulence for both us and the B-2 pilots. Our first flight on the 1st was early in the morning to catch the B-2 flying over the Pasadena Parade, then we came back in the afternoon to catch a different B-2 over the parade route. 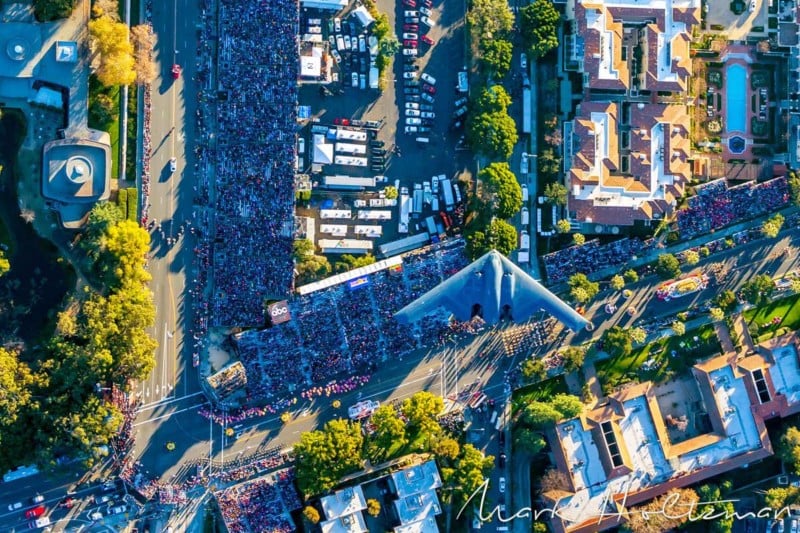 The Rose Parade flyover earlier in the day also had strong crosswinds and turbulence, making it much harder for the B-2 to stay on course. Even so, they were right on target.

About the author: Mark Holtzman is an aerial photographer based in Southern California. The opinions expressed in this article are solely those of the author. You can find more of Holtzman’s work on his website, Facebook, Twitter, and Instagram.

Portraits of Federal Workers Affected by the Longest Government Shutdown