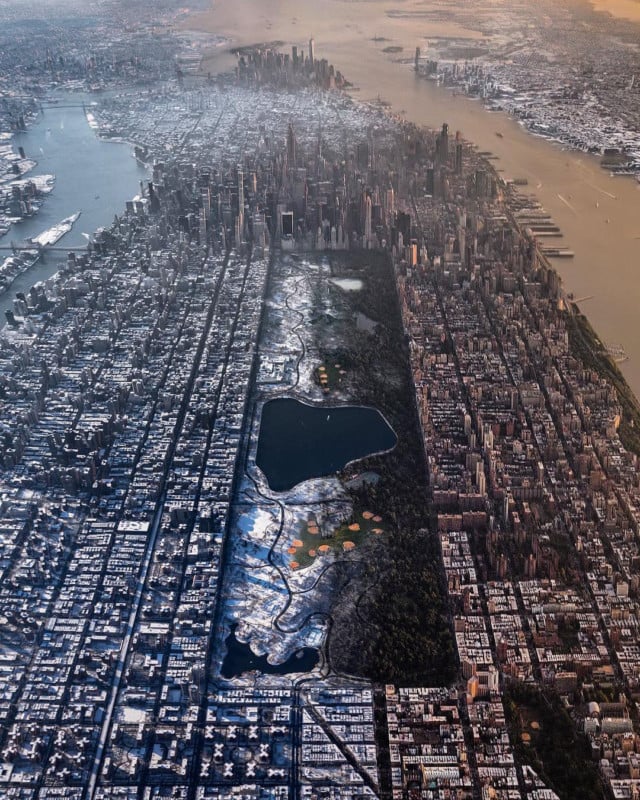 Photographer Paul Seibert created this beautiful aerial photo that shows how New York City changes between winter and summer. About half the frame shows a snowy winter view while the other portion shows the summer cityscape.

Seibert is the Director of Digital Content and a contributing photographer of/for FlyNYON, the New Jersey-based doors-off helicopter photo company, so he has taken a number of high-altitude flights in the company’s helicopters.

The first shot that went into the composite photo was shot the morning after a snowstorm swept through the city, while the other one was captured during the summer. Both were captured on a Canon 5D Mark IV DSLR and a Canon 16-35mm f/2.8L lens.

“The hard part was the alignment, as there was about 1,000 feet of elevation difference,” Seibert tells PetaPixel. “One was shot at 7500 feet and the other closer to 6500 feet.”

Thus, Seibert spent a considerable amount of time in post-production making sure all the “focal points” of Manhattan were lined up and that the grid was intact.

“I set out to try and just do a split frame, but I’d seen so many of those types of images, I wanted mine to be different,” Seibert says. “I started to blend the areas where I wanted to slowly transition, leaving some areas encased in winter, and others in summer’s warmth.

“My idea was to keep the lower lying areas in cold, and the taller buildings, where the sun was hitting, in warmth; with some exceptions. My only regret is not using the same river tones.”

What You Need to Know About Flickr Pro’s Adobe Discount

This is What a 14-Year-Old Nikon DSLR Can Do