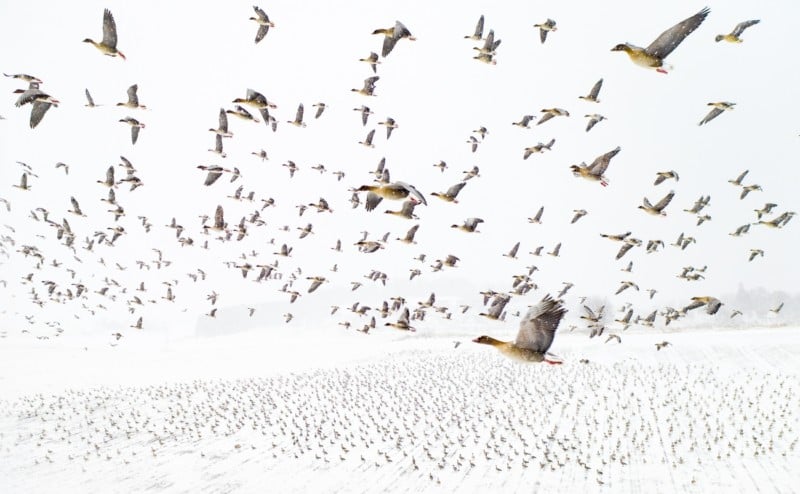 The Drone Photo Awards 2021 — part of the Siena Awards festival of visual arts — has announced its winners of the international contest of aerial photography and videography.

The Drone Photo Awards touts itself as the most important worldwide competition for aerial photography and video. The submissions are judged across nine categories — “Urban,” “Wildlife,” “Sport,” “People,” “Nature,” “Abstract,” “Wedding,” “Series,” and “Video: General” — and a single overall winner who receives “Photo of the Year” title.

All winning photographs for this award will also be showcased at the “Above Us Only Sky” exhibition in Siena, Italy this November. This event is organized alongside the Siena Awards Festival, with an opening reception held for artists and invited media, photo editors, and other industry insiders. In addition to work being exhibited in print and online, each individual drone category winner will receive a “Pangea Prize” crystal statuette, while the overall Drone Photographer of the Year will also be awarded photography equipment worth €500 (about $590).

Drone Photographer of the Year

The overall winner of the competition this year was awarded to Terje Kolaas, a Norwegian photographer. His photograph shown above, titled “Pink-footed Geese Meeting the Winter,” took top honors and was selected from tens of thousands of images submitted by photographers from 102 countries. The winning photograph depicts a flock of thousands of Pink-footed geese — a migratory breed of geese with breeding grounds in Spitsbergen, Iceland, and Greenland — flying over snow-covered ground. 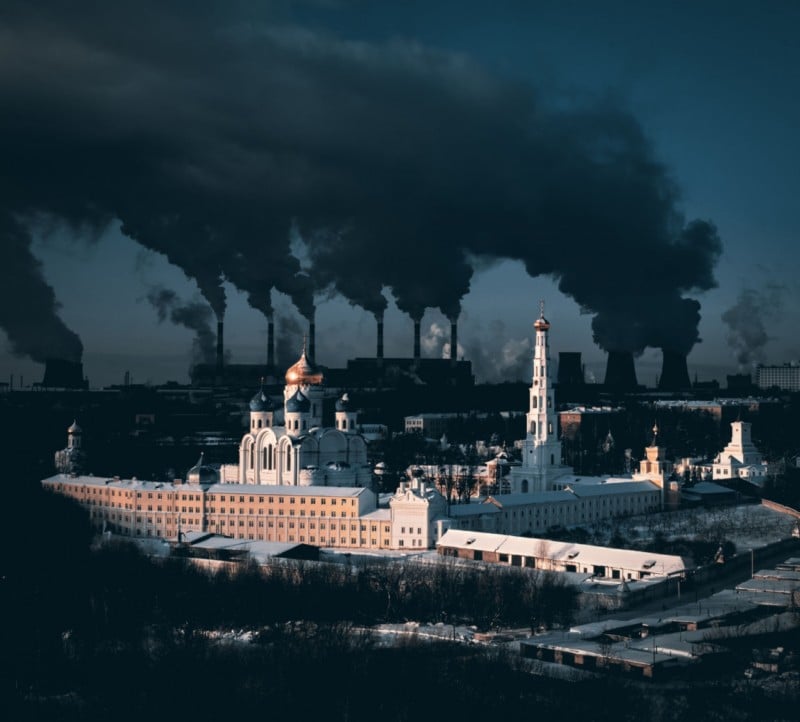 The first place in the “Urban” category was won by Russian aerial and architecture photographer Sergei Poletaev for his photo, titled “Metaphorical Statement About City and Winter,” which portrays an old monastery near Moscow with a large power plant in the background. 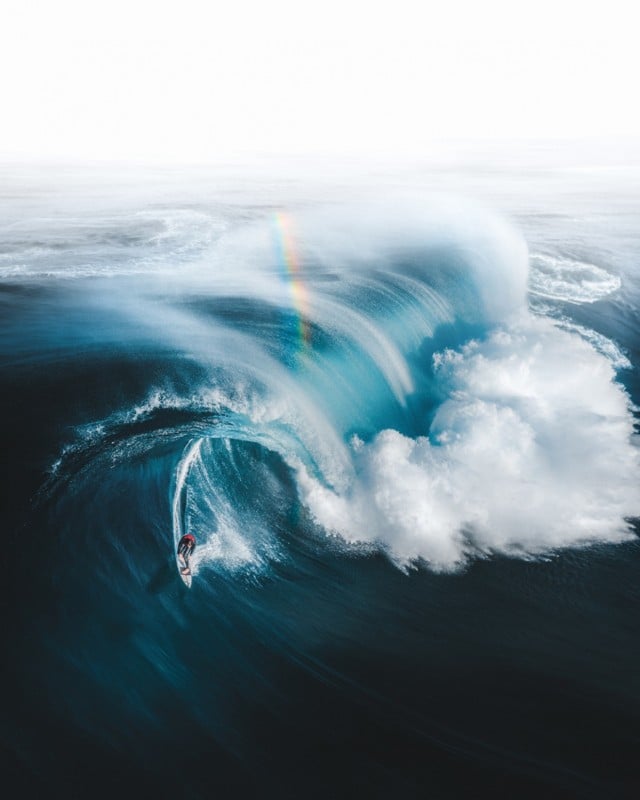 The “Sport” category was won by Australian photographer Phil De Glanville, who captured a striking rainbow above surfer Ollie Henry who was struggling with a frightening wave. The image, titled “Gold at the End of the Rainbow,” was shot off the coast of South West region in Australia. 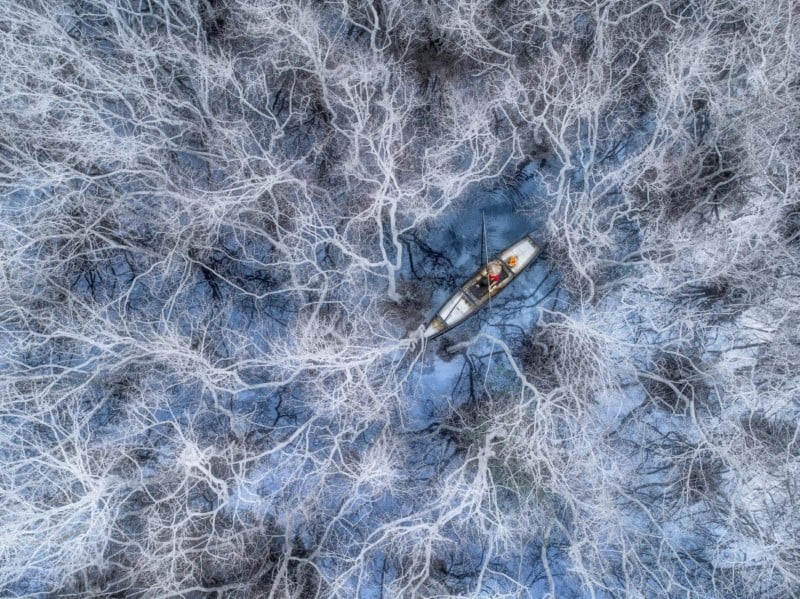 “Fishing in Mangrove Forest,” taken by Vietnamese photographer Trung Pham Huy, won in the “People” category. The winter image portrays a fisherman who begins his working day in the mangrove forest of the Tam Giang lagoon, Vietnam. 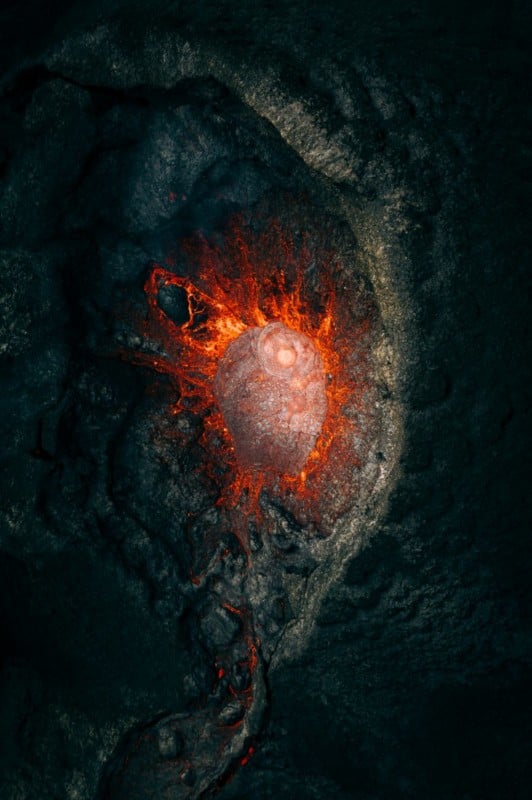 American photographer Martin Sanchez’s inmate “Extragalactic” won in the “Nature” category. The photograph was taken in Iceland and captures the extraordinary moments of a volcanic eruption from above, giving viewers a glimpse into the heart of the crater. 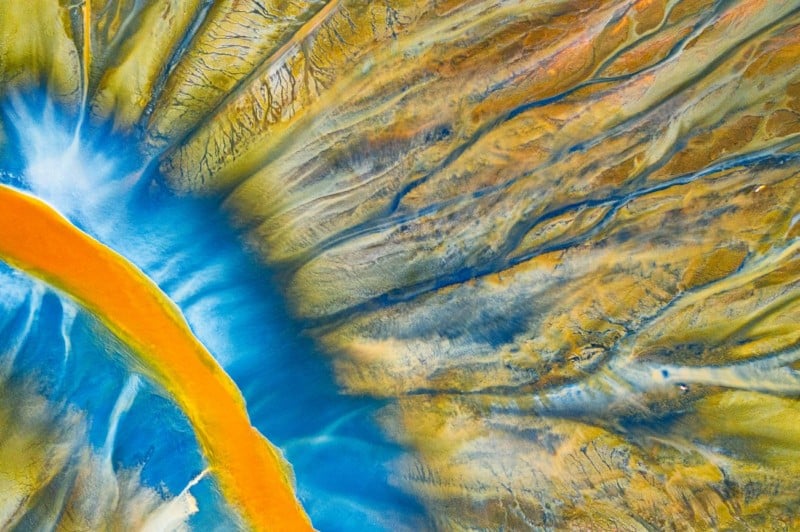 The colorful image “Poisoned River,” taken by Romanian photographer Gheorghe Popa, won first place in the “Abstract” category. This photograph is a creative and personal way in which the photographer depicts the natural disaster produced by chemical waste generated by the mining of copper and gold in the Apuseni mountains in Transylvania, a region in central Romania. 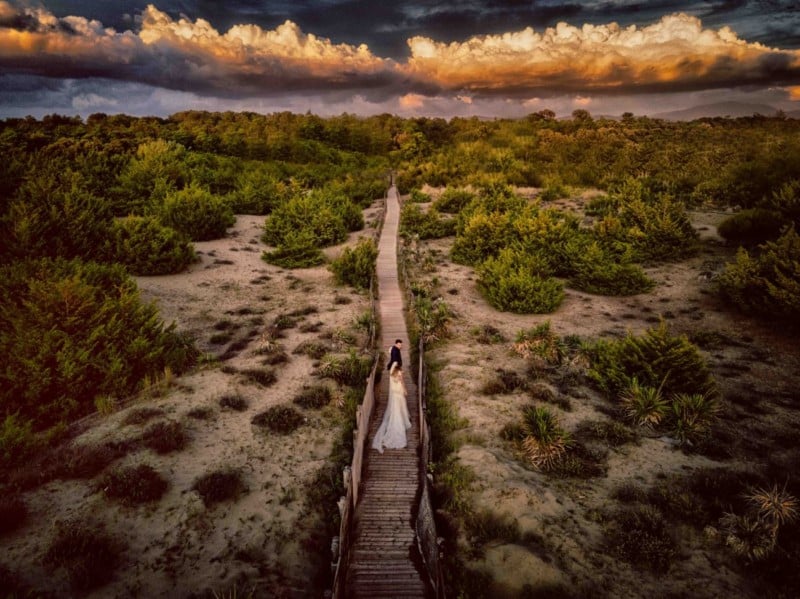 Italian photographer Matteo Original won in the “Wedding” category with his photograph “Towards the Infinite Together with You.” It shows a married couple hand-in-hand during a late summer evening at sunset in Marina di Pisa, a seaside resort of Tuscany. 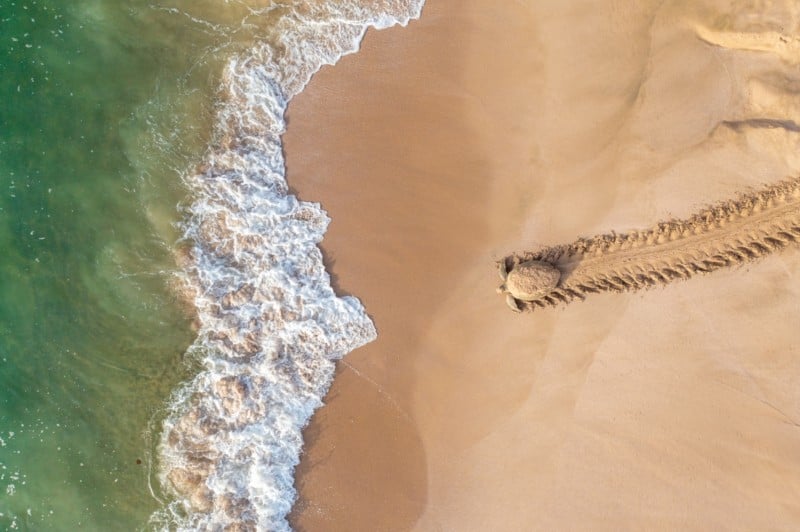 Photographer Qasim Al Farsi from Oman won the “Wildlife” category for his aerial photo “Back to Adventure,” which depicts a green turtle ready to return to the water after laying its eggs on the coast of Oman. The photo was taken between Ras Al Jinz, the easternmost point of the Arabian Peninsula, and the Rashad turtle reserve.

The final photographic category — “Series” — was won by Pakistani-American photographer Adrees Latif with a sequence of images, titled “Blanketed in Fire Retardant.” That series can be viewed here.

His collection of images documents the city of Talent, Oregon, covered in red flame retardant which was dropped by aerial firefighting efforts in hopes of saving the town from the fire. This disaster resulted in three fatalities, caused 3,000 residents to be displaced, and destroyed nearly 3,000 structures over a 9-mile area.

The full list of winning entries, including runners-up and highly commended submissions, can be viewed on the Drone Awards website.