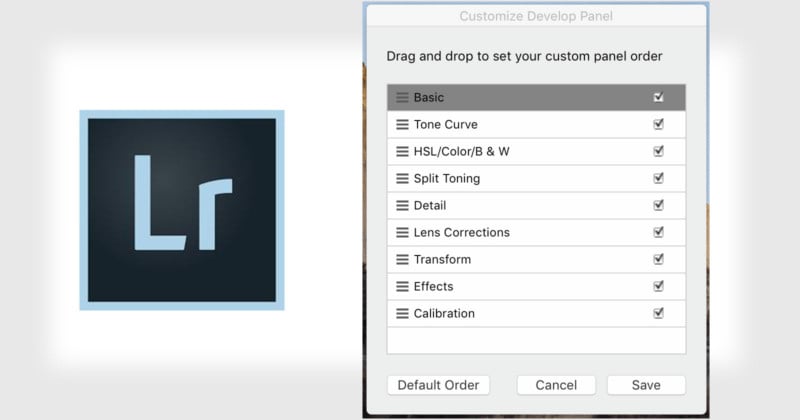 Here’s a rundown of the notable changes across the different apps (a full list of changes can be found here):

You can now customize the order of (or hide) tools found in the Develop module for your own personal flow. Right click (or Ctrl+click on Mac) on any panel header and select “Customize Develop Panel” to bring up the box for reordering and hiding tools.

You can now auto-import photos directly into a collection. By setting up a watched folder, you can have new images in that folder automatically imported and added into a collection. Visit File menu->Auto Import Settings and select “Add to Collection”.

“In the Book Module, photos now snap to align with other photos by default, and a new option was added to allow photos to be aligned to grid lines, making precise layouts super simple.”

“[Y]ou’ll notice faster grid scrolling as well as up to 5x faster switching between the Library and Develop modules on 4K and 5K monitors.”

Lightroom CC for Mac and Windows

“With the new Target Album feature, you can quickly add photos to a target album from anywhere in your library with a single shortcut.” Right click (or Ctrl+click on Mac) an album or click the three-dot menu and hit the “Set as the Target Album” option. Once this is selected, anytime you hit the ‘T‘ key the select photo will be added to the target album.

“When sharing your Lightroom albums with friends and family, you can filter which images are shared based on picks and star ratings, enabling you to share an entire album but ensuring that only the best photos are accessible by anyone else.” “We improved import speed, making it faster for you to import images into Lightroom CC from an SD memory card or camera connected over USB. We also improved how quickly faces load in People view.”

Lightroom CC for Android and ChromeOS

“In addition to the Library Tab, there’s a new tab that provides you with access to all of the photos and albums that you’ve shared to online to lightroom.adobe.com.” “You can now create an online share of photos with a arbitrary assortment of photos. Instead of creating an album and sharing that album, you can now select any number of photos that you want to share, tap the 3-dot menu at the top-right of the screen, and then select Share to Web.”

“You can now access the internet via wired ethernet, a feature often requested for running Lightroom Android on ChromeOS.”

“This release has a number of small tweaks and performance improvements as we prepare for some exciting features that will be coming next year.”

You can start using these new features and improvements now by updating your Adobe app to the latest version through the Creative Cloud or through the app store you use.

A Simple Hack for Easier Focusing with TLR Cameras

That ‘Debunking’ of a Paris Protest Fire Photo is Fake