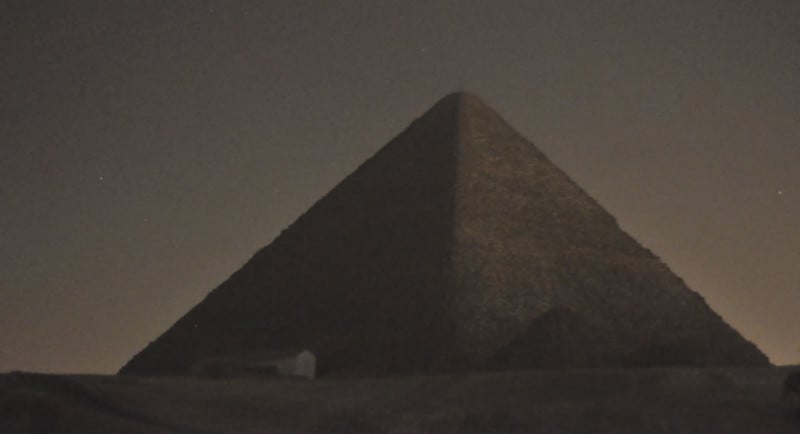 Egypt has launched an investigation after a Danish photographer released photos and a video showing himself and a woman climbing the Great Pyramid of Giza and doing a nude photo shoot at the top.

Photographer Andreas Hvid released the images December 7th, stating that he and “a friend” climbed the pyramid in November.

“Fearing to be spotted by the many guards, I did not film the several hours of sneaking around at the Giza Plateau, which lead up to the climb,” Hvid says.

The three-minute video Hvid posted shows the duo climbing the pyramid, reaching the very top, and then beginning to undress for the shoot.

The resulting photos appear to show Hvid and the woman nude and in sexual poses. After publishing the images, Hvid has removed all but one of them.

Egyptian authorities and citizens are furious over the viral images. The country’s Ministry of Antiquities issued a statement on Saturday saying that Hvid’s shoot “violates public morality” and requesting that the Attorney General launch an investigation. Social media has also been bubbling with anger and condemnation over Hvid’s actions.

“For many years I had dreamed of climbing the great pyramid,” Hvid tells Danish tabloid Ekstra Bladet. “The idea of making a ‘nude shoot’ up there had also existed for some time. […] I’m sad that so many people have become so angry. But I have also received a positive response from a lot of Egyptians — something I think is worth remembering.”

Not everyone is convinced that Hvid actually scaled the Great Pyramid.

“One hundred percent it is photoshopped,” former Egyptian Minister of Antiquities and archaeologist Zahi Hawass tells NBC News. “There is no way any one can enter the Pyramids area at night. […] Those are not the stones of the big Pyramid. They’re too small.”

But this isn’t the first time photographers have apparently climbed the pyramid. In 2013, Russian photographer Vitaliy Raskalov purportedly hid from armed guards for 5 hours before climbing to the top for nighttime photos of the area. And the stones in Raskalov’s photos appear to be about the same size.

And in 2016, an 18-year-old German tourist named Andrej Ciesielski scaled the pyramid in 8 minutes during the day and posted a video of his stunt.

Authorities say they’re working to determine whether Hvid’s images are real, and any penalties imposed on Hvid will also depend on whether damage was done to the site.

If convicted of performing indecent acts in public, Hvid could face up to a year in prison and fines, NBC News reports.

Image credits: Header photo of pyramid by Divya Thakur and licensed under

Band of Brothers: The Lives and Deaths of War Photographers

Human vs Machine: Can This AI Retouch Photos Better Than You?