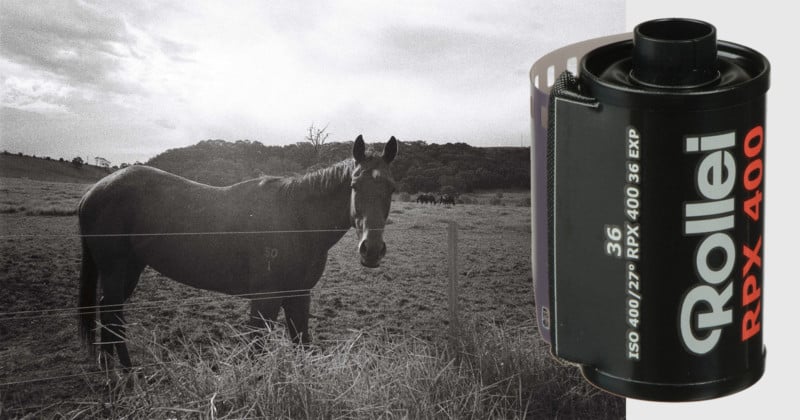 While scanning through my Facebook feed, I saw that my friend Ruby had shared some pictures of a party, all taken on Kodak Ultramax. One of her friends, however, pointed out something that I had never thought of…

Ruby is a vegan, and film is not a vegan product. Film is made of gelatin, which, as you may know, is a product of animal bones.

Ruby admitted being ignorant of this sin and confessed on the spot. But she replied that while there was no vegan alternative in film at the moment, there was research into finding a vegan replacement. This triggered my cynicism alarm — film had been manufactured the same way for almost a century and with film sales at one of the lowest points in history, I didn’t see Kodak or Fuji pouring money into expensive R&D to make a few vegans happy.

I Googled “film with no gelatin”.

The first result was a PETA article (which I’m assuming is the post that she found) that states:

Unfortunately, we do not know of any film that is made without gelatin. Over the years, PETA has pressured film manufacturers to find a gelatin substitute, and while Kodak and Fuji have researched non-animal alternatives, they still claim that they cannot replace animal gelatin in film…

With a bit more Internet sleuthing, I came across an article by Mirko Böddecker of the German film company ADOX that seems to have been written in response to the PETA one. It’s difficult for me to take just one quote from the piece because it’s so succinct and directly answers every question I had to ask. To paraphrase:

Film is not vegan, it never will be, and alternatives to gelatin have already been investigated in the 50s and 60s and did not work. However, gelatin is probably also the best option in terms of sustainability, as it bio-degrades and its production is essentially the recycling of dead animals.

Gelatin is manufactured from skeletons of dead animals, yes, but after all animals will die at a certain point and for sure no animals are killed especially for making gelatin. Rather they are killed for their meat and byproducts arise in large amounts. Not eating meat really helps you in achieving your goals of reducing human cattle raising, but not using film will have no impact at all.

The photographic industry today is so unimportant that we are using less than 1/1,000,000,000 of the animal byproducts which arise from the meat industry.

The amount of gelatin used to make film is tiny:

W”e are coating with about 3-9 grams per square meter, which equals 16 films,” Böddecker writes. “So the bones of one dead horse can deliver enough gelatin for tens of thousands of films.”

I worked at probably one of the busiest, if not the busiest, labs in Australia. On a good month, we would scan maybe 1,500 rolls of film, and that is including re-scans of old rolls. Conservatively estimating (let’s just assume “tens of thousands” is 20,000 thousand), one horse would give us all gelatin for all the film we processed with plenty left over for our end of year Aspic cookoff:

So to think ecologically, though (as in the entire film development process), let’s start with the principal developing chemical in the C-41 process, which is p-phenylenediamine. Phenylenediamine, in addition to being hard to pronounce (glad this is an article and not a video), is considered an allergen by the EPA. The profile of the chemical, states that in a study on rats, it caused a suppression of appetite and decreased body weights but no other clinical signs of toxicity where recorded.

I wouldn’t want to take a bath in C-41 developer, for sure, but as long as I’m careful not to get it on my skin or eyes, I’m not too concerned about my long-term exposure to it. As far as long-term ecological impact goes, I would assume they are relatively minor. There are plenty of worse chemicals that are used in photographics. Phenylenediamine developer seems to be one of the least harmful in comparisons with bromine-based ones, which are highly toxic and hard to dispose of.

The fixing/bleaching chemicals, on the other hand, are a bit of a different story. Ammonium thiosulfate is more toxic — it can cause serious skin irritation (it’s bleach) and its exposure to the ammonia gas that evaporates off it can cause problems to liver function. The biggest problem with blix (bleach and fixer) is that it also strips the silver nitrate off the film, and silver can be very toxic. On the other hand, every photographic lab that I know of uses a silver recovery machine, so the silver is recycled and sold back to chemical processors.

Film production and development is not an environmentally pure process by any length of the imagination; it’s hard to think of any industrial process that is. But it shouldn’t keep you awake at night thinking of all the animals that are murdered for the sake of printing your holiday snaps or that portrait for Grandma’s coffin.

If anything, you should feel sanctimonious about it (provided you’re not shooting film with a disposable camera) because film cameras are old, recycled, and generally have a much greater life expectancy than any digital camera.

CCD and CMOS sensors are made out of rare earth materials, that are generally mined in Sub-Saharan Africa under oppressive regimes. The manufacture of these components is also largely done by China, which has very little environmental regulation or waste management schemes in place, and shipped across the seas in large tanker ships and then expected to be replaced by a new model in as a little as a year.

I would argue that there are pretty strong reasons to shoot film if you have any concern about the environment or animal welfare if you have to shoot anything at all. Not that I’m giving up my digital camera any time soon. You’d have to take that from my cold, dead, horses hooves.