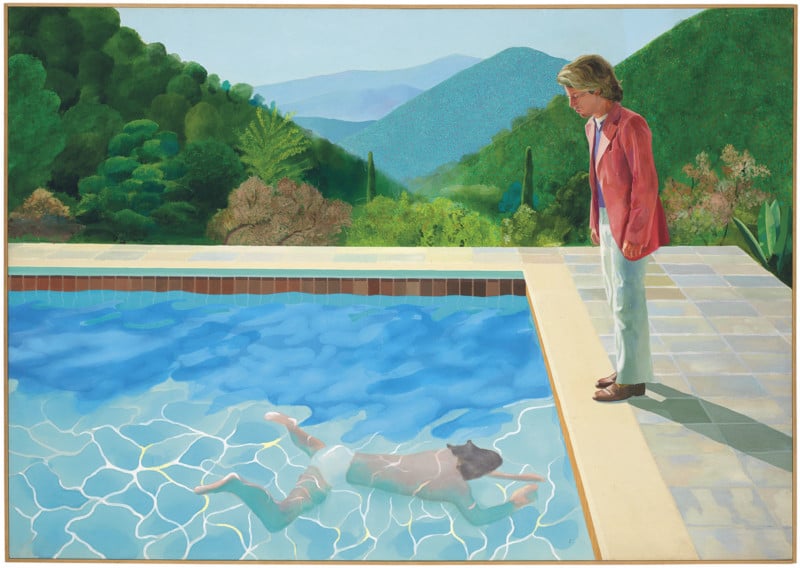 Last month, legendary British painter David Hockney‘s 1972 painting titled “Portrait of an Artist (Pool with Two Figures)” (shown above) sold for a jaw-dropping $90.3 million, the highest auction price ever for a living artist!

The painting depicts a male figure, the pink-jacketed painter, standing at the edge of a pool while carefully observing a man in trunks swimming underwater.

What on Earth made this piece of art so invaluable? There could be an entire book or thesis written on interpreting its elements. I see this painting more like a photograph and so found it interesting to dissect this masterful piece of art with a photographer’s eye.

Ironically, this painting (or should we call it “photograph” from now on) breaks “the” most important rule of photography. Note the shadow behind the man in the pink jacket. It is sharp with distinct borders. That means this photograph was NOT shot during the golden hour, but well after sunrise. 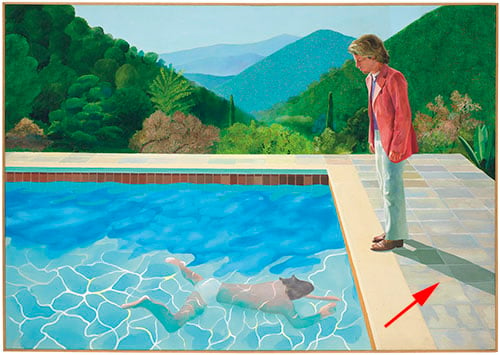 This was quite bewildering for me at first. After a while, I realized, that one of the hardest tasks for artists is to depict water. How can you draw or paint water? Will you just paint a monochromatic blue region and show it as water? This is what separates Hockney from others. He is well known for discovering the art of how to paint water in its most natural form.

Here, he depicts the intricate details of the ripples against a relatively serene water surface. These beautiful features can be shown only when sunlight hits water and then reflects back. This is most probably why the shot was not taken at Golden Hour!

If this were a photograph, what could have been the settings used? The field of view is neither wide nor too narrow. I would guess it to be a 50mm lens. As you can see, the image seems to have a good amount of depth of field. The hills in the background are kind of sharp. So, probably the f-stop was around f/16. 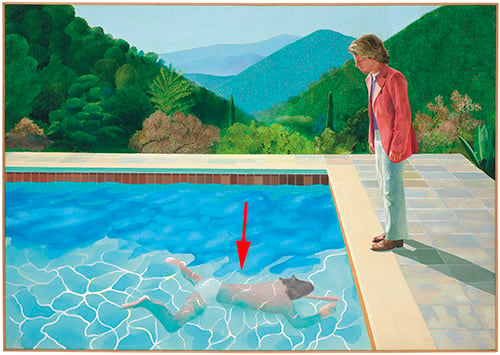 Now imagine trying to take this photograph at say 10 am to 11 am in the morning on a clear sunny day. You have your DSLR with manual mode on. You dialed in 1/400 and f/16. What do you think will be the ISO (assumed to be on AUTO) for the light meter indicator to be in the center? Wouldn’t it be probably around ISO 400?

Have you heard of the Sunny 16 rule? It is a method of guessing the correct daylight exposure without using a light meter. The basic rule states that, “On a sunny day, set aperture to f/16 and shutter speed to the reciprocal of the ISO setting for a subject in direct sunlight. That means if you dialed in f/16 and Auto ISO goes to 400; set your shutter speed to the reciprocal of ISO, i.e. 400 in this example. That gives 1/400! Woah! It’s spooky how right we were about the settings, weren’t we?

The man in the pink coat is placed at the rightmost third of the image. By placing him in this third, we know that he is the primary subject in this photograph. Indeed, the title Portrait of an “Artist” reinforces the same.

It is often helpful to have as many triangles in your photograph as possible. This piece of art, in particular, is just heavily dominated by triangles. I can count at least twenty-five triangles here.

The swimmer’s hands and legs are also inclined in the shape of a triangle! Most of these triangles also form leading lines that draw our attention back to the two subjects.

The most striking of the triangles is that which is completely unseen: this is known as an implied triangle. Can you guess this implied triangle here? This one is formed by:

1. the line of sight of the standing man as he observes the swimmer,

2. the swimmer’s body itself, from his feet to his head as he reaches the edge of the pool towards the man’s feet,

3. the man’s stature itself from his feet towards his head and ultimately his eyes. 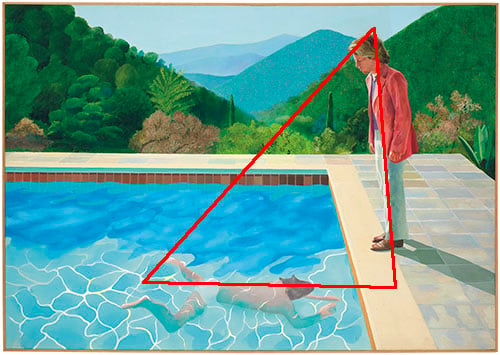 This invisible triangle just plays on and on in our subconscious mind as we view the image, and this is one of the things that keeps us engrossed. So, despite the large depth of field, our eyes are mostly focused and repeatedly drawn on the two subjects. This coupled with the calmness, tranquility, and peace implied by the blue and green in the rest of the image adds to the visual tension and thus generates profound interest.

Even though the swimmer seems the secondary subject here given his subtle coloring, the edges of the pool form a frame around him that prevents his importance being undermined from the image.

I’m no expert in color schemes, but a basic guideline to follow when deciding complementary colors is to choose opposite colors in the color wheel (just Google Color wheel and you’ll find one). For example, the color opposite to Red in the color wheel is Green, hence the artist has contrasted the red (pink) jacket with lots of green in the hills and the trees.

Also, there seemed to be too much blue of the water in the pool. Hence there was a cleverly placed orange strip along one of the pool’s edges that the swimmer is facing. After all, blue and orange are opposites in the color wheel! 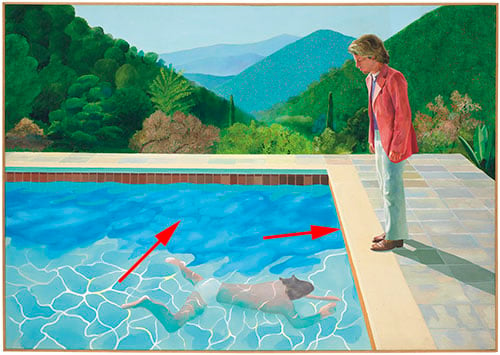 When I researched some more about this painting online, I was awe-struck on finding exactly how Hockney devised the painting. Turns out, he is a famous photographer as well!

Before starting the painting, he took hundreds of photographs of the man in the jacket by the side of a pool with a swimmer! Then he combined his ingenious painting skills (especially showing the splendid effects on the water) with the previously taken photographs and completed the painting in two weeks, working almost 18 hours a day!

The result: a well-balanced image with the perfect composition! A photograph of the same scene will look ordinary. Turning it into a painting made it not only extraordinary but also one of the most revered ones of the 20th century!

So try to get these rules in your composition exactly right. Who knows… perhaps even your photograph could fetch millions one day!

About the author: Dr. Siddharth Shirsat (MDS Endodontics) is a practicing dentist (Endodontist) at Thane, MH, India. The opinions expressed in this article are solely those of the author. When not treating patients, Dr. Shirsat is an avid photographer as well. He can be reached by email on [email protected].

Image credits: “Portrait of an Artist (Pool with Two Figures)” by David Hockney