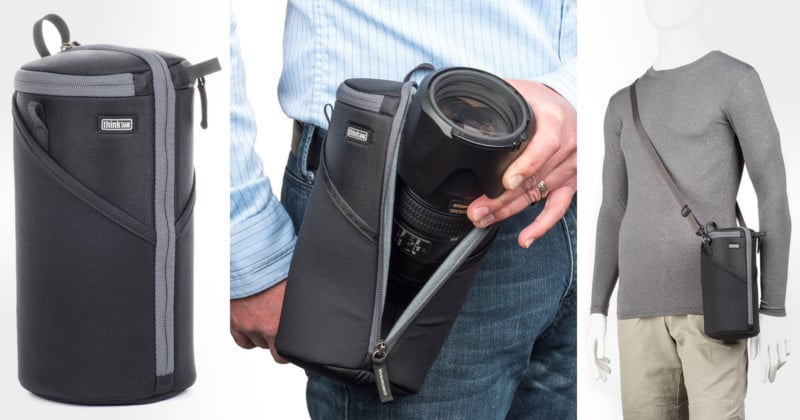 I’ll be honest, I’ve never been one to use a lens case. Even when lens manufacturers have included them with their lenses, they usually find their way back into the box or into one of my many “drawers of no return,” never to be seen again. So when I saw the Think Tank Photo Lens Case Duo, my initial instinct was to yawn and move on, but something grabbed my attention. That something was the “duo” aspect of the case.

I’ve never seen a lens case that could open up two ways, and I was intrigued by the design. I also wanted to see if this lens case might be something I could integrate into my workflow. So I asked to use one of the lens cases to try for a bit to get a sense of how it could work for me. For this review I used the Lens Case Duo 40, the largest one in the series. 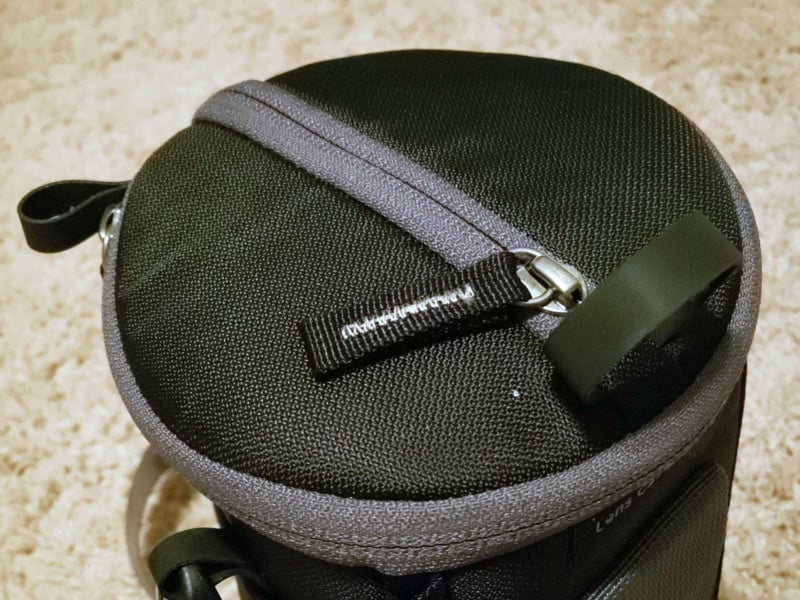 The lens case, much like almost everything I’ve ever used from Think Tank Photo, is well designed and thoughtfully crafted. There is a level of attention to detail in both the design and material used that signals to the user that this is quality. There isn’t a single thing about the case that is cheaply made or poorly constructed. From the zipper tabs, to the exterior pockets, to the case material itself, everything feels great in the hand and built to last.

The dual zipper design is thoughtfully implemented and smartly executed. The top zipper opens the top flap to allow quick and easy access to the lens vertically, while the middle zipper gives the case versatility. I opened and closed the case many times and had no issues with the zippers getting caught or stuck. 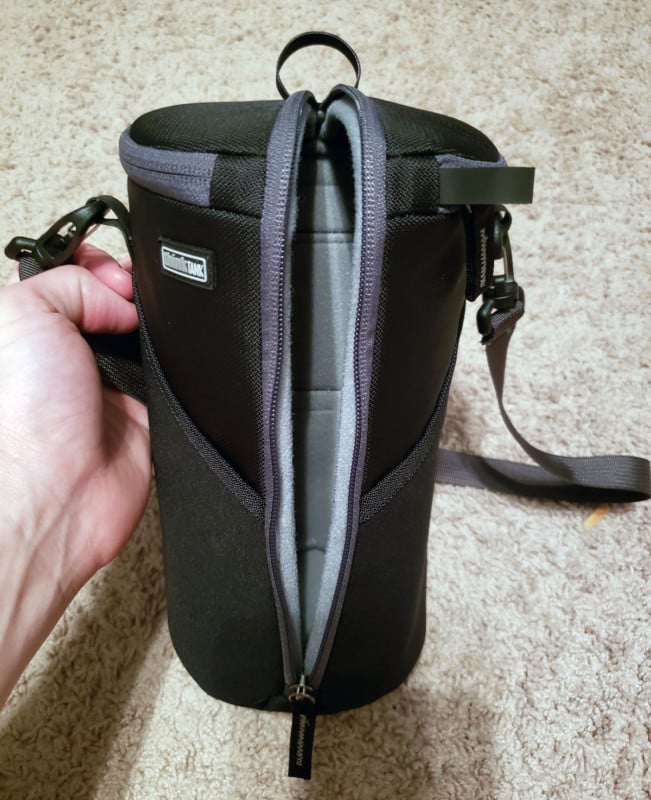 On the sides of the case are two loops used for the shoulder strap. The shoulder strap was of fine construction, but nothing special. It’s a thin adjustable strap that allows the user to easily carry their lens case over one shoulder or cross body. I would have liked for a bit more padding to make the strap a little more comfortable, but it never wore on me or got on my nerves. The lenses I was carrying around were never heavy enough to make me want for anything denser, but it still would have been nice to have the extra padding. 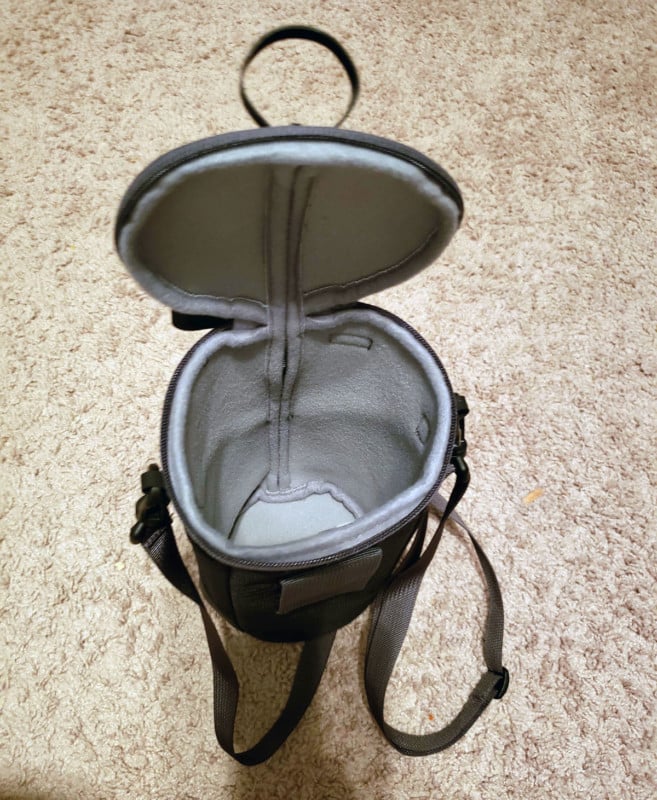 The case also contains two side pockets which can be used to store lens wipes, lens caps, batteries, or even a flash if you’re feeling bold. The final aspect of the lens case is the belt loop. The loop is great for putting on your belt if you’re not keen on using the shoulder strap, or just want something more secure. I placed the lens case on my Think Tank Photo Pro Speed Belt, and while it fit and was functional, it was definitely not designed for the system.

If you’re thinking about getting a series of these and attaching them via a belt system, make sure the system is right for it and keep in mind the limitations inherent with a system like this. I highly recommend going with the Pro Speed Belt and it’s specific lens pouches before cobbling a system together with the Lens Case Duo.

I used the lens case in every configuration I could think of, starting with the shoulder strap, then the belt loop and event attaching it to a camera bag. I felt in each scenario the case was good for holding my lenses. I never felt like the lenses were going to fall out of the case, or that the case would open unexpectedly. While wearing the case via the shoulder strap I found it easier to open the middle zipper instead of the top zipper. The zippers feature pull straps which help give you leverage when opening the case while it’s on your body. This same ease of use came in closing the case as well, with the middle zipper being much easier to close while it was on my body.

I also wore the case on my pants belt. I found the experience to be perfectly comfortable and functional. If I had more cases I could definitely see myself putting at least one lens on each side. 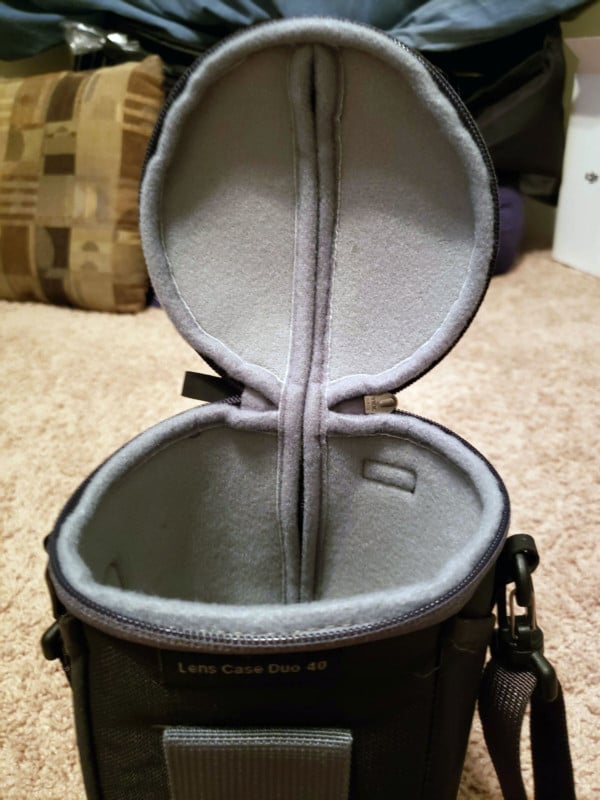 I’d say the only issue with working with this system is that when you are trying to swap lenses on the go while standing, no matter the configuration, it takes a little getting while to get used to swapping the lenses. I’d have to take one lens off, but before that, I had to open the lens pouch and pre-remove the lens back, then hold the lens I just removed in one hand while grabbing for the other lens to place on the exposed camera. I’m a little more comfortable with this process with a normal camera bag thanks to the fact that provide a more easy to manage platform, but I think if you can get used to this process then the system works fine.

At its core, the Lens Case Duo is designed to provide protection to your lenses, and this case does that. With my lens in the case, I felt confident that it wasn’t going to break if I brushed up against a wall or knelt down. Furthermore, I felt I could confidently store this lens in the case in any of my other cases, or even a suitcase, surrounded by clothes, and the lens would be fine. Great if you’re trying to travel with limited luggage.

Keep in mind, though, that this case won’t protect your lens from everything. First and foremost, the padding used in the case isn’t very thick. Again, I think it’s fine to protect against bumps and bruises, but extreme impacts could still cause your lens to be damaged.

Second, the lens is a soft case, there is no hard structure or casing built into the lens case that will protect your lens from crushing. Keep this in mind if you plan to travel with the lens in the case and want to store it in your luggage.

Finally, keep in mind that the case isn’t 100% weather sealed. Sure, the case will be fine it rain, and heck, it could even survive in a downpour, but if you submerge the case water it will get in and could damage your lens. Keep this in mind if you plan on taking the case on any kind of aquatic adventures. 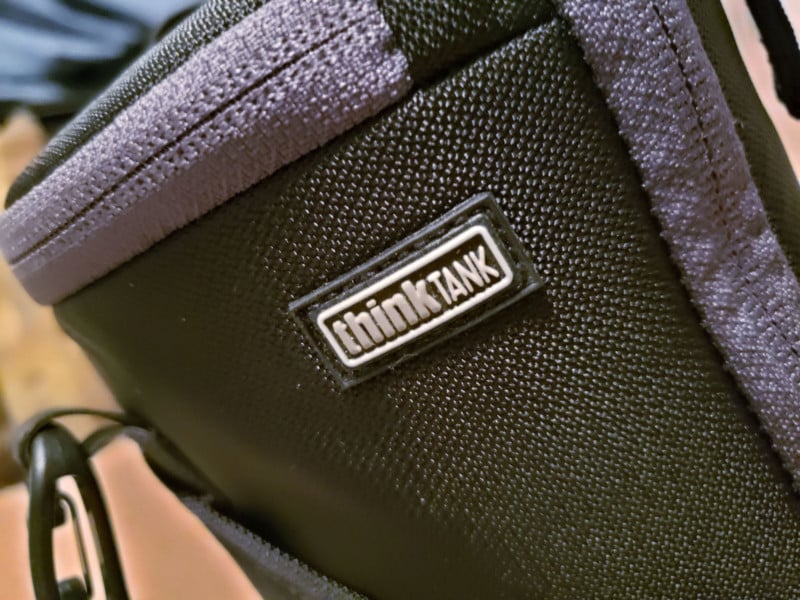 So I’m a mostly Micro 4/3rd shooter, and even my biggest lens only took up half the space available in this case, but I asked for the largest case because all the cases were pretty much identical, and I wanted to try a unique lens-case scenario. You see, I can actually fit three or so Micro 4/3rds lenses in this case. With padding from my camera bag, I could actually convert this into a little slim travel case. Throw in some batteries on the side pouches and even a flash and I’ve got a nice little on-the-go camera bag that compresses down to a very manageable size.

Keep in mind, though, that this isn’t what Think Tank designed these lens cases to do, but I was really impressed by what I was able to do with this simple lens case design. If you’re looking for something compact and versatile, and alternative to carrying an entire camera bag, consider this alternate use case scenario for the Lens Case Duo.

As I mentioned in the beginning, I’m not really a lens case guy. I prefer having every lens I own in a giant camera bag with me at all times, but I really like this lens case. If I was looking to for a way to provide added protection to my lenses, this system would definitely fit the bill for most scenarios. If you’re the kind of person who goes out on a shoot and only needs one or two extra lenses, and wants to travel light, getting multiple Lens Case Duos and either carrying them view the shoulder straps or on a belt would be an easy way to expand your shooting capability without encumbering your shoulders or back with a camera bag. Finally, the versatility of the duo, with its top or side opening design, it what makes it stand out from the pack to give the user ease of use while using in any configuration.

If you’re in the market for the lens case I don’t you can go wrong with the Lens Case Duo. They offer sizes for any lens starting from the Lens Case Duo 5, then 10, 15, 20, 30 and finally, 40. Furthermore, they’re all reasonably priced, starting at around $20 for the 5 and about $32 for the 40. You could easily build a rudimentary belt system capable of holding multiple lenses for well less than a hundred dollars. 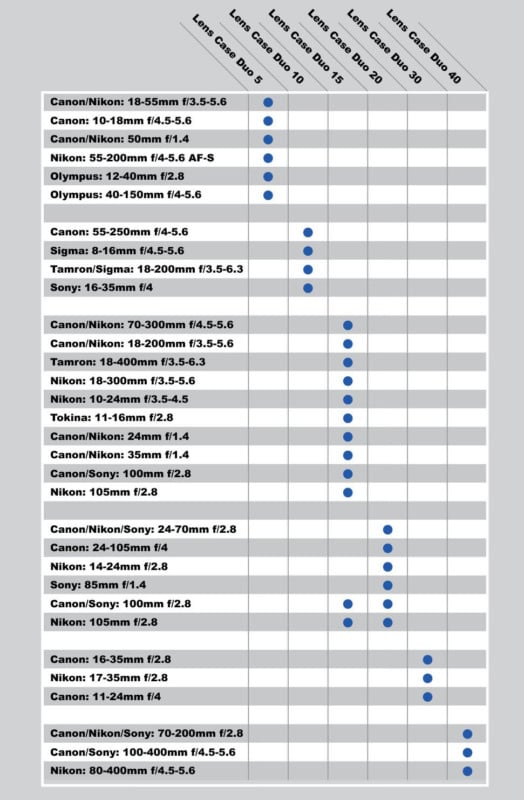 While I don’t personally know how much the Lens Case Duo will fit into my daily workflow and routine, I can say that it will be a permanent part of my growing bag/system collection and I can guarantee I’ll find uses for it in the future. If this system looks like something you need, I can confidently tell you it’s a well-designed product that is definitely worth your money.

About the author: David J. Murphy is a photojournalist and filmmaker who currently lives near Biloxi, Mississippi. The opinions expressed in this article are solely those of the author. Murphy began his career in 1999 after he joined the U.S. Marine Corps as a combat photojournalist. After subsequently working in NYC as a freelance photojournalist, Murphy is now a public affairs officer with the Air Force. Murphy is a co-host of the weekly visual journalism show Around the Lens. This article was also published here.