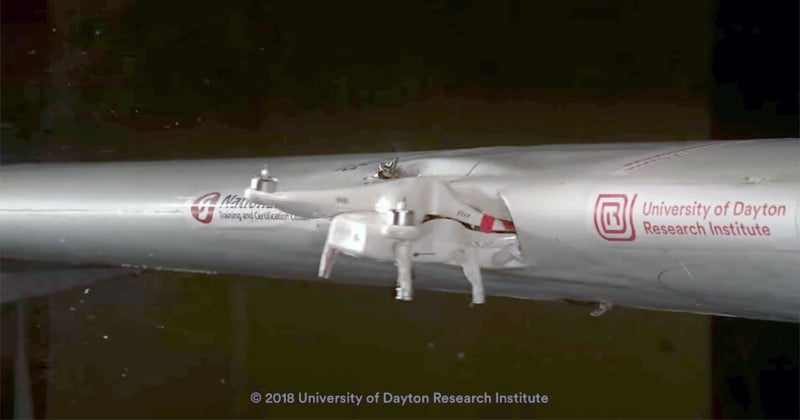 Last month, the University of Dayton Research Institute (UDRI) published an article and video showing what happens when a drone collides with an airplane wing at high speeds. The Chinese drone juggernaut DJI wasn’t pleased with the study: it’s demanding that UDRI withdraw the video and article, calling it “misleading.”

Here’s the 43-second test video that was released by UDRI — it shows a DJI Phantom 2 slamming into the wing of a small plane:

“At the altitudes where that plane would conceivably encounter a Phantom drone, it would fly less than half as fast — generating less than one-fourth of the collision energy.”

Schulman also says that the test was widely cited as showing what could happen to a large commercial jet, even though the airplane involved in the study is a tiny 4-seater.

After pointing out his technical gripes about the study, Schulman goes a step further and accuses Poorman and UDRI of conducting and publicizing the study for ulterior motives.

“Your video was not created as part of a legitimate scientific query, with little description of your testing methodology and no disclosure of data generated during the test,” Sculman writes. “Your blog post describes a similar test performed with a simulated bird that caused “more apparent damage,” but your decision not to post or promote that video indicates your bias toward sowing fear.

“Given UDRI’s wide-ranging publicity efforts in print, broadcast and online media, it seems clear that your misleading video and incendiary blog post seem designed to generate paid research work for UDRI at the expense of the reputation of drone technology broadly, and DJI’s products specifically.”

DJI is now demanding that UDRI withdraw the research, remove the video, and issue a correction to the public.