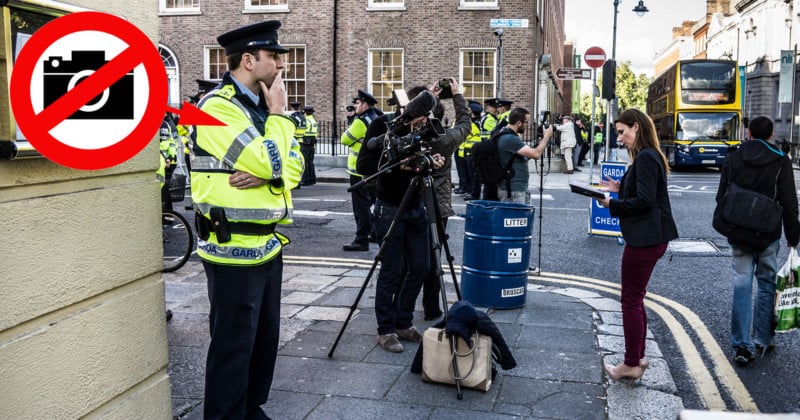 Ireland Minister for Justice & Equality Charlie Flanagan sparked controversy yesterday by saying he would support legislation that would ban photographing the Gardaí (Ireland’s police service) in the course of their duties.

Flanagan made the comments while a guest on RTÉ Radio One with broadcast journalist Sean O’Rourke. After his comments were met with backlash on social media, the minister took to Twitter in an attempt to clarify:

1/3 Today I was asked if it should be illegal to photograph Gardaí carrying out their duties. To clarify: I believe transparency is vitally important; I’m on record as favoring Garda body cameras. I also greatly value the role of the media in providing objective reporting.

2/3 However, I am concerned about the public order dimension of Gardaí having multiple mobile phones in their faces as they try to go about their policing https://t.co/0Zb1REwhv3 my experience press photographers are professional & do not impede Garda work.

3/3 This is regrettably not always the case where public order issues arise. The uploading of images of of Gardaí undertaking their duties on social media and consequent threats and intimidation is totally unacceptable to me and that why I am concerned.

Flanagan says that while press photographers don’t impede law enforcement’s work, the public sticking “multiple mobile phones in their faces as they try to go about their policing” and the “uploading of images of Gardaí undertaking their duties on social media” that result in threats are “totally unacceptable.”

The Irish Independent reports that Flanagan’s comments came following a criminal investigation into threats made against a garda on social media after the garda worked at the eviction of housing protesters.

After the garda’s name and photo were posted to Facebook, users reportedly threatened the man with “a bullet and cable ties.”

“I was surprised and disappointed by the support of such a proposal by the minister,” Séamus Dooley of the National Union of Journalists tells the Independent. “Mr Flanagan appears to be in favor of blindfolding the watchdog. It is vital all organs of the State operate in an open and transparent fashion.”

“While the criminal harassment or intimidation of gardaí is unacceptable, the general outlawing of photographing gardaí while on duty would be a grossly disproportionate response to the incidents that arise where technology is misused,” the Irish Council for Civil Liberties tells the newspaper, saying it would “criminalize ordinary members of the public for sharing information about public events.”

And less than 24 hours after Flanagan made his public comments, Taoiseach Leo Varadkar (the prime minister, chief executive and head of government of Ireland) eased concern by stating that there are no plans to introduce Flanagan’s proposed measure.

“The Government has no such plans” to introduce any ban and wants to “make this clear to people involved,” Varadkar states.

Image credits: Header illustration based on images by Sam Ballard and William Murphy and licensed under CC BY-SA 3.0 and CC BY-SA 2.0, respectively

iOS 12 is Out: Here’s What It Means for Your iPhone Photography