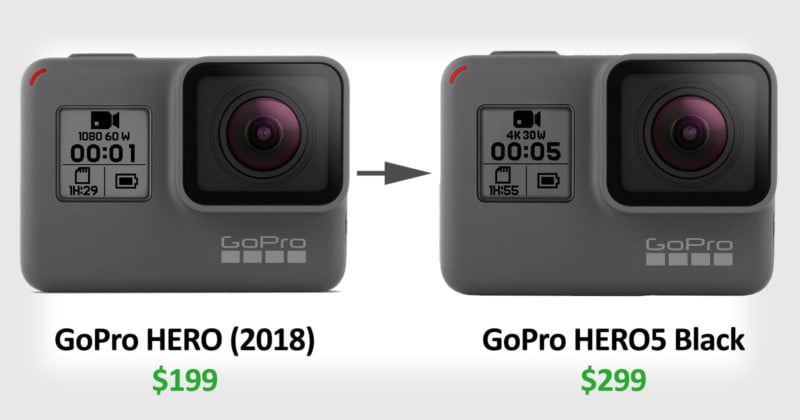 If you own the latest GoPro HERO (2018) action camera, get this: your $199 camera is reportedly actually a $299 GoPro HERO5 camera that has been “crippled” in firmware. And what’s more, you may actually be able to unlock the full potential of your camera yourself.

Physically, the GoPro HERO (2018) and GoPro HERO5 Black are virtually identical aside from minor labeling and cosmetic differences. If the latest reports are correct, then the two cameras actually share the same hardware specs — the HERO (2018) simply has features and specs that are downgraded in firmware.

Hypoxic reports that it was able to confirm that the HERO (2018) is actually a downgraded GoPro HERO5 by tricking the cheaper camera into loading the HERO5’s firmware.

“It loaded properly and all the features were unlocked,” Hypoxic writes. “Even GPS and 4K at 30fps work great! […] [T]here is no difference between a GoPro HERO and a GoPro HERO5 hardware-wise.”

Hypoxic says that it has decided not to publish the patch because “the legal risk makes it not worth it,” but that hasn’t stopped other owners from hacking their own cameras, confirming the findings, and sharing their code online.

The step-by-step process was posted to Reddit by a user name VirusDOSWalker a couple of months ago.

“I bought a Hero 2018 yesterday and within an hour had it hacked into a Hero 5 Black,” VirusDOSWalker writes.

Other users in the thread have confirmed the hack and posted their own versions, though some have been removed after the users purportedly received takedown requests and legal threats.

“We can surmise that GoPro created this cheaper version of the GoPro HERO5 to reduce component inventory without having to pay pricing reimbursements to their dealers,” Hypoxic writes. “With very little firmware changes, and a two resistor Bill of Material change, they came up with a very sneaky way to reduce inventory before the launch of the [next generation of GoPros].”

How to Photograph Bioluminescent Oceans