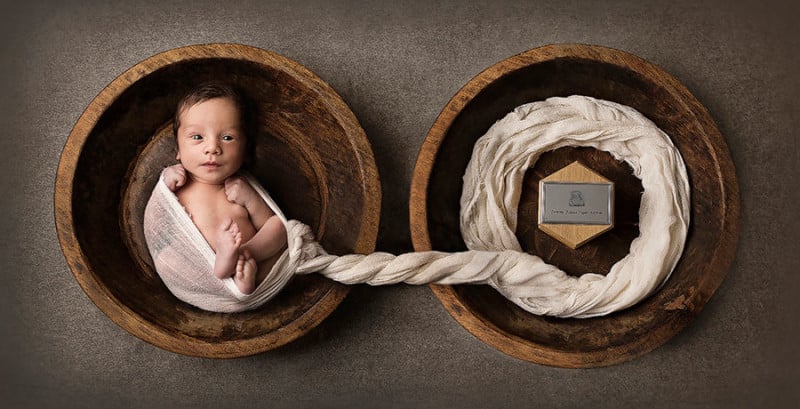 Stuff.co.nz reports that mother Cherie Ayrton learned the devastating news that one of her twins had passed away in the womb at her five-month ultrasound scan.

She still kept the newborn photo shoot she had booked with Simmons, and the photographer came up with the idea of capturing a portrait of baby Tiger with his brother Johnny’s ashes.

Simmons wrapped Tiger in a cloth, twisted it, and connected the other end to Johnny’s ashes to symbolize an umbilical cord.

“Sadly Johnny passed away during pregnancy but is still a huge part of this family,” Simmons says. “I wanted to photograph them together and to show their connection. I wanted them to be photographed in the same bowl to symbolize them sharing the same womb and wanted them to still be connected together as I’m sure they will be forever.”

“I am just so grateful she took such an awesome photo, it was all down to her vision,” Ayrton tells Stuff. “It was extremely emotional but it is nice to have such a strong image we can keep.”

Simmons’ shot was selected as the winning photo in the Newborn Portrait category in the September 2018 Portrait Masters competition put on by New Zealand photographer Sue Bryce. It was also judged to be the best overall photo from among the 7,000+ entries.

Image credits: Photographs by Sarah Simmons and used with permission

I Am NOT a ‘Self-Taught’ Photographer