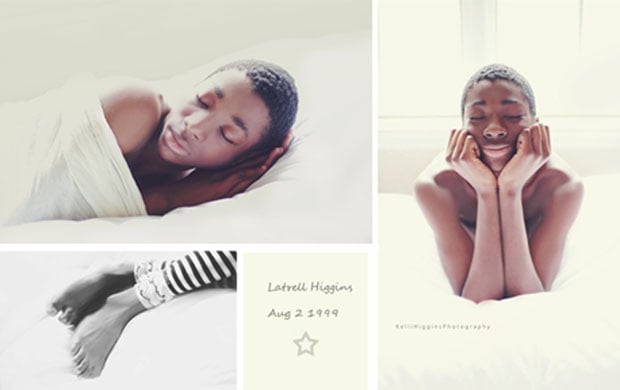 A couple of weeks ago, Florida-based photographer Kelli Higgins shared the newborn photos above on her Facebook page. Her caption read,

Here’s my sweet not so little Newborn! His name is Latrell and weighs 112lbs ;)

The are now now becoming a viral sensation, with the post being liked and shared thousands of times through the social network. You see, Latrell is Higgins’ adopted son, and although the photo concept itself may be a bit unusual, many people are touched by the symbolism in the images.

Latrell was adopted by Higgins and her husband around two years ago, when he was just 10 years old. Last month, as Higgins was talking about an upcoming newborn photo shoot she had planned, Latrell expressed that he wished he had baby photos of himself.

That’s when the family came up with an idea: why not grant Latrell his wish by shooting portraits of him now in the style of baby photographs?

The next day, Higgins and Latrell visited the family’s photo studio and turned the idea into a reality. As the photos are becoming widely seen online, Higgins tells Today that she’s excited that they’re causing people to think and talk about the idea of adopting older children.

Thus, the photos are warm, humorous, and for a good cause.

Image credits: Photographs by Kelli Higgins and used with permission

Photographer Captures Detailed Photos of the Sun From His Backyard