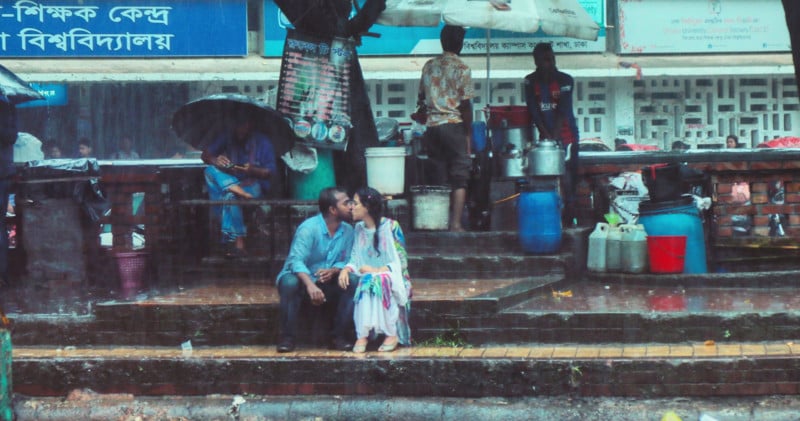 Bangladeshi photojournalist Jibon Ahmed recently posted this photo of a couple kissing in the rain to his Facebook page. While it may be a romantic image in your eyes, people in Ahmed’s country felt it was indecent enough that the photographer was reportedly beaten and fired.

The Washington Post reports that the photo shot at the University of Dhaka went viral and attracted many positive responses after Ahmed posted it. But it also attracted the attention of socially conservative members of the majority-Muslim country who believe that the photo overstepped bounds.

“Lovers are getting more audacious by the day,” one angry commentator wrote, according to News18. “Earlier these things were done in secret. Now they are doing it in broad daylight. The day is not far when they will be making love in public.”

Ahmed says he was roaming the campus for photographs last week when he came across the couple and captured their kiss. But after sending it into the newsroom of the outlet Purboposhchimbd, where he worked, the photo was rejected because the editors felt it would spark a negative reaction.

But the following days brought serious backlash. Ahmed tells the Post that he was beaten up by some of his fellow photographers and that his boss abruptly asked him to turn in his ID and laptop without explanation.

“They gave me no reason for the assault,” Ahmed tells News18. “I have not taken any legal action because these are my colleagues and I have to work with the same people in [the] future. […] [T]he office gave me no exact reason for firing me. I was just told that I can’t work here anymore.”

Khujista Nur-e-Naharin, Ahmed’s editor at Purboposhchimbd, says that the news outlet played no part in the attack.

“The attack was not related to the professional duties,” Nur-e-Naharin tells the Post. “These attacks were the result of his personal transactions. Everyone at the editorial level congratulates him for taking this picture.”

Despite what has transpired in the aftermath of sharing his photo, Ahmed says he won’t be derailed by the experience.

“Every job will have its own problems,” Ahmed tells News18. “But that does not mean that we quit. A lot needs to change in the world, including people’s point of view. A twisted sense of morality cannot dictate an artist’s work.”