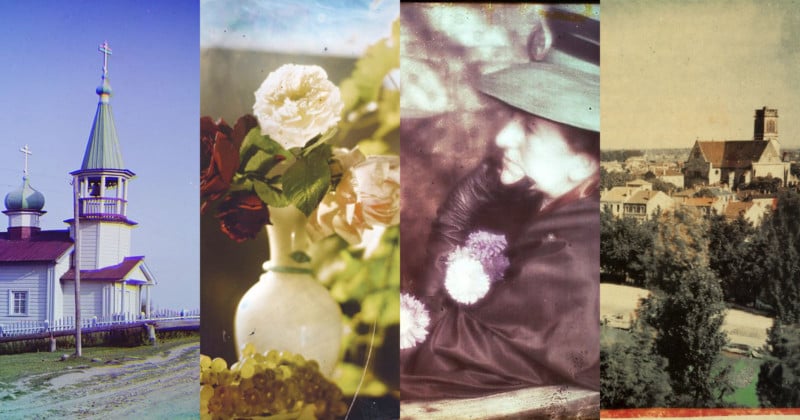 I ran across yet another case of Holy Cow Look At These Russian Photos, in which the photographs of Sergey Prokudin-Gorsky were showcased. In 1902, Prokudin-Gorsky learned the method of shooting three negatives (color separations) and then projecting them in registration through filters to produce projected color images.

He didn’t invent the process, although I dare say he may have fine-tuned it. From about 1909 to about 1920 he was commissioned to travel Russia taking color photographs, and he created an interesting archive of these color separations.

In recent years, these negatives have been dug up, digitally registered and colored, and now they pop up every year or so someplace with some sort of garbled historical information.

This is by no means the entire story of early color photography. Let us go to work and clear away some of the underbrush and get a slightly clearer picture of what was actually going on.

In 1861 James Clerk Maxwell performed a demonstration that proved out the technique Prokudin-Gorsky would eventually use (two years before the photographer was even born), based on the work of Thomas Young and Hermann von Helmholtz who had developed a workable theory of human vision based on trichromacy in the preceding decades. Combining light in the colors of red, green, and blue carefully one can produce the appearance of any visible color. More or less.

At this point, all you need is some black and white emulsions that respond more or less equally to the various colors, which don’t turn up for a few years, and you need to solve some mechanical problems. But the color separations method of color photograph-taking is essentially solved at this point.

Color prints (see below) from the technique of shooting three color-separated negatives exist from at least as early as the 1890s, and the methods have been in continuous use ever since in one form or another.

Proceeding from here, we have a couple of interesting paths to chase down.

Gabriel Lippmann invented a process for color photography around 1890 that does not rely on trichromacy. It actually records the wavelengths of light falling on the apparatus. This makes it, I think, unique. It has no digital analog, and the only thing that looks much like the method at all is holography.

Lippmann was awarded a Nobel Prize in 1908 for this work.

By passing white light from a diffuse light source through the developed plate, which is roughly a custom made diffraction grating, the original image wavelengths are reflected back strongly while other wavelengths are attenuated. Viewed under suitable light, from the proper angle, a Lippmann plate reproduces the original colors of the photographed scene.

Note: This is not a perceptually similar color made up of Red, Green, and Blue. It is an approximation of the actual original color spectrum.

Viewing a Lippmann picture must have been a strange experience. As I understand it, the thing is essentially a dirty glass plate. Place the dirty side against a mirror, and stand in the right spot, and a color picture glows into life.

The Lippmann process was difficult to execute, used very very slow emulsions, and was somewhat difficult to view. Notably, from the wrong angle, the photograph appeared as a negative! A final problem is that Lippmann plates could not be reproduced or printed.

While the process was never commercialized, and it is not clear that anyone except Lippmann himself ever used it, Lippmann’s process is a strong contender for the coolest photographic process ever. There have been recent, somewhat successful, efforts to revive it.

In 1893 John Joly invented what we would, in this modern era, immediately recognize as essentially a Bayer array. He manufactured a grid, a tiny checkerboard, of red, green, and blue filters. By exposing a plate through this grid, creating a positive black and white image from the exposed plate, and then viewing the result through the self-same colored grid, Joly was able to create a colored image.

This process was refined and made simpler to manufacture at scale by the Lumière brothers, who replaced the regular screen with a single-grain thick layer of potato starch grains, dyed in three colors, with the gaps between grains filled with lampblack. This essentially creates an irregular, randomized, Bayer-like array which can be applied like an emulsion. Microscopic enlargements of this material look rather like an abstract stained glass window and are quite pretty.

This layer was permanently bonded to the photographic plate. The plate was exposed and then processed using a reversal process. Thus the plate admits light through a red grain of starch proportional to how red the light falling at that point was, and similarly the other colors.

The resulting plates were essentially a color slide film and were commercially available in 1907. These were the dominant color film stock until the advent of Kodachrome. 100s of thousands of Autochromes were shot, and many still exist today. In particular, a large archive of 72,000 autochromes created under the direction of Albert Kahn, and another archive of 15,000 belonging to the National Geographic Society. Edward Steichen and many others shot a fair bit of Autochrome. It was entirely accessible to the amateur, being a fairly standard black and white reversal process.

Competitors to Autochrome existed, based on more regular colored grids, but being essentially identical otherwise. Dufaycolor is a notably successful example, but nothing rivaled the popularity of Autochrome. All of these processes share the idea of a mosaic of colored filters, permanently bonded to the film stock, used both for shooting and viewing.

Plates and films using these techniques were available until the mid-1950s.

Kodachrome appeared in 1935, followed closely by Agfacolor Neu in 1936. These are the first two examples of what would become the standard structure for color film.

Modern color film emulsions are made in layers, producing three color separations at once. The layers of the emulsion are separated by color filters. Light exposes the top layer, is filtered, exposes the second layer, is filtered again, and exposes the third layer of emulsion. Developing the whole thing produces three layers of black and white negatives, which are then converted very carefully, in place, into three monochrome layers in three dye colors. The filters embedded in the film for shooting, and the colors of the dyes in the final developed film, are selected appropriately for positive or negative uses.

An important element here is that having done away with the colored mosaic filter, you no longer need to register your image precisely with the filter in order to reproduce the image colors. You can duplicate one color image as another color image using the same or similar materials, without having to line the red cells precisely with red cells, blue with blue, and so on.

Neither Lippmann’s process nor Autochromes particularly solve the problem of color printing. Early processes for color printing universally relied on the method of color separations.

While multiple materials were used, the general theme is roughly the same. Use the three different negatives to make three different pictures, each tinted an appropriate color, and then combine them. One process made three black and white transparencies from the three negatives, and chemically dyed the silver in Cyan, Magenta, and Yellow (the familiar CMY of CMYK printing). Placing the three resulting images atop one another produces a color image.

Gum-bichromate processes allow monochrome printing in a variety of colors from a black and white negative. By appropriately, and carefully, printing each separation negative together on a single sheet of paper, a color image could be produced.

The carbon and dye transfer processes both work by photo-chemically hardening gelatin in the pattern of each of the three negatives, and washing away the softer gelatin. The carbon process dyes the remaining gelatin suitably for each of the three colors, strips the hardened and dyed gelatin off the backing, and layers the three sheets of this dyed gelatin together to make a print. The dye transfer process instead uses the gelatin as a sort of printing plate, infusing each gelatin image with dye and then pressing a sheet of paper down onto the dyed gelatin to transfer the dye to the paper. Repeating this three times for each of the three colors produces a color print made up entirely of dyes, with no gelatin.

Until the modern layered emulsions were available, the only practical approaches to printing multiple copies of an image relied on using color separated negatives, because it was the only shooting method that did not require a precisely aligned color filter mosaic. Most modern color photographic prints use a layered emulsion, similar to that of film, and similar chemistry to produce a colored print similar to that of a carbon print except that it is made in-place, all at once. 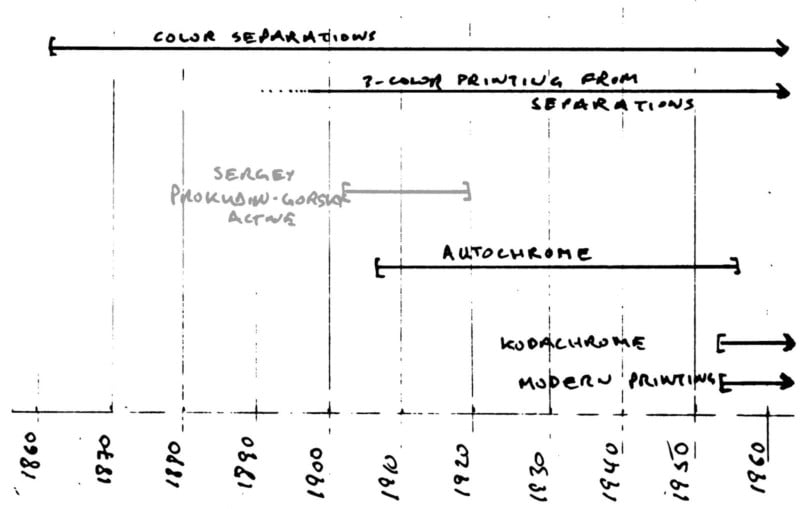 It is perhaps fun to notice how little there is that is new under the sun.

Lippmann’s method is, apparently, far too cool to have a modern analog. Autochromes and their variants are clear predecessors to the Bayer and X-Trans arrays in almost universal use in digital cameras today. The Foveon sensor resembles a layer film emulsion. Color separations are still used in scientific instruments, usually built behind an optical splitter of some kind rather than making three separate exposures, however.

And there you have it. It’s a little more complicated and more interesting than one admittedly prolific and capable Russian fellow.

About the author: Andrew Molitor writes software by day and takes pictures by night. The opinions expressed in this article are solely those of the author. He’s based in Norfolk, Virginia, and does his best to obsess over gear, specs, or sharpness. You can find more of his writing on his blog. This article was also published here.

Samsung Phones Are Sending Random Photos to Other People

Do a Background Check When Shooting a Wildlife Photo