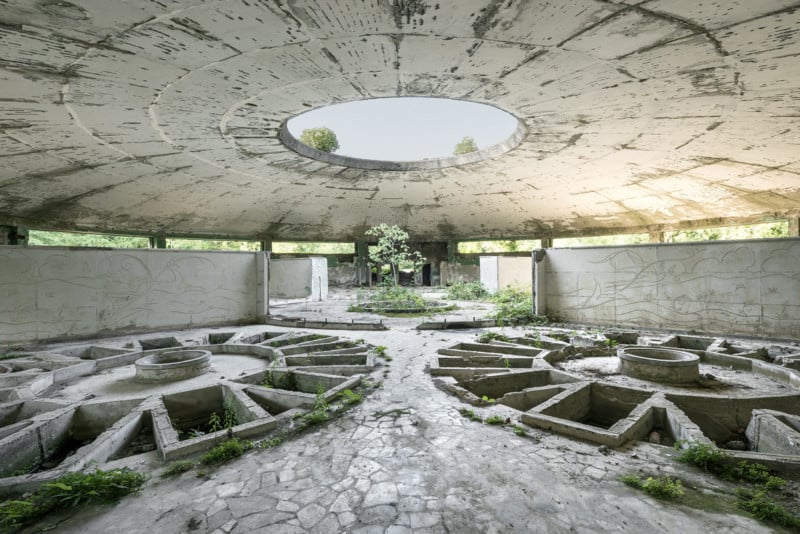 The Soviet Utopia: sending your hard-working state citizens on a health holiday to one of the empire’s many sanatoria. Originally conceived in the 1920s, these USSR sanatoria offered a combination of health and medical benefits alongside thermal baths and spas. These institutions were once among the most innovative buildings of that era.

The system was brilliant: holidays were booked through a state-funded voucher system. Guests of sanatoria were carefully monitored by health professionals during their stay. The Soviet worker returned home with renewed strength, in good health and full of energy.

It’s 2018 and these sanatoria became curious relics of the former USSR. Many of them are abandoned. They no longer serve any purpose other than being vestiges of another era.

For this series, I photographed many of the remaining sanatoriums in Georgia. The Caucasus lived up to be perfect for the construction of spa resorts, mainly due to the presence of hot mineral springs and water containing radioactive isotopes. Resorts focused on balneotherapy to treat people with circulatory, respiratory and pulmonary diseases. The people loved it.

At its peak, the sanatoria attracted a couple hundred thousand visitors a year. High-ranked officers and lieutenants from the Russian Army relaxed at these resorts – even special dedicated military sanatoria were constructed, serving only military personnel. With the majority of the USSR leaders based in Moscow, they simply connected these spa resorts with a direct train line to the capital. In Mother Russia, anything is possible. Stalin frequented the baths many times and a shrine devoted to the communist leader still reminds us of those glorious times.

Dissolution of the Soviet Union

However, the USSR era ended. The once-mighty Soviet Union got dismantled. It’s the nineties and the socialist nation gets split up into splinter states, each gaining independence, and sovereignty. The influx of health seeking Russians came to a halt. The visitors dropped. The magnificent sanatoria fell into decline.

One by one these magnificent buildings became abandoned. Today, only a very small portion of the spa resorts are active. It’s heartbreaking to see the ruins of these grand buildings left in dismay. But they’re not completely abandoned… these crumbling complexes now house refugees who were displaced from their homes during the Abkhazian-Georgian war. These people made a new home amongst the debris of the ruins. Some have access to water, some have electricity, some have basic comfort, but there’s one thing these refugees don’t have: a clear outlook on what the future will bring. Meanwhile, they remain in exile.

What will happen to these sanatoria? During my visit, I could see that little by little things are put into motion. Railway stations are being renovated, whereas I expected them to be in a very bad state. I saw many gardeners maintaining the lush gardens and landscapes. I noticed security keeping an eye on the still active buildings. On all of my visits, I had a warm welcome by the kindest people inviting and showing me around into the former ballrooms, leisure rooms, patios and private rooms. The outdoor pool had fresh water, the roads in and around many buildings were being asphalted anew.

Maybe, just maybe, the utopian dream is not lost.

About the author: Reginald Van de Velde (Belgium, 1975) scouts the unknown and the unseen. As a wanderer of wastelands, he journeys all over the world, trying to capture the momentum of splendor still undisturbed by the turmoil and temptations of modern society. He is a vagabond for lost beauty, a chronicler of forgotten magnificence. You can find more of his work on his website and Instagram.

The Importance of the Female Lens in Photography