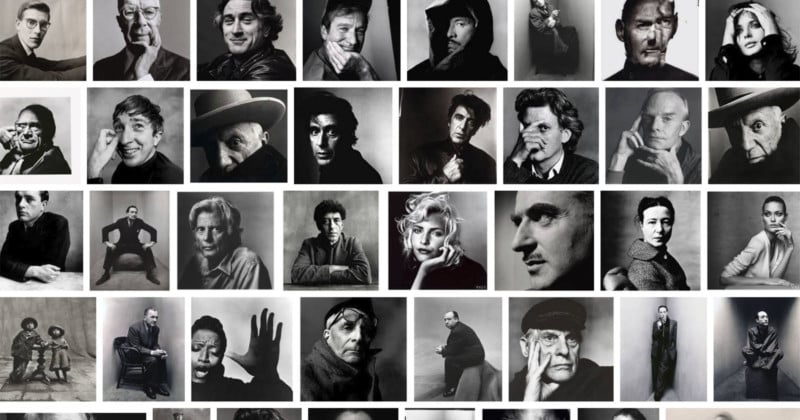 Irving Penn is either the best or second best portrait photographer of all time. Depending on the day, he’s either ahead of or behind Richard Avedon. At least that’s what I think.

He made some of the most iconic photographic portraits in history, including those of Pablo Picasso, Marcel Duchamp, and Truman Capote.

His work has been exhibited at the Metropolitan Museum of Art, the Museum of Modern Art, the National Portrait Gallery at the Smithsonian, The Art Institute of Chicago, the J. Paul Getty Museum, and many top galleries.

Irving Penn was also one of the greatest fashion, beauty, and still life photographers ever, and served advertising clients like Clinique, Chanel, Issey Miyake, L’Oreal, Versace, and even Jello Pudding!

“Mouth (for L’Oréal),” New York, 1986. On view in “Irving Penn: Beyond Beauty” at the Dallas Museum of Art this Friday, April 15, 2016 through August 14, 2016. Organized by the Smithsonian American Art Museum, the exhibition is the first retrospective of Penn’s work in nearly twenty years. #IrvingPenn #irvingpennphotography #upcomingexhibition #dallasmuseumart @dallasmuseumart #americanartmuseum

He even single-handedly revived the art of platinum printing.

PDN named Mr. Penn one of the 20 most influential photographers of all time, and for good reason. Pick up any fashion or arts/culture magazine, and you’ll see portraits, fashion, and advertising pictures directly influenced by Mr. Penn.

If you are shooting portraits, fashion, or still life pictures, you have been influenced by Irving Penn, whether you know it or not.

So what can we learn from Irving Penn? An awful lot, starting with…

1. All Photographers Are Insecure. Even Irving Penn!

I made a pretty good case that Irving Penn was one of the best photographers of all-time. But he was insecure, just like the rest of us. In 1991, the made an incredible revelation to the New York Times:

In the studio, too, I like it to be in no way grand. Nor do I feel grand, because I’m full of doubts still about the ability to get the picture I’m going to take.

Remember, Irving Penn wasn’t just a great portrait photographer. He was also an incredible fashion/beauty photographer, and a groundbreaking still life photographer. You can argue that he’s top 3 of all time in all 3 genres. And if you look at Beyond Beauty, you’ll see that he was even good at street photography!

Yet Irving Penn was still insecure. And perhaps that’s what drove him. Maybe he had something to prove to himself every time he picked up a camera.

2. Make the Portrait Simple, and About the Subject

While Irving Penn’s portraits are clearly thought out and planned (more on this below), they are also simple. He commonly used a plain canvas backdrop, with zero props beyond a person’s clothing.

When you have no distractions, what do you focus on? The person sitting in front of your camera.

Remember the first commandment of portrait photography: “A portrait is about the subject and nothing else.”

So by stripping away all the extras, Mr. Penn’s portraits could only be about the subject, instead of a piece of clothing or a distracting background element. And as you study his portraiture work more and more, you’ll notice one missing element in most of his portraits – color.

3. Make a Decision About Color vs. Black and White

Mr. Penn did much of his fashion, beauty and still life work in color.

Let’s think about why.

Here’s what I think:

1. He wanted a distinct separation from his own commercial work.

2. He wanted a consistent “visual fingerprint” for his portraits over his lifetime.

Now, deciding between color and black and white is a personal decision. I can’t tell you what decision is right for you. But what’s important is that you just make a decision.

Before he became a photographer, Mr. Penn was a painter. Later, he was an art director for Saks Fifth Avenue. Then he moved to Vogue’s art department to create magazine layouts, where he was asked to create photos by legendary art director Alexey Brodovitch. And that’s one reason his pictures look ‘designed.’

The more you look at this portraits, they more you see shapes and lines.

Celebrating on the day of his birth, the German-American architect, educator, and Bauhaus founder Walter Gropius. Reflecting on his use of the corner setting, Penn remarked: “Sometime in 1948, I began photographing portraits in a small corner space made of two studio flats pushed together, the floor covered with a piece of old carpeting. A very rich series of pictures resulted. This confinement, surprisingly, seemed to comfort people, soothing them. The walls were a surface to lean on or push against. For me the picture possibilities were interesting; limiting the subjects’ movement seemed to relieve me of part of the problem of holding on to them.” (Passage, 1991) “Walter Gropius,” New York, 1948. © The Irving Penn Foundation #waltergropius #architecture #Bauhaus #modernarchitecture #bauhausmovement @bauhaus.movement #artinstitutechicago @artinstitutechi #IrvingPennportrait #irvingpenncorner

And sometimes, these unusual design elements were created by his subject’s bodies. Look at the weird symmetry created by Ingmar Bergman’s hands:

Ingmar Bergman was born on this day in 1918. See Irving Penn's portrait of the great director at the "Irving Penn: Centennial" exhibition, in its final weeks at The Met. . Ingmar Bergman, Stockholm, 1964 #IrvingPenn #IngmarBergman #blackandwhite

5. Use Directional Lighting to Make Your Portraits ‘Snap’

Many Irving Penn portraits are quite contrasty. Meaning, the bright tones are fairly bright and the dark tones are fairly dark. In many of his pictures, the lighting is fairly directional (it comes from one side of the frame), creating a dramatic fall-off across the frame.

You can see that in this portrait of Marlene Dietrich:

Not every portrait must have high contrast. But contrast forces the viewer’s eye to move around the frame and naturally leads to the brightest part of the subject, which is typically the face. That can give your photos a certain “snappiness” that you can’t get from more even-toned pictures.

Mr. Penn often shot his pictures from unusual perspectives. Many of his most famous close-up portraits were shot from low angles with nontraditional lens choices.

He captured this unique image of Court Justice Ruth Bader Ginsburg from a low angle with that seems like a wide-angle lens:

-⠀ This portrait of Justice Ruth Bader Ginsburg was taken in New York in 1993, the day before her oath of office.⠀ .⠀ Irving Penn: Centennial⠀ Now open at The Met⠀ .⠀ #IrvingPenn #TheMet⠀ #NewYork #exhibition⠀ #art @metmuseum⠀

And in this portrait of humorist and screenwriter S.J. Perelman, he used what looks like a normal lens – unusual for such an extreme close-up:

7. Create the Right Environment for Your Portraits

At a 1964 workshop held by the aforementioned Alexey Brodovitch, Mr. Penn said: “I try to find a person at a very serene, true, and fairly restful moment.”

His studio was known to be very quiet and clean – supportive of a “fairly restful moment.” Former Vogue Editor-in=Chief Diana Vreeland once said “Irving Penn’s studio is like a cathedral. David Bailey’s studio is like a nightclub.”

Now let’s hear model Erin O’Connor talk about working with Richard Avedon on a Versace ad campaign in the 1990s:

He was a mover and shaker as well, never stood still. Yeah, he’s dynamite and he would really move and move and that was kind of the subconscious cue for you to move… he was just full of enthusiasm really.

I’m a high-strung, anxious person by nature. But the artist in me seeks a sense of calmness. So when I’m shooting portraits, I play quiet, relaxing, ambient music.

Think about what makes sense for you.

And oh yeah, I highly recommend getting an Amazon Echo or some other smart speaker for your shoots. Being able to call up any music with your voice without putting your camera down is incredibly convenient. I also tell my subjects they can tell Alexa to play anything they want.

Irving Penn photographed countless celebrities, supermodels, and politicians. But he embraced all different kinds of people from all around the world.

And he traveled the world photographing the people of Peru, Benin, Crete, Morocco, Nepal and New Guinea, just to name a few.

In December of 1948, after finishing a fashion assignment for Vogue in Lima, Irving Penn stayed in Peru and traveled to the high-altitude region of Cuzco. He rented a local photographer’s studio for three days and recorded many people who visited the large Christmas market. #IrvingPenn #irvingpennphotography #Cuzco #worldsinasmallroom “Two Mestizas from Puno,” Cuzco, December 1948

Here’s an an old 8mm film of Irving Penn photographing people in Morocco (too bad there’s no sound!):

Portrait photography is not just about capturing moments and capturing a glimpse of someone’s personality — it’s also about expressing a common humanity.

Likely inspired by the visual surprises of the test strips he made in the darkroom, in 1985, Penn experimented by printing only this detail from his 1957 portrait of Picasso, adding splatters of platinum sensitizer to give the fragment a bold, painterly reinterpretation.⠀ #picasso #irvingpenn #platinum #experiments

Mr. Penn began his photography career in 1943, but he wasn’t old-fashioned and stuck in his ways. He was always trying new things, even at an old age, as you can see in this timeline from tiki-toki.com.

In 1964, he began experimenting with platinum palladium prints. Here a video from former assistant Vasilios Zatse, who explains the technique:

In 1967, he started photographing flowers for Vogue. In the 1970s, Mr. Penn created unusual still lifes from discarded cigarettes and other debris. He also did still life photos in the Vanitas tradition. He took up painting and drawing again in 1987. And in the 1990s, he experimented with moving light photography.

So if Mr. Penn was alive today, he’d probably have a hell of a time playing around with Photoshop!

10. Irving Penn Proved You Can Be a Photographer Until the Very End

Irving Penn was a working photographer until the end of his life. He died on October 7, 2009. His final credit in Vogue was the August 2009 issue.

I remember I bumped into someone who was then working for Irving Penn, so I asked how he was, and they said ‘Oh, he only likes to work now three days a week’. And then at that point, I said, ‘But he is 91!’

Yes, Irving Penn was shooting 3 days a week at the ripe old age of 91.

Many great photographers work until the very end. Richard Avedon, Mr. Penn’s friend and rival, passed away in Texas at 81 while on assignment for The New Yorker magazine.

We’re talking about death, but let’s end on a positive note: you can enjoy photography for your entire life. That’s awesome!

Shooting Wedding Photos on the ‘Little Troll Tongue’ in Norway