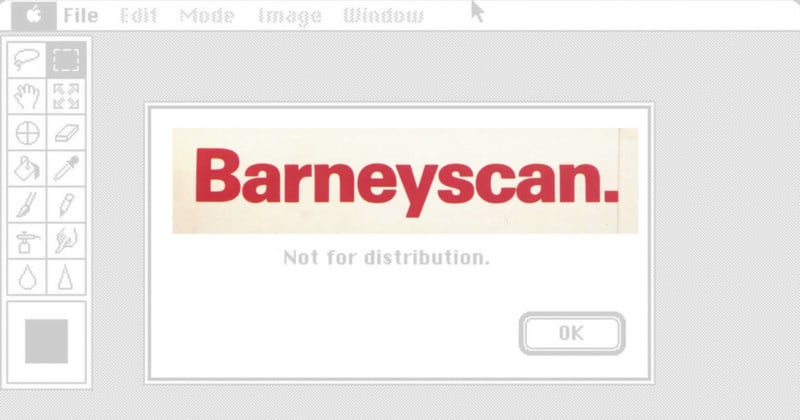 Did you know that before it became the most dominant photo editing program on Earth, Photoshop was first sold as “Barneyscan XP”?

After creating their original program, brothers John and Thomas Knoll began looking for investors and customers. The first company to bite wasn’t Adobe, but rather a Berkeley, California-based company called Barneyscan, which created and sold the first high-quality 24-bit desktop color scanner.

Barneyscan was having trouble attracting buyers because photographers couldn’t do much with the photos digitized with the scanner.

“Though the scanner arrived on the market in late 1988 […] there was little interest in our product,” wrote Barneyscan co-founder Steve Schaffran in 2010 at TDI. “Since there was no good software to do anything with the pictures, we created problems for people. Even displaying them in full resolution was impossible for most.

So when they were introduced to Photoshop, Barneyscan saw that it was the missing piece of their puzzle. Here’s Schaffran’s account of receiving his first demo:

John showed me version 0.35 as I recall, and it was already a knock-out. It could resize (so now people could see our pictures), and it could sharpen, soften, lighten, darken, adjust curves, and make dozens of other amazing transformations I had never seen nor could comprehend.

One of the transformations, however, made my hair stand on end: it could flip a color picture from the network, green, blue color space of the computer display to the cyan, magenta, yellow, black color space necessary for exposing printing plates for printing color. That meant that a $15,000 bundle of our scanner plus Photoshop 0.35 plus to Mac II was in principle to competitor for the $1,000,000 to $3,000,000 color scanning and retouching solutions then used in the printing industry. If we could only strike a deal, we were sure to sell some scanners.

Thomas Knoll was asking for $300,000 plus 18% of income for rights to Photoshop, but Barneyscan made them a different offer: bundle the software with the Barneyscan scanner, and the Knolls would receive a $250 royalty with each sale. The software was also modified so that the program would only function if a Barneyscan scanner was attached to the computer.

“For practical purposes, the Barneyscan was a 10 thousand dollar lock,” Schaffran says.

In 1989, Photoshop Version 0.65 was branded “Barneyscan XP” and bundled with Barneyscan’s film scanner. Peter J. Sucy shares this brochure that advertised Barneyscan and its new software: 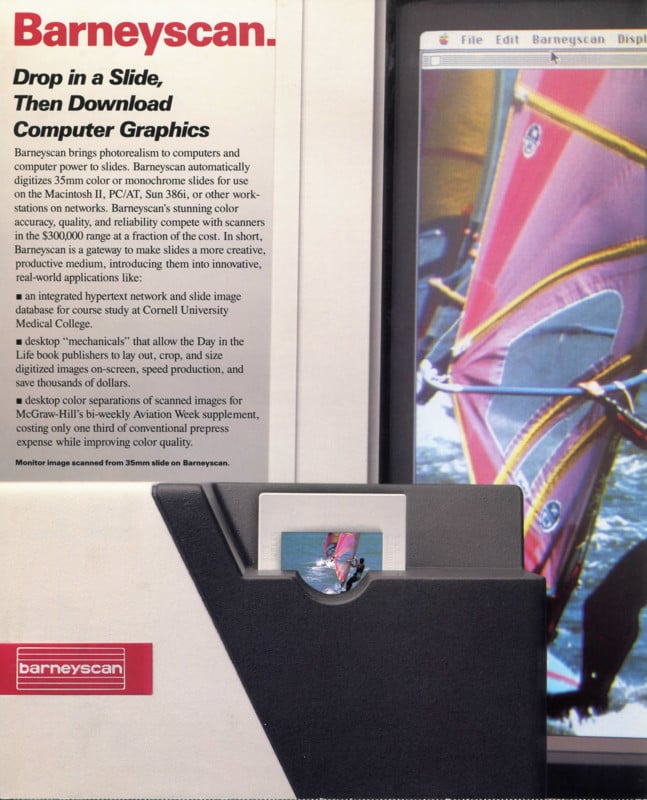 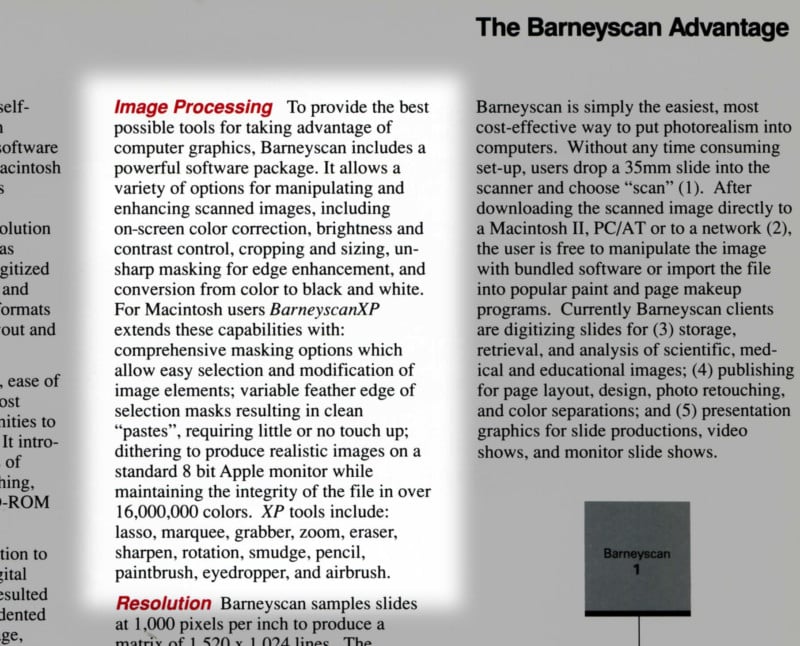 Barneyscan XP was a success and received more attention than the scanner it was included for, writes Stories of Apple.

But Barneyscan’s decision to license a rebranded version of Photoshop rather than acquire the software outright — thanks in large part to a single investor that was adamantly against the deal — opened the door to Adobe striking a deal with the Knoll brothers. Less than a year after “Barneyscan XP” launched, Adobe art director Russell Brown became interested in Photoshop, prompting Adobe to license and distribute the Knoll brothers’ software itself.

And that’s how Adobe Photoshop was born.

(via Quora via Boing Boing)