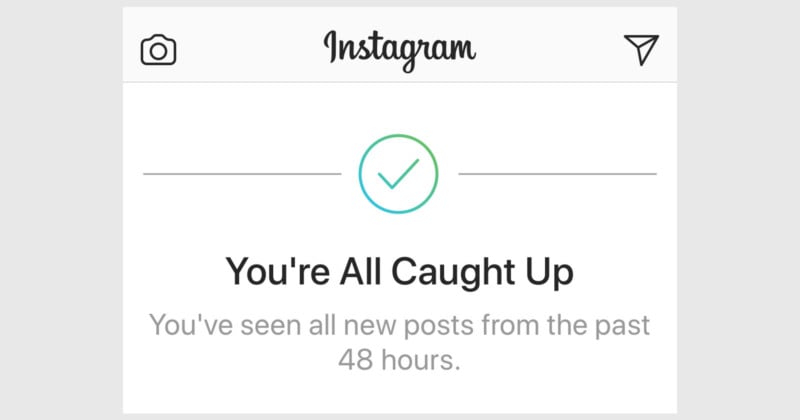 Instagram’s decision to move away from a simple chronological feed to an algorithm-based stream can make it difficult to keep track of whether you’ve seen everything “new” from people you follow. But help is on the way: Instagram is now testing an “All Caught Up” message to let you know when you’re up to speed.

TechCrunch reports that some users have begun seeing the feature — Instagram often tests prospective features among a subset of users prior to rolling it out to all — while scrolling through their feeds. Once you’ve browsed through everything new over the past couple of days, Instagram will insert a message mid-feed to alert you.

The message reads: “You’re All Caught Up – You’ve seen all new posts from the past 48 hours.”

While the message seems to suggest that the alert covers all posts from everyone you follow, Instagram declined to confirm to TechCrunch that an algorithm isn’t involved in determining what’s worth showing you.

The feature is part of a movement (called “time well spent“) among social media services to help users keep track of time in order to promote wellness. Another big one that’s on the way is a “Usage Insights” section in the app that will tell you how much time you spend browsing Instagram.

We're building tools that will help the IG community know more about the time they spend on Instagram – any time should be positive and intentional.

Telling users when they’re all caught up allows people to end their feed-scrolling without FOMO, so it could negatively impact Instagram’s engagement and bottom line. But the hope is that by prioritizing the well-being of users over profits, everyone wins in the end.