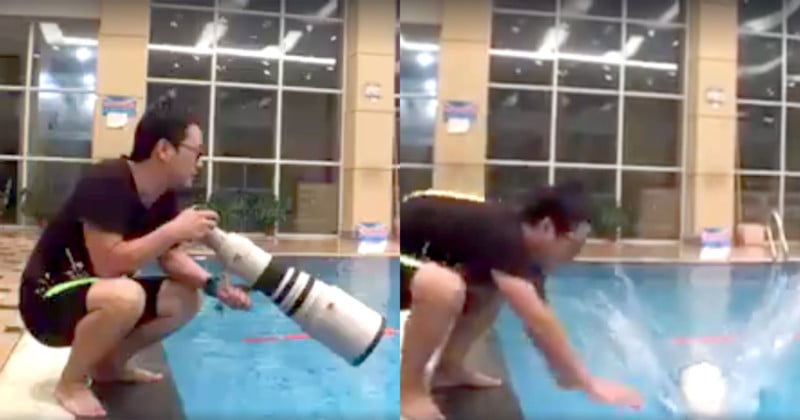 There’s a viral video floating around that appears shows a photographer accidentally dropping what looks like a Canon EF 500mm f/4L IS lens into a swimming pool while crouched at the edge.

Photographer Steven Ho of Macau, China, posted the video to his Facebook page, where it quickly received hundreds of shares and tens of thousands of views:

“What if it were you?” Ho asks in the caption.

If this video wasn’t faked, then the photographer may have taken over $7,000 worth of Canon DSLR gear for a swim: a high-end 5D-style DSLR could be around $2,000 used, and the original Canon 500mm f/4L IS still sells for around $5,000 used (depending on condition).

Thankfully, though, it seems likely the video was faked to prank the Web. Commenters online point out several indications — things like (1) the photographer is dressed like he’s ready for a swim, (2) the drop doesn’t look very accidental, (3) the use of 500mm in reach relatively close to the “action”, and (4) the fact that the camera kit seems to float instead of sink.

There doesn’t seem to be much info online regarding the buoyancy of large, high-end lenses. If you’ve had the unfortunate experience of dropping one into water, feel free to chime in and let us all know whether it floated or sank immediately.

Instagram’s ‘All Caught Up’ Feature to Ease Your FOMO