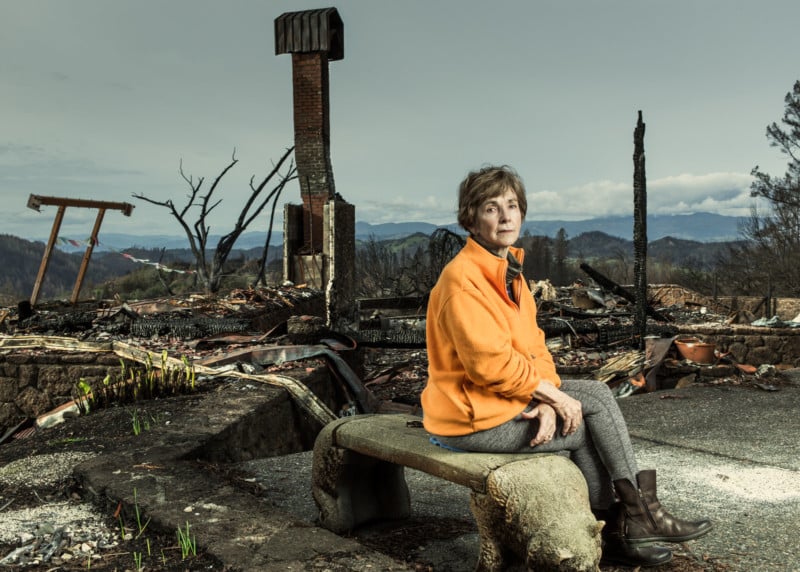 About six months ago, I created a portrait series titled Ashes Fell Like Snow, photographing people affected by the Northern California wildfires and gathering their stories to share with the world. Creating this collection of portraits required much effort in a short span of time.

The evening of October 8th, 2017, a blaze started in the city of Calistoga in Napa, CA. It headed towards the city of Santa Rosa, fanned by strong Diablo winds. By the time the last of the flames were extinguished, the Tubbs fire, as it came to be known, burned down over 5600 structures, or five percent of housing in the city.

It’s become the costliest wildfire in California history. A couple of weeks after the start of the fire, I traveled to Santa Rosa with the plan of photographing the people affected and collecting their stories. I knew once the fires were out, the reporters would pack their cameras and move on, as would the public. But given the level of destruction and the fact that many lost everything they had, the people affected by the fire couldn’t just “move on.”

In fact, many estimate that the recovery efforts will take at least five years. I felt the best way I could contribute as a photographer was to photograph the people in the community and share their stories with the world. Over hectic eleven days, I photographed and interviewed 50 people over the course of 30 shoots. They included everyday folks such as nurses, farmers, mechanics, doctors, engineers and retirees; the mayor, sheriff and other city officials; active and retired pro cyclists; and pillars of the community such as Jean Schulz, the widow of cartoonist Charles Schulz (seen in the lead portrait above). Whether you were a blue-collar working stiff, a middle-class family, or a millionaire, the fire did not discriminate and people across all demographics lost their homes and all material possessions. The shoots were chaotic and stressful. Even with the fire out, the air was still smokey and the lungs hurt from breathing in the contaminated air. Apocalyptic scenes were everywhere with burned out shells of cars; pools of melted metal; blackened skeletal trunks of trees; and ashes, twisted metal beams and brick chimney stacks marking where houses once stood.

Photographing people amidst their losses meant walking in the rubble and ashes to set up the lights and camera. Looking back six months after the fact, the experience is still vivid and I see it through various perspectives. One thought that struck me was, looking at it from purely a photographer’s logistical perspective, I marveled at how quickly I was able to move. And the one tool that greatly helped in that regard was the use of battery-powered monolights. Until recently, I would’ve never considered monolights. I rose up through the ranks in the studio environment and my style of portraiture is the result of the equipment and working methods found in the studios; low ISO for detail, small apertures for sharpness and matching or overpowering the ambient when on location. This means using studio strobes for the power and accuracy. And since I don’t have much time with many of the people I photograph, I have to shoot fast and the equipment needs to keep up with me.

When I started shooting on my own, I bought a Profoto Acute kit. The Acutes had the power, accuracy and the durability that I needed. Monolights in comparison were horrible; flimsy, imprecise, badly designed, seemingly an afterthought from the manufacturers. It was top heavy on stands. And the worst part was changing the output once the light was set in place, often high up and out of easy reach. It’s not a very efficient way to work if every time you had to change the power, you needed to lower and raise the light or go up and down a ladder in order to reach the dials.

But there were two problems with the studio strobe kit. One, they were heavy. The kit, Pelican case, and the necessary accessories and extension cords quickly added up in weight. The other issue is that since they are AC powered, they couldn’t be used on location. I tried ganging up speedlights but they were too small, too underpowered, too cumbersome to set up and too slow for what I needed. So I looked into various possibilities in solving those two issues without finding a satisfactory solution. One of the possibilities were the Profoto D series monolights. They were the first monolights I felt were well done. They corrected the errors of the past monolights with good design, solid construction, and accurate output but what really got my attention was the integration of the Air system, which solved the biggest problem of using monolights: you can change the output remotely! But the D series is still AC powered, so that didn’t solve the location shoot issue.

What did address that problem was the battery-powered B1 series monolights. Finally, a monolight with accurate output, the ability to change the settings remotely and powered by batteries. When it came time for me to buy some monolights the choice came down to the Profoto B1 versus the Broncolor Siros L. I eventually chose the Siros for the following reasons: the Siros has the exposed flashtubes versus the recessed flash tubes of Profoto B (I can’t for the life of me understand why Profoto would recess their flashtubes! A colossal mistake in design in my opinion as it does not allow for optimal use with certain light shaping tools), higher max output of 800w/s vs. 500 w/s, more powerful batteries, and a cheaper remote for Siros RFS 2.2 at $112 vs. $420 Profoto Air remote.

I didn’t need the TTL capabilities of the Profoto B1 since I’m comfortable and pretty fast at dialing in the power. I do like the slightly smaller form factor of the Profotos versus the Siros, which feels a bit bloated in comparison but I guess you can’t have everything. (Other companies, especially Godox, are doing really interesting work but I wanted reliability and assurance of customer support if there were issues, hence my choice between Profoto and Broncolor). The eleven days were chaotic. In between shoots, I would make many phone calls, emails, and texts reaching out to people to photograph them, planning out the next day while working on the present day. I averaged around three shoots per day. The busiest was five shoots in a day! This meant, driving to the location, take out and set up equipment, quickly figure out the shot, shoot, pack up, and repeat.

And this location shooting brought on issues I normally don’t have to think about. I had to constantly think “Don’t step on the many nails littering the burn sites. That drywall you’re about to step on will just crumble. Careful with all the sharp edges of burned framing and metal beams and rods sticking out every which way. Put on your air filter mask so you’re not breathing in particulate matters.” And throughout all this, remain calm and be present and listen to the people who have lost everything but are taking the time to share with you their experiences, because in addition to the photos, I was interviewing everyone photographed about their experiences. Working in this chaos, it helped that setting up the Siros L meant not having to deal with power packs, cables or AC cords. With a built-in RFS receiver, I didn’t even have to connect a PocketWizard receiver; One less thing to mess with. Once I was happy with the position of the light, I could fine-tune the output from the camera, dialing in the changes via the remote transmitter.

The lighting conditions ranged from first light in the morning to mid-day sun to pitch black in the evenings, as well as shooting in hotel rooms and offices. The wide power range of the Siros made it possible for me to blend the strobe with the lowest ambient light to overpowering the sun allowing me to use the Siros in a wide range of lighting conditions. It was so much easier and faster working with the Siros. All the times unloading, setting up, moving, then tearing down and packing the gear adds up and at the end of the day, my body wasn’t beat up from wrestling with heavy equipment. There are things that could be improved, in my opinion. The RFS transmitter user interface could be improved. Same with the Broncolor app; good idea, not 100% reliable. It’d be great if there was an AC option for powering the Siros L. I’m also looking for a better solution than a c-stand to hold the lights. I need the articulating feature of the c-stand arm but the small footprint of the base make it tricky to set the stand on uneven surfaces when on location. A stand with a wide base, articulating arms and less weight than the c-stand would be great. But overall, the new breed of monolights have really changed my workflow.

In the year and a half I’ve been using the Siros lights, I have been able to work much faster without giving up any quality in lighting. And my body is thankful for carrying less gear. And a project like “Ashes Fell Like Snow” really put into focus the advantages of using the new breed of monolights.

You can view all the photos and read all the interviews from this project by visiting the Ashes Fell Like Snow website.

About the author: Roman Cho is a photographer living in Los Angeles. The opinions expressed in this article are solely those of the author. His photos have appeared in publications such as Time Magazine, Rolling Stone, GQ, Food & Wine and Acoustic Guitar. When not photographing, you can find Roman cycling, rock climbing, or thinking about the next noodle dish. He does not have any dogs, cats or plants. If you listen to his mother, it’s a miracle he’s kept himself alive after all these years. You can find more of his work on his website.