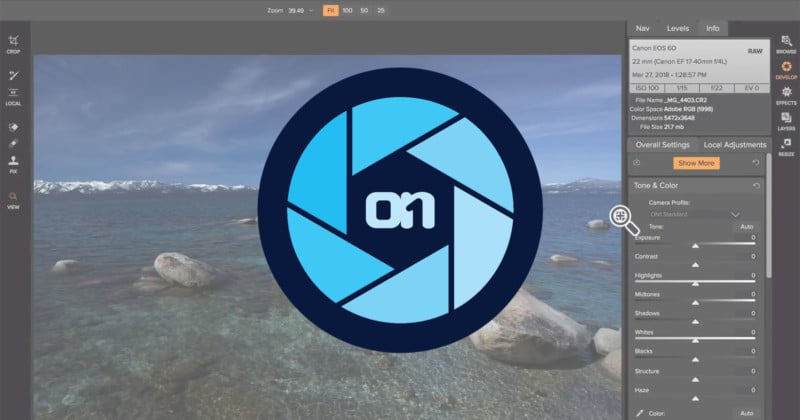 ON1 Photo RAW is about to get better. The company has announced an upcoming 2018.5 update that’ll bring a “massive” performance boost as well as several new major features to the RAW processor.

In addition to an overall performance boost that should make the program more responsive as a whole, there are special optimizations for individual tools as well. Brushing with the Masking Brush will be more fluid and responsive, particularly when using a Windows computer and a high-end screen. The Filmstrip has also been optimized to be just as fast in Develop and Effects as it is in Browse, allowing you to switch between photos instantaneously.

Photo RAW 2018.5 brings LUTs, or Look-Up Tables, allowing photographers to add matte, vintage, and cinematic color grading looks to photographs. There will be a number of LUTs available, including special packs by photographers/retouchers Matt Kloskowski, Tamara Lackey, and Hudson Henry.

Camera Profiles in 2018.5 will let you select the same looks you see on the back of your camera.

“Select from Natural, Portrait, Landscape, etc. depending on what your camera offers,” ON1 says. “These are not presets, they don’t adjust any of the sliders, and are non-destructive.”

Other features and improvements in 2018.5 include:

Transform Improvements “The Transform pane in Develop will include new tools to correct perspective and rotation issues. A new grid will make it easier to visualize results.”

Nested Presets: “Ability to better organize presets into a nested category structure will be added along with the ability to move, rename, delete, and nest presets and categories.”

Nested Albums: “Nest albums or photos inside of other albums. If you are migrating from Lightroom, your nested albums are brought over by the Lightroom migration assistant.”

Background Export: “Exporting will be processed in the background so customers can continue to work on another job without having to wait for the export to finish.”

New Cameras & Lenses: “Each update includes new cameras and lenses. The list is continuously updated, and we will share the final details when version 2018.5 is released.”

ON1 Photo RAW 2018.5 will be available in June 2018. The full version of the software will cost $100 for a limited time (regular price $120), but existing customers will receive it as a free update.

10 Tips to Up Your Street Photography Game