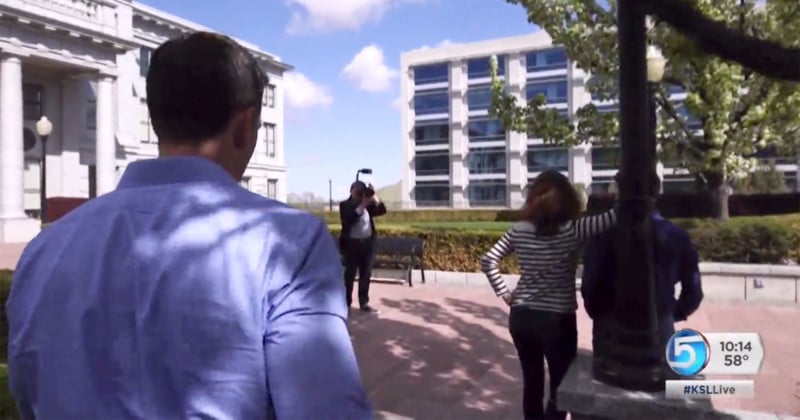 Investigative reporters often find it difficult or impossible to reach wedding photographers at the center of complaints and controversies. A local TV station recently came up with a clever way of setting up a face-to-face confrontation: it booked and paid for a photo shoot.

Salt Lake City-based NBC affiliate KSL TV just aired an investigation into wedding photographer David Bowe Jacobs of Bellissima Images Photography, who’s accused by a couple of being a “no show” at their wedding.

In order to interview Jacobs on camera, KSL stealthily hired the photographer for an engagement session. And while Jacobs was photographing the “couple,” reporter Mike Headrick interrupted the shoot with a news cameraman to ask some questions.

Here’s the full 7-minute news segment that aired (the ambush interview starts at 1:44):

KSL reports that on at least two occasions, Jacobs has contacted another photographer at the last minute to ask if they can shoot a wedding for him because he was purportedly getting surgery. The replacement photographer then shoots the weddings in Jacobs’ place and delivers the files to Jacobs to edit.

After 9 months of not receiving any wedding photos from Jacobs, the couple who sparked this investigation received a full refund and both their raw and edited wedding photos before this report aired on KSL TV.

The 10 Commandments of Portrait Photography

How to Take Underwater Photos