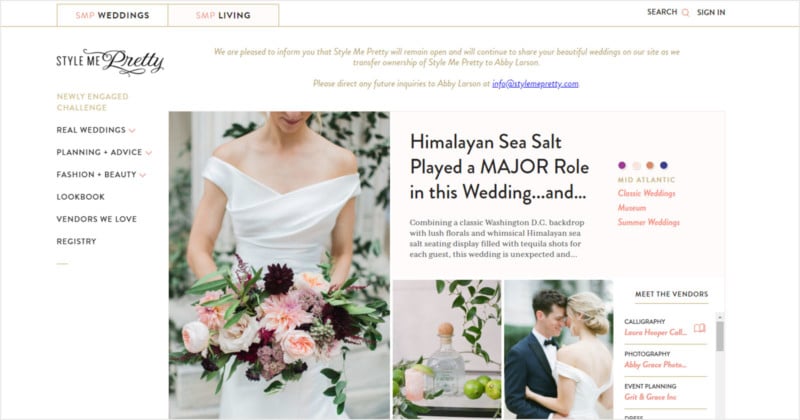 The popular blog Style Me Pretty announced earlier this month that it would be shutting down after inspiring wedding photographers for over a decade. That closure has now been averted after the site’s original founders worked out a deal to buy it back from Oath, the company Verizon folded Yahoo and AOL into.

Style Me Pretty was founded in 2007 by Abby Larson and served as a popular hub for wedding inspiration, including user-submitted wedding photos. It grew to reach a peak of 18 million pageviews per month and over 1 million followers on Instagram. It was acquired by AOL, which in turn was acquired by Verizon and placed under the Oath umbrella.

Earlier this month, the wedding photography industry was stunned when the blog abruptly announced that it would be shutting down at the end of April 2018 as Oath worked to sell off a number of Yahoo and AOL properties, including Flickr. Here’s what the since-deleted message said:

Even the most perfect of weddings must eventually come to a close. The same is true for us here at Style Me Pretty. After an incredible twelve years of sharing your beautiful weddings, we will close Style Me Pretty on April 30th.While we won’t be posting any new stories after today, you’ll be able to view and save anything on the site up until the end of the month.We’re so proud to have played even a small role in sending so many brides and grooms off into their happily-ever-after. Thank you for sharing such special moments with us.

Rangefinder Magazine reports that upon hearing the news, wedding photographer Kay English decided to set up a Change.org petition in an effort to save the site. That petition has since attracted over 4,000 signatures. On April 25th, Larson announced that she and her husband had reached a deal to buy back Style Me Pretty’s assets from Oath, allowing it to live on.

We are unbelievably thrilled to share with you guys the news that the original founders – myself, @abbydlarson, and my husband, @taitlarson – have acquired Style Me Pretty’s assets so that the brand can live on and thrive and become even better than ever. To say that we will be in your debt as readers and vendors and tastemakers, is perhaps the biggest understatement I have ever made. For those of you who have stood beside us and helped the world understand that Style Me Pretty’s purpose and function go far beyond pretty pictures – we are deeply, deeply grateful. Tait and I are SO excited to reboot this incredible company and build on the work that the team at SMP has already created – a space that showcases the most beautiful content in the world, alongside the most talented vendors who work so hard to make it happen.

Exciting news! Style Me Pretty will remain open and continue to
share your beautiful wedding stories as we transfer ownership of SMP to its founder, Abby Larson. Thanks to all for your unending support! Photo: @kayenglish pic.twitter.com/DBEal85r8z

Terms of the deal between Oath and the Larsons were not disclosed.

Dry Glass Plate Photography is Back