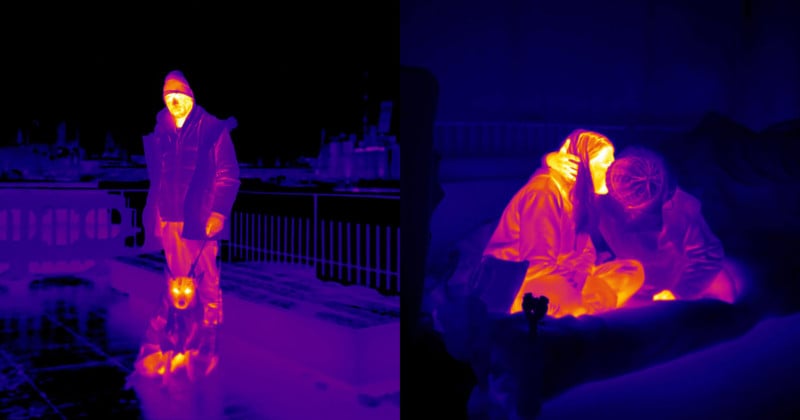 With homelessness on the rise in countries across Europe, photographer Grey Hutton decided to take to the streets of London and Berlin to shoot portraits of the homeless in winter months using a thermal camera. His project is titled Traces of Warmth.

“I wanted to get closer to these marginalized members of our society and, through their stories and my pictures, offer a new perspective on the realities of living on the streets in the unforgiving environments of Europe’s two largest economies,” says Hutton, who calls both London and Berlin home.

“Using a state-of-the-art infrared camera that records human body temperature, I set out to create intimate and vivid images of those I met in their surroundings, illuminating the extremity of their living conditions in a way that the human eye cannot see.”

“Through their stories, and the striking infrared color palette, I hope to highlight some of the difficulties of sleeping on the streets, and the importance of greater funding for councils to face the growing numbers of rough sleepers, and provide adequate support and housing for those in need,” Hutton says.

“It is my hope that by adding a new perspective to this growing problem, these images will act as a vivid reminder to some of our cities greatest failings, and perhaps encourage us to show a little more warmth to those members of our communities that are all-too-often overlooked,” Hutton says.

All the photos in Traces of Warmth were shot using a Flir T1030sc HD infrared camera that was loaned to Hutton for the purpose of this project, “the first of its kind to be attempted with this camera,” Hutton says.

Hutton shot the street photos between December 2017 through February 2018, and the coldest temperature he experienced while out was -17°C (1.4°F) in Berlin.

Image credits: Photographs by Grey Hutton and used with permission

This is the Surface of a Comet