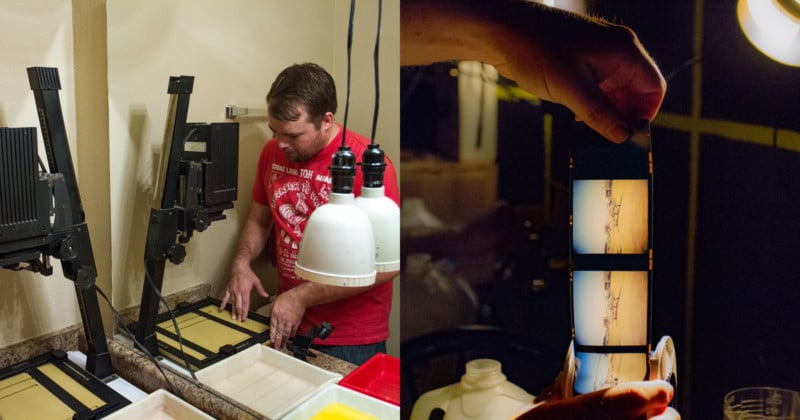 “Ah, s**t!” Andrew Rogers shouts as he spills developer all over the table and onto his vintage yellow Kodachrome film shirt. Hidden in the back corner of the semi-popular “video game” bar, The Grid in Mesa, Arizona, he and three fellow film fanatics mix chemicals and develop E6 color positive film. The bar, named after the computer world in the cult-classic Disney movie, Tron, hosts a plethora of video games, board games, and of course, alcohol.

Rogers continues to mix the chemicals, shifting and swirling the cylindrical container — with his film inside — from hand to hand, this time with a bit more care as not to spill anything. The chemicals slowly processing the exposed film into a visible image, making it permanent and removing its sensitivity to light.

“I actually know what I’m doing most of the time,” Rogers says jokingly as he dries off the table and his shirt. “I believe you!” says Andrew Fink, one of the film fanatics and a bartender at The Grid. His blue hair lights up under the glare of the lamp on the developing table in the dim back corner of the bar.

Since many professional labs in Arizona stopped offering E6 color positive film developing services, people like Rogers, Fink and their Phoenix Film Revival group are forced to ship their film out-of-state or develop it themselves. Color positive film – as opposed to color negative – is more sensitive by nature and requires different chemicals and a slightly altered developing process.

A few of the members of the Phoenix Film Revival meet up once a month to develop film. Others ship their film to established labs to develop the film for them, but that can be costly. Still, a lot of film shooters will develop in their bathrooms or better yet communal dark rooms, which is what the Phoenix Film Revival is trying to start — a darkroom that also offers classes in darkroom procedures. All of this to keep an old art form – film photography – alive in spite of the digital juggernaut. 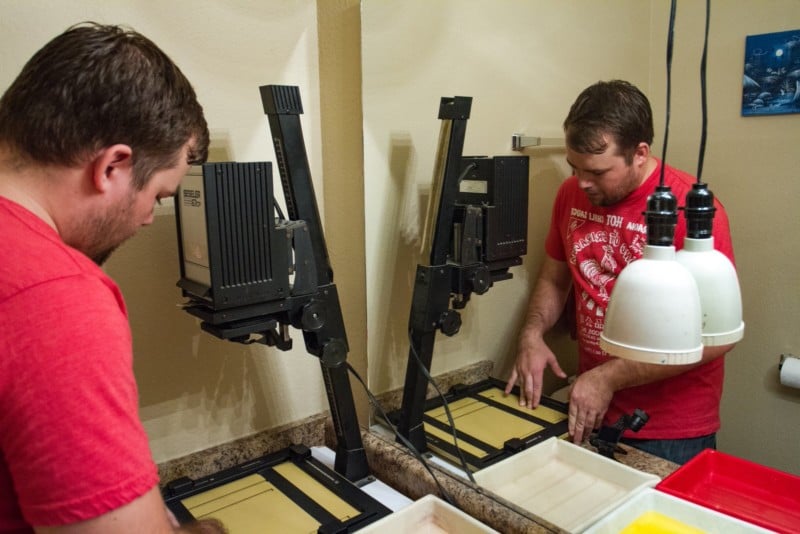 “I’m not against technology,” says Daniel Iannaccone, the founder of the group. “I personally would like to preserve these things so we don’t lose them.”

Iannaccone says that the reality of film photography is that the industry is no longer as popular as digital and because of that there has been difficulty for those shooting in the medium.

Although film is a big part of his life, Iannaccone does not shy away from digital or dislike it.

“What’s awesome right now is that we live in an era where we have both digital photography and analog,” Iannaccone says. “What’s cool is that we have the ability to do higher resolution scanning, we have better technology to improve on existing technology.”

Just a few feet to the side of the developing table, a couch placed in front of a large TV is hosting a group of rowdy young women. Virtual reality goggles are strapped to one of them, while the rest laugh and scream as zombies come out of the shadows of the game they’re playing. “Shoot! Shoot! Shoot!” one of the young women screams at the sight of the undead approaching.

At the developing table, Rogers finishes his rolls after spilling a few more times and hands the tank to Fink, who quickly scurries behind the bar into a back room to give the film a bath to wash off the chemicals.

Iannaccone then prepares his rolls and begins developing his film. 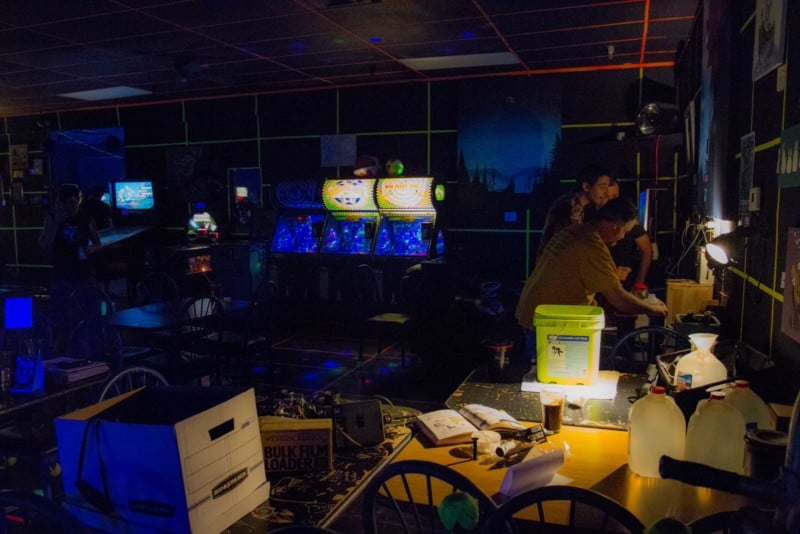 From the time that the first photographic process was conceived and put into practice, the average man was able to learn the trade without years of formal training. However, many painters of the era were judgmental of photography for the lack of “skill” needed in composing a canvas.

Throughout much of the 19th and the 20th century, photography brought the world to the individual instead of the other way around. Wars were photographed and covered by reporters, allowing the horrors to be seen and understood for the first time from thousands of miles away from harm’s way. Loved ones memorialized on their deathbeds with a funeral photo. The world became just a bit smaller for those willing to buy a copy of a photographic magazine or journal. With the advancement of technology, the same resentment from the transition of painting to photography persisted with the change from film to digital in the late 1990s. But after a decade of consumer and professional use, digital became king. Products such as 35mm and 120 film faded in popularity while digital became the industry standard for professionals and was praised for its ease with consumers.

This change in medium created a whole new generation of photographers who pushed the limits of a centuries-old art and profession. Photographers were no longer limited to 36 photos to a roll, nor did they have to wait to develop a photo. They appeared instantly on the back of the camera for review.

Well before the majority of the consumer market and the professional began transitioning to digital, companies like Kodak feared the devastating effects digital could have. Kodak, which filed for bankruptcy in 2012, was actually the first company to invent the digital camera. The company feared that if they were to release their invention into the marketplace it would disrupt their sales in film, which in the end it did.

The early 2000s gave way to digital cameras that far surpassed their analog counterparts in quality and capacity. This paved the way for the great migration from film to digital for professionals and hobbyists alike. With many making the switch, some held to their guns and hunkered down with their analog cameras.

“There’s the whole aspect of having something physical,” says Jose Romero, a member of the group and administrator of AZ Film Photography Club. “At the end of the day it’s not just ones and zeroes on your computer, you have something physical that you can just look at and hold it. That’s the really cool part.” 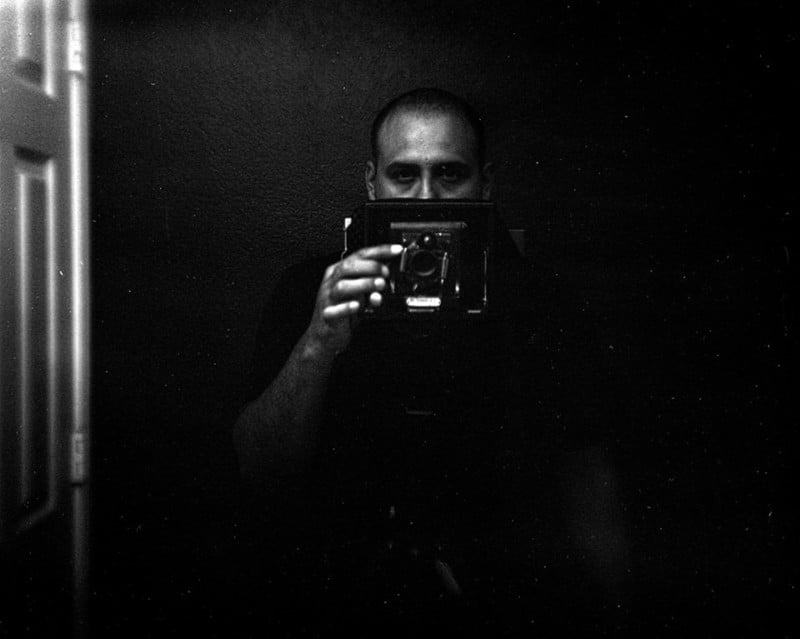 The Internet gave way to photo sharing across platforms, such as Facebook, Instagram, Twitter, Flickr and more. The “retro” look quickly became desirable and was replicated with digital filters. While some were content to use filters, many looked back to the original “look” that film could produce.

“I think it’s really a nostalgia thing, for me every time I visit my mother I always go through a closet, she’s got shoe boxes of film negatives,” Romero says. “A lot of people will say yes or no but Instagram really kind of brought back that nostalgic feel.”

Some never left film, while some returned and others picked up a 35mm camera for the first-time decades after the first digital camera was manufactured. Either way, film began to make a comeback – slowly, but with enthusiasm.

“I kind of like the restrictions. It’s challenging. At some point, digital doesn’t challenge you,” Romero says. “Film slows you down and makes you think about the shot. It’s become a cliché thing to say about film photography but it’s true.”

To Iannaccone’s right lies a box of vintage cameras. Polaroid cameras from the ’80s, SLR’s from the ’70s and ’90s, and others filled the box.

“I like to rescue cameras from Goodwill,” Rogers, says motioning at the box. “There’s a store right next to my house.” Rogers says they are up-for-grabs and that anyone is free to take one at no charge. “Your film should be done,” Fink says to Rogers as he disappears behind the bar and returns with the tank.

Rogers cracks open the container and the processed color positive film emerges. Photos of old airplanes were carefully framed two frames at a time with the goal of creating a 3D view using two frames when placed into a special set of glasses called a Stereoscope. Holding the wet film, Rogers walks over to a tall plastic collapsible bag used to dry the film and places the film inside. After a few minutes, it’s dry and ready to carefully be cut and placed into the Stereoscope for viewing.

Looking through the Stereoscope eyepiece, the two frames come to life in an analog display of 3D. “Wow look at those colors,” Rogers says, standing in the bathroom in the back of The Grid, holding the Stereoscope to his eyes admiring his handiwork then passing it around the group.

Iannaccone, finishing the developing process, begins holding his film up to the light. Images of trees pictured standing tall on the film are illuminated in front of the desk lamp.

“Four-by-five Ektachrome,” Iannaccone says. Iannaccone was given two 10 roll packs from Jose when Kodak discontinued making the film in March of 2012. “They are currently working to bring back Ektachrome and are going to release it next year,” he says about Kodak. “I shot this up in Flagstaff kind of impromptu just because I wanted to process and see if it would work.”

About the author: Nathan Fish is a photographer and journalist based in Phoenix, Arizona. You can find his work on his website and Instagram.

This Short Film Was Shot at 2520mm