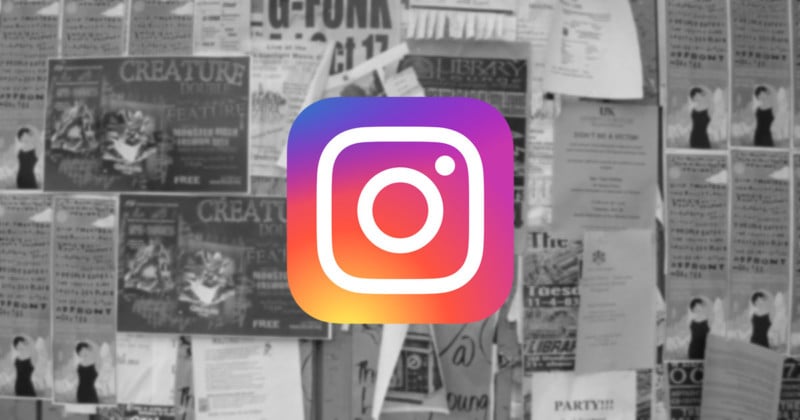 If you need help with your Instagram, there’s one cheat, trick, hack, whatever you want to call it, that’s free and more beneficial than anything else you can do.

How often do you engage with accounts you don’t follow? Do you stick to the photos in your feed? Or do you ever look at photos under hashtags? And how often are those hashtags something that aren’t for other photographers, but are for models, makeup artists, designers, and people like that? Not that often? Well, let me introduce you to The Flyer Theory (patent pending).

Picture this… You’re walking down the streets of New York. There are advertisements and flyers everywhere down every street. If you think of Instagram tags as streets in New York, they’re all filled with flyers. Well, think about every photo you post as one of those flyers. And think about all those people also walking down those same streets posting their flyers too and just ignoring what you posted for putting up their own.

That’s what it’s like when you post photos with hashtags. Your flyer is on all of these streets and sure, maybe it stands out among the rest of them, but chances are you’re not going to get any real, solid engagement out of it.

Now let’s say you change it up. Now you’re going to those streets and handing out flyers to people who are walking by. You’re not limited to what streets you can post on and you’re actually putting your flyers in people’s hands. This is what interacting with people on Instagram is like.

When you like photos on hashtags, you’re literally putting a notification on someone’s phone that says “Hey, my name is (your name here) and I like your photo”. Yes, most people don’t care and most people will ignore it. But not all of them. Some people will actually inspect your profile. And those people might want to follow you and hey, maybe they’ll even want to pay you for a shoot.

Gary Vaynerchuk has talked about this before:

You can’t just be in the background. You need to put in the work. Social media doesn’t work in your favor. It’s a give and take. The work you put in is somewhat equal to what you get out of it. If you’re ignoring other people and only look at people you admire, or friends, or meme pages, you’re not going to get real engagement with new, potential clients. Yes, of course there will be some people. But you’re leaving so much on the table by not doing that.

1. Your work needs to be half-decent for the flyer theory to work. People might check out your page, but they won’t like or follow because they don’t care about what you do. Just because you put a flyer in someone’s hand doesn’t mean they are going to care about it. This isn’t some fake follower trick, you’re basically introducing yourself to people who wouldn’t know about you otherwise.

2. You need to be smart about the tags you engage with to be effective. If you’re a makeup artist trying to work with photographers, why would you interact with pictures from other makeup artists? It’s definitely great to connect with other people in your area, but they’re not going to pay you. You go to places like #nycphotographer (or whatever your local city/state is) or #nycdesigner or tags like that. You try and get the attention of photographers. Not makeup artists, not dog lovers, and not bakers. Basically, you think about who your perfect client is and try to get their attention.

3. You can’t like everything. Instagram will ban you for liking too many things in an hour and there are just some things you don’t want to like. I go through places like #nycmodel pretty regularly and I make sure not to like photos of young kids, random photos of models with their significant other or people just out clubbing. I try to like photos of people actually modeling and pictures I actually like. I’m not lying, I’m not just trying to spam. I find people whose work I actually like. I even follow a lot of them. If you want to spam people’s photos you can. There are services for that out there. But have fun being that person who follows/unfollows everyone. No one likes that person.

4. Diversify your bonds. You can’t just keep liking the same photos from the same people on the same tags. You have to mix it up every now and then. If you’re looking at #NYCModel every time, maybe look at #modelagency or something else that deals with models. If you consistently like things under the same tags, you’re going to at some point “dry up the well” so to speak and you’ll just be liking the same photos from the same people who don’t want to follow or like your stuff.

And that’s it. It can be shrunk down to just engage with people who are in your target demographic. And that’s seriously it. By engaging with people and putting yourself out there first, you’re inviting others to check out what you do who wouldn’t have otherwise. So go like and comment on sh*t and engage with people while being genuine. Because people want that and they appreciate it when you actually try and give a d*mn about them.

About the author: David Justice is a photographer who shoots beauty and fashion. The opinions expressed in this article are solely those of the author. You can find more of his work on his website, blog, and Instagram. This article was also published here.