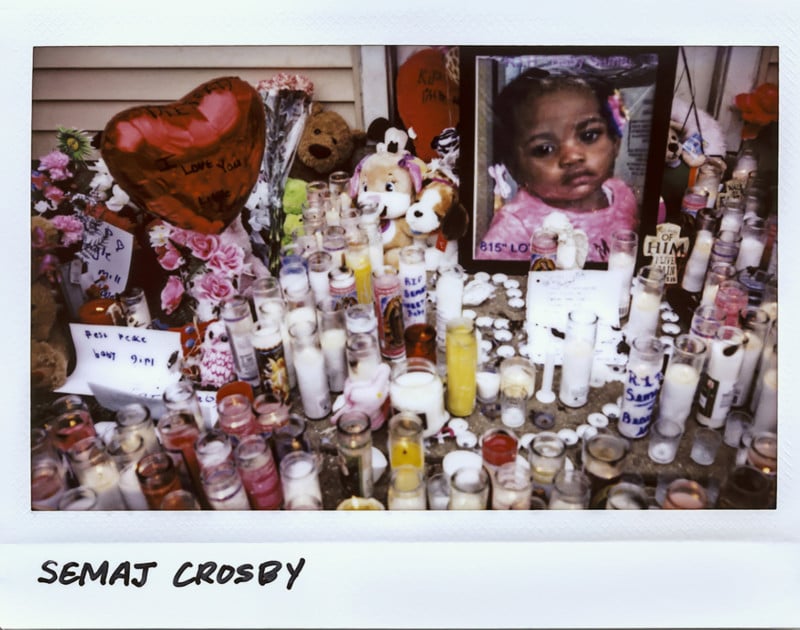 In 2016, there were 762 murders in Chicago, the most by far anywhere in the United States — more than the total of New York and Los Angeles combined. This year there have already been over 600 homicides. I was born and raised in Canada, where there are fewer murders in the entire country than Chicago has in one year.

They are not the nameless; they are not a number… They are the victims of violence, and all were killed in Chicagoland.

I started documenting their stories in Chicago over 6 months ago. It began because I felt the stories of the victims were too often being referred to as a statistic rather than a person, so I started visiting the places where they were killed. I wanted to know more about what happened to them, to somehow feel connected. Most of the time, there was a sense that it never even happened, even though a life had been taken there. I wanted to take a photograph in a compassionate way that would become a tangible memory from such tragic stories, connecting the victims as a person and not as a statistic.

In the beginning of the project I was photographing the places on a digital camera, but I felt that there was something missing. While visiting the vigil for Semaj Crosby in April, I had my Fujifilm Instax Wide instant film camera with me in my bag and decided to take a photograph. A mourner at the site came over to see what was I was doing, so I gave her a photograph right from the camera. She held it in her hands and I watched her as the image slowly appeared. To be able to hand someone these photographs was an incredibly rewarding feeling to me, even if it was under such tragic circumstances. I knew from that moment, that I wanted the pictures to be on analog film.

This became an important part of the story to me, being able to share the photographs with friends and family at several of the vigils. Watching their reactions to the photographs developing in their hands, like a new memory being created, was very special. Their names were handwritten directly on to the borders of the photograph because I wanted people to immediately see that behind each image was a real person and they had a name.

Taking that instant photograph felt like capturing a final memory of their lives to be remembered. The images were all unique, just like the victims. One moment, one person, one image.

I think the hardest part at the end was reflecting on all their stories. I was no longer seeing the photographs but the individual people behind all the images. So many tragic stories. Jazebel, John John, Cynthia, Miriam, and Corbin. Standing in the spots where many took their last breaths.

Though most of the vigils are long gone, their pictures will remain and I hope their memories will too.

All these photographs were taken in 2017.

About the author: Jim Young is an award-winning photojournalist based in Chicago. Born in Canada, he has been covering international and domestic news, politics, features, and sports for the last 20 years for Reuters News Agency. Jim started his career covering the Canadian Prime Minister, politics, and news in Ottawa. In 2004, he spent months covering John Kerry, traveling throughout the United States on his first of four U.S. Presidential election campaigns. After moving to Washington D.C. a year later, he covered Presidents George W. Bush and Barack Obama while assigned to cover the White House and political news. Since moving to Chicago in 2011, his work has focused on covering major and breaking news, sports, and in-depth stories on daily life. He has traveled extensively through the United States and Canada and to over 60 countries worldwide to cover four Olympic Games, World Series, Super Bowl, Stanley Cup, The Masters, world leader summits and political elections. You can find more of his work on his website, Instagram, and Twitter.

BTS: Shooting the Cast of Frozen for Vanity Fair