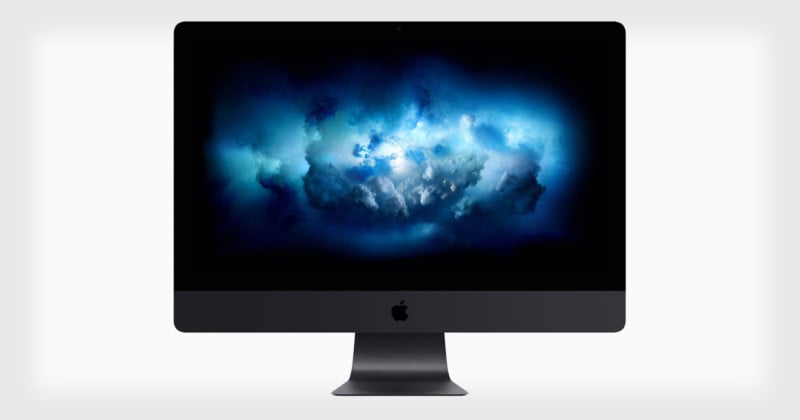 Apple’s new $4,999+ iMac Pro just hit stores today after being announced back in June. Based on initial hands-on reviews that are starting to appear, this computer looks like a solid option for photographers looking for a monster computer upgrade.

While the MacBook Pro and Mac Pro start at $1,299 and $2,999, respectively, the iMac Pro has a staggering starting price tag of $4,999. Include all the available spec and performance upgrades offered by Apple, and you’re looking at a computer that costs over $13,000.

“Pros love iMac. So we created one just for you,” Apple says. “It’s packed with the most powerful graphics and processors ever in a Mac, along with the most advanced storage, memory, and I/O — all behind a breathtaking Retina 5K display in a sleek, all-in-one design.

“For everyone from photographers to video editors to 3D animators to musicians to software developers to scientists, iMac Pro is ready to turn your biggest ideas into your greatest work.” 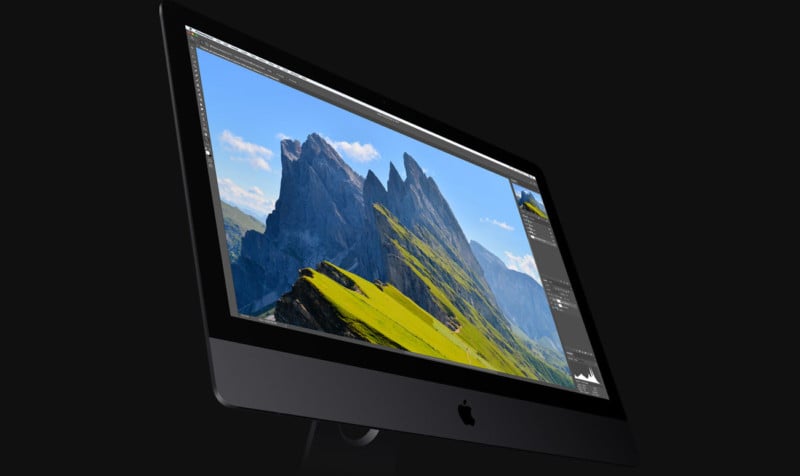 The top-of-the-line features and specs you’ll find in the iMac Pro include up to 18 cores (with options for 8/10/14/18), Turbo Boost speeds up to 4.5GHz, a cache of up to 42MB, Radeon Pro Vega graphics with up to 16GB of memory and 22 teraflops, up to 128GB of memory across 4 channels, up to 4TB of all-flash storage, four 40Gb/s Thunderbolt 3 ports that let you connect two 5K monitors, 10Gb Ethernet, and a Retina 5K 27-inch display with 14.7 million pixels and one billion colors.

The dedicated webpage on the Apple site boasts of the iMac Pro’s performance in handling photo editing software such as Photoshop CC and Pixelmator Pro.

Reviewers and notable creatives who have gotten their hands on the iMac Pro early have great things to say about it. Here’s a roundup:

Pulitzer Prize–winning photographer Vincent Laforet calls it “a wonderful machine that will satisfy all users out there.”

Overall this is a wonderful machine that will satisfy all users out there – with the exception of the 0.1% of users who work in the 8K RAW RED world for example and want to transcode at 1:1 or faster with purpose-built machines. If you’re shooting 4K or pretty much any still camera available today, this Mac is unlikely to let you down. I know it’s tackled everything I’ve thrown at it and it’s the first machine that can keep up with me in an still edit of thousands of images or hundreds of minutes of video footage.

“It feels like the ideal high-end YouTuber, Final Cut Pro machine,” says technology personality Marques Brownlee. “The main question will be, is it worth the extra money.”

“Given the up-to-date high-level components, it’s not surprising that it’s probably faster than any Mac to date,” says CNET’s Lori Grunin, “but I really feel that unless you’ve got a pent-up need for an iMac on steroids, I’d wait and see what the new Mac Pro looks like.”

Jonathan Morrison provides a tour showing what the iMac Pro offers, both inside and out:

Software developer Craig A. Hunter of Hunter Research and Technology has published a technical review of the computer.

[O]ne of the main advantages of the iMac Pro: moving to a workstation class CPU gives access to more cores, advanced processing features, and a bigger, more scalable, performance envelope than you can get in a standard iMac. Other key advantages are memory capacity and graphics capability. If your work benefits from any of these things, then the iMac Pro is the natural choice […]

It will be interesting to see how the higher end models price out, especially the 18-core model, but if the trend is in line with the base model, this will be quite a deal for people that are ready to spend money on a true workstation-class Mac. Just be careful that your wallet doesn’t catch on fire.

You can order the iMac Pro on Apple’s website and through retailers such as B&H.

5 Rules for Better Bird Photos, or: It’s All About the Eyes

How to Selectively Sharpen Photos with Photoshop’s High Pass Filter