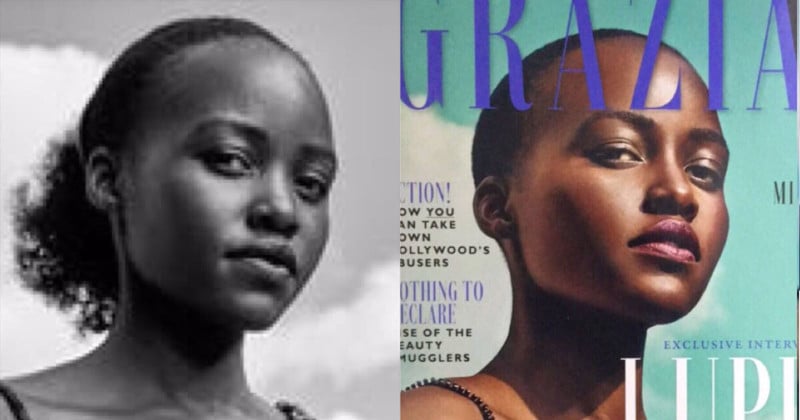 A photographer is publicly apologizing this week after actress Lupita Nyong’o took to social media to complain that her hair had been edited out of a cover photo on the women’s magazine Grazia.

Nyong’o is a Kenyan-Mexican actress who won an Oscar for her role in the film 12 Years a Slave.

The controversy started when Nyong’o saw her cover photo on Grazia and noticed that a large portion of her hair had been edited out and smoothed to make it appear that she had short hair.

She then posted messages to her social media accounts complaining about the editing. On Twitter, she accused the magazine of manipulating the photo to “fit a more Eurocentric notion of what beautiful hair looks like.”

Disappointed that @GraziaUK edited out & smoothed my hair to fit a more Eurocentric notion of what beautiful hair looks like. #dtmh pic.twitter.com/10UUScS7Xo

Nyong’o wrote a longer message on Instagram, saying that she would not have consented to the cover photo had she been consulted about the change.

“Being featured on the cover of a magazine fulfills me as it is an opportunity to show other dark, kinky-haired people, and particularly our children, that they are beautiful just the way they are,” Nyong’o writes, saying that she grew up thinking that “light skin and straight, silky hair were the standards of beauty.”

“[…] there is still a very long way to go to combat the unconscious prejudice against black women’s complexion, hair style and texture.”

As I have made clear so often in the past with every fiber of my being, I embrace my natural heritage and despite having grown up thinking light skin and straight, silky hair were the standards of beauty, I now know that my dark skin and kinky, coily hair are beautiful too. Being featured on the cover of a magazine fulfills me as it is an opportunity to show other dark, kinky-haired people, and particularly our children, that they are beautiful just the way they are. I am disappointed that @graziauk invited me to be on their cover and then edited out and smoothed my hair to fit their notion of what beautiful hair looks like. Had I been consulted, I would have explained that I cannot support or condone the omission of what is my native heritage with the intention that they appreciate that there is still a very long way to go to combat the unconscious prejudice against black women's complexion, hair style and texture. #dtmh

The Guardian reports that Grazia UK quickly issued a statement apologizing “unreservedly” for the cover photo, but also saying that it was actually the photographer who was responsible for delivering the altered portrait.

Grazia is committed to representing diversity throughout its pages and apologises unreservedly to Lupita Nyong’o.

“Grazia magazine would like to make it clear that at no point did they make any editorial request to the photographer for Lupita Nyong’o’s hair to be altered on this week’s cover, nor did we alter it ourselves. But we apologise unreservedly for not upholding the highest of editorial standards in ensuring that that we were aware of all alterations that had been made.

Soon after, photographer An Le issued a statement apologizing for the “unbelievably damaging and hurtful act” of erasing Nyong’o’s hair. Here’s his full apology:

I’ve had some time to reflect on my part in the incident involving Grazia and Ms Nyong’o. I realise now what an incredibly monumental mistake I have made and I would like to take this time to apologise to Ms Nyong’o and everyone else that I did offend.

Though it was not my intention to hurt anyone, I can see now that altering the image of her hair was an unbelievably damaging and hurtful act.

As an immigrant myself, it is my duty to be an advocate for the representation of diversity of beauty in this industry. I will demonstrate this in my work even more going forward.

My altering of her image was not born out of any hate but instead out of my own ignorance and insensitivity to the constant slighting of women of color throughout the different media platforms.

There is no excuse for my actions. I deeply regret the pain I’ve caused Ms Nyong’o, a woman I’ve admired for quite some time now. Again, I would like to say I’m deeply sorry to everyone I did offend. I want to thank Lupita for addressing this important issue.