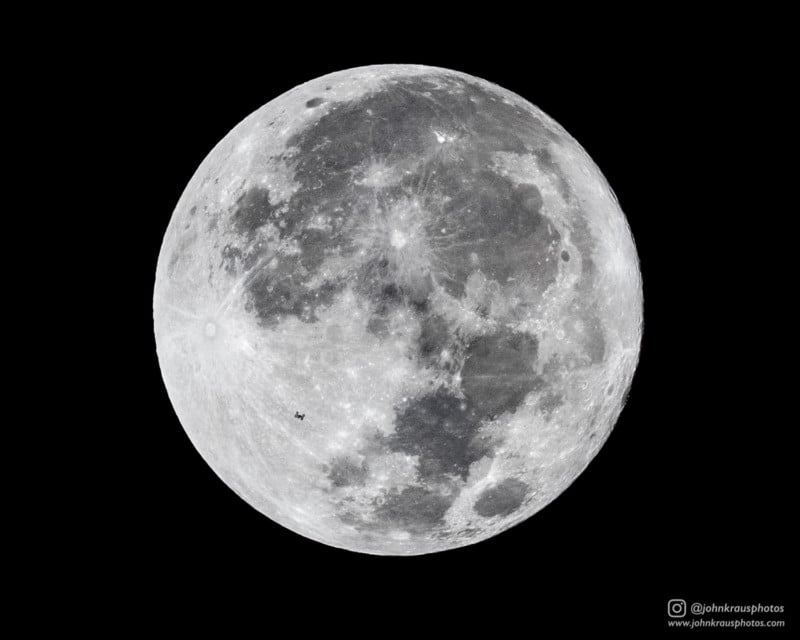 This image was taken on November 4th, 2017 at 4:19 am in Titusville, Florida. It shows the International Space Station (with a crew of six currently onboard) transiting the full “Beaver Moon.” As the ISS orbits Earth at 17,500mph, or roughly five miles per second, the transit lasted just 0.90 seconds.


This transit was visible from a narrow path stretching from the middle of Florida to the east coast. I was stationed in a very specific location, as being just several tenths of a mile can throw off a planned transit photo.

Given that the transit occurred so quickly, and I was in such a specific location, it’s natural to ask how I calculated the information required to take this photo. Luckily, I didn’t have to, as there’s a website dedicated to finding out transit info. I had been eyeing this transit for several weeks, and the forecast showed that we’d have clear skies up in Titusville.

I used a higher ISO and a quicker shutter speed to freeze the ISS, as again, it’s traveling very quickly. I didn’t want any motion blur.

The camera and lens were mounted on an equatorial mount (which in turn was on top of a tripod). Equatorial mounts are dedicated astrophotography tools designed to rotate your camera against Earth’s rotation to allow for long exposures of deep night sky objects. My SkyWatcher Star Adventurer mount also has an option to track the moon. Anyone who has photographed the moon with a telephoto lens using a tripod knows that the moon will shift quite quickly in the frame. The equatorial mount cancels this movement out.

I used the website time.is as a precise clock to time the transit in correlation with transit-finder.com’s info. There was some confusion among our group on whether the transit was occurring at 20 seconds past the minute or 24. I did a last-minute check and transit-finder.com showed 24 seconds past 4:19 am. I rapidly fired images at both times to ensure I’d captured something. I managed to get five frames of the transit before my camera’s buffer filled up.

Editor’s note: We’ve previously feature Kraus’ work in photographing a rocket launch from 45 yards away and in “writing” your signature with a long exposure photo of the Moon.

About the author: John Kraus is a 17-year-old photographer based in Florida. He shoots a wide variety of subjects including rocket launches, landscapes, aerial photography, astrophotography, aviation, and much more around Florida. You can find more of his work on his website and Instagram.