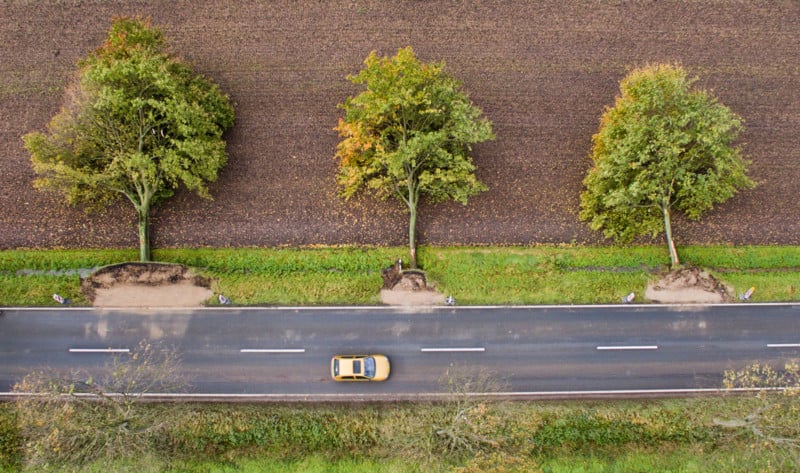 Earlier this month, a storm named Xavier pounded Europe and caused extensive damage. A day after the storm, photographer Julian Stratenschulte took his camera drone out and captured this beautiful and slightly disorienting photo showing a row of trees that were knocked down, from a bird’s-eye view.

Stratenschulte, a staff photographer with German Press Agency dpa since 2009 and a drone operator since 2015, set out early that morning before sunrise to capture photos of the damage across Germany — trees had been uprooted across the northern part of the country.

“I drove around by car to find a good spot showing several trees next to each other,” Stratenschulte tells PetaPixel. “On a country lane I found three uprooted trees right next to the street. I thought to myself, ‘Well, maybe this would look interesting from a bird’s-eye view.'”

So Stratenschulte pulled out his DJI Phantom and captured a series of shots. He then edited the photos at the scene and sent them to his picture desk in Berlin. A short time later, the photo above began going viral on the Internet and Stratenschulte’s smartphone began buzzing nonstop with notifications about emails, social media messages, and calls.

“So many people from all over the world were excited by the photo,” Stratenschulte says. “I was really surprised and didn’t expect that would happen. For me, the shot wasn’t anything more than a normal weather feature photo because I’ve known the scene and the optical illusion of the picture did not work for me.”

After the photo was featured on TV and in newspapers around the world, it came to light that not all of the trees in this country lane had been knocked over by the storm. Some of them had become seriously damaged, and a local farmer had used heavy machinery to bring the trees down, which is why the trees happened to be lying at perfect right angles to the street.