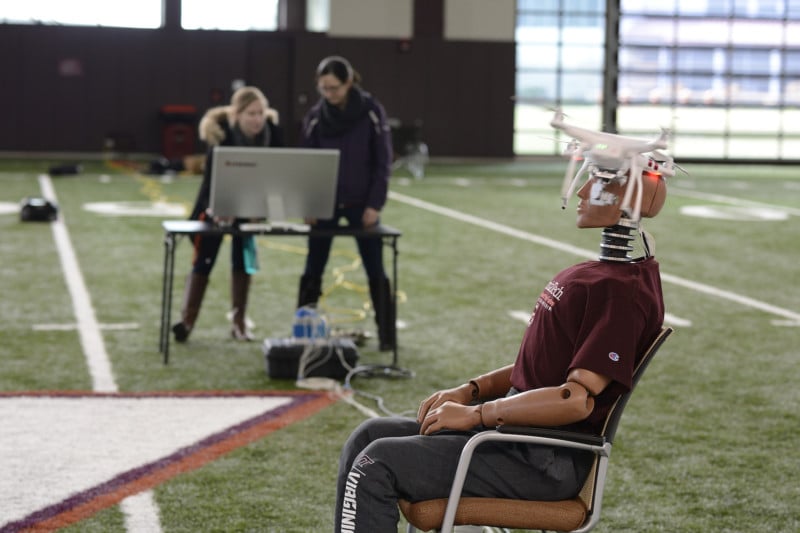 Researchers at Virginia Tech have been studying the injury risks posed by consumer drones by flying them into dummies’ faces, and they’ve now come to a conclusion. The study found that the risk of a catastrophic head injury was less than 5 percent in an impact with a drone weighing 2.6 lbs (such as the popular DJI Phantom).

Bloomberg reports that the study, which was published in Annals of Biomedical Engineering, involved crashing a number of differently sized drones into crash test dummies, using sensors to measure the impact and calculate the risks posed in a real-life incident.

Drones are currently restricted from flying over crowds except for in specific circumstances, but this research may give the FAA something to consider with regards to relaxing the rules.

This footage, from when the news of the study taking place was released, provides an insight into how the experiment worked:

“Risk of injury was observed to increase with increasing UAS mass, and the larger models tested are not safe for operations over people in their current form,” said the research team.

The researchers, led by biomechanics professor Steven Rowson, also found that the risk of a head injury is greater from a drone falling directly onto a person, rather than it flying into them on a more horizontal plane. The authors made a suggestion that the FAA should consider updating its guidelines to restrict just heavier drones from flying over people, potentially opening up opportunities for smaller consumer drones to perform such flights.

However, the study only looked at head trauma and didn’t account for the potential damage caused by other risks, such as the rotor blades cutting the skin or eyes.

The Virginia Tech team looked at three models of drones, the smallest of which was the DJI Phantom 3. The risks were found to be “minimal” with the Phantom, but a DJI S1000+ model (an 8-rotor drone weighing 24 pounds) had an injury risk of around 70% in some tests.

There is no public response yet from the FAA, but it will be interesting to see if this study influences lawmakers at all with regards to drone use in populated areas.