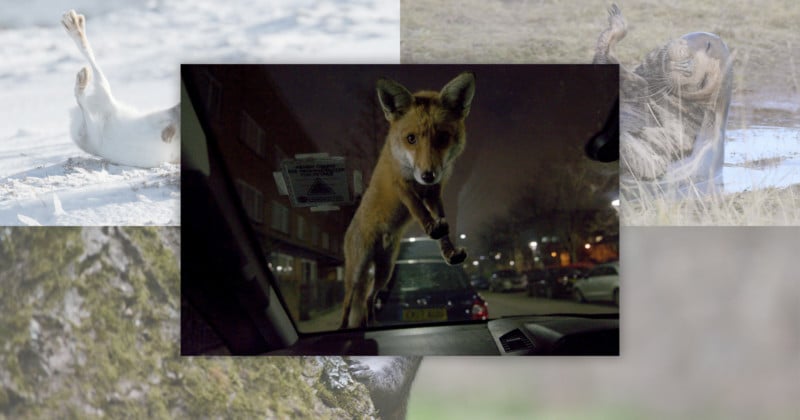 The Mammal Society has announced the winners of the (oddly-specific) Mammal Photographer of the Year competition, awarding the top prize to an amateur photographer from East London who captured a local fox staring him down through a car’s windscreen, looking for food.

The Mammal Society is a Uk-based charity that advocates for science-led mammal conservation, and part of its efforts include the annual “Mammal Photographer of the Year” competition, which began in 2018. It’s not the largest of contests, with only about 300 entries every year, but this year’s winners are receiving some well-deserved praise.

The overall winner and 2020 Mammal Photographer of the Year is amateur photographer Roger Cox, who claimed the the top prize with his photo of a local fox that he frequently runs into around his home in East London:

“This animal often foraged for the wild cherries that fell from the trees and landed in the wells between the bonnets and windscreens of parked cars,” explains Cox. “I took this picture… when it jumped up on my car to investigate if there was anything of interest for it, as I’d seen it do several times before.”

It’s not the most technically “perfect” image–given the challenge of shooting in low light, through a windshield—but the fox’s bold stare captivated the judges.

“Sometimes photographs like these get overlooked when we return home and look through them on the big screen and many never make it as far as competition entries,” said Head Judge Brett Lewis, “but Roger made a bold choice and the rewards are deserved.”

Scroll down to see the rest of the winners and runners up.

Runner Up for Mammal Photographer of the Year 2020 went to photographer Kate McRae, who captured the above photo of a mountain hare rolling around in the snow to clean itself.

“[The hare] ran across the deep snow in front of me, paused and, as I took a shot, it rolled!” says McRae. ‘They often use the snow in this way, to clean the coat and help keep it in tip-top condition; essential in these harsh conditions!”

The wining photo in the Elusive Mammal Category—new for this year—was captured by photographer Dan Lettice off the coast of West Cork, Ireland.

“I’ve seen common dolphins in pods of anywhere from a handful up to 100’s of animals,” says Lettice. “The joy of a leaping Common Dolphin is something to behold. They always find time to interact with the boat.”

The winner of this year’s Young Mammal Photographer of the Year in the 14-and-under category goes to Dylan Jenkins, who captured a perfectly framed shot of this squirrel peeking out from behind a tree.

“Dylan’s image sharply captures its subject and its character,” said contest Judge Zeb Soanes, “at once curious and anxious and that tension between both states makes it a captivating picture.”

Young Mammal Photographer of the Year in the 15 to 18 age bracket went to Alex White for his photo titled “Summer Meadow Deer.”

“The buck is aware and its focus of attention is diverted towards the presence of the photographer,” says this year’s Head Judge, praising the photo. “Often scenes like these are fleeting and it takes a certain amount of professionalism to capture the image so well.”

Finally, the last winner from this year’s contest was in the people’s choice category the “Mammal Comedian Award.” About 900 votes were cast, with 58% of respondents voting to give the comedian award to phtoographer Philip Ryan for his photo of a smiling grey seal.

This one pretty well speaks for itself.

Image credits: All images credited above, used courtesy of the Mammal Society.

How to Disinfect Your Camera Gear During the Coronavirus Pandemic