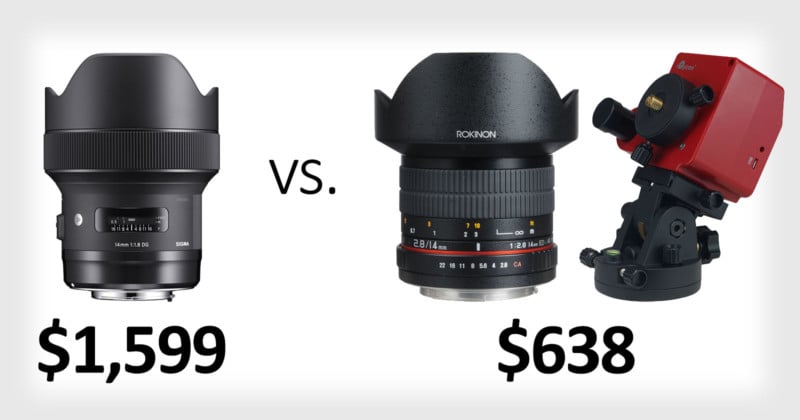 I’ve seen a lot of posts and comments raving about how f/1.8 on a 14mm lens is revolutionary for anyone wanting to shoot astrophotography. Yes, having a larger aperture will collect more light, but you’re still limited in the exposure length because of the Earth’s rotation.

To counteract that, you can get something called a tracker, which automatically rotates your camera to match the earth, and keeps your stars from trailing. The Sigma 14mm f/1.8 gives you a 1 1/3-stop advantage over the Rokinon 14mm f/2.8, which means you can get an exposure that is 2.5x brighter on the Sigma. However, if you get a tracker, you can compensate for the smaller aperture with a much longer exposure.

For example, the iOptron SkyTracker Pro will allow you to expose for 2 minutes or more with a 14mm lens attached with minimal trailing.

In my opinion, the biggest advantage of getting a tracker is versatility. You have the option of connecting some longer telephoto lenses to photograph smaller targets. Even if your lenses have slow apertures, the tracker will still gives you great results.

Some downsides to the Rokinon and tracker combo are as follows:

1. It’s manual focus only, which doesn’t matter for astrophotography, but might be annoying if you want to use the lens for something else.

2. If you have any landscape in the shot, you will need to do a composite in Photoshop because the landscape will be streaked from the tracking.

3. You will need to polar align the tracker to make it work properly. However, at 14mm, polar alignment doesn’t matter too much, and doesn’t need to be too accurate. Something roughly correct will do just fine.

4. You don’t get a fancy new Sigma Art lens.

So in summary, don’t waste your money getting the new Sigma 14mm f/1.8 if you want to shoot only astrophotography. Get a cheap manual focus lens and a tracker instead.

About the author: Richard Hum is an astrophotography enthusiast and a graduate student in electrical engineering. The opinions expressed in this article are solely those of the author. You can find some of Hum’s work on his Instagram.