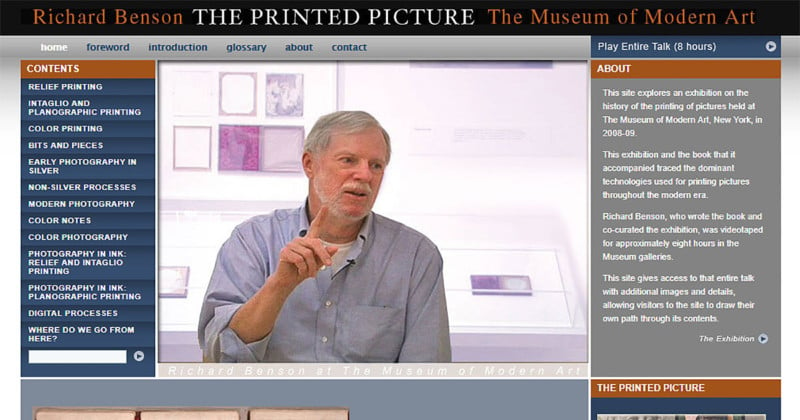 I think the first time I actually met Richard “Chip” Benson was at Wellesley College in the 80s. It was at an opening reception and Chip and Lee Friedlander were being honored as they had both just received MacArthur grants. I knew the Bensons were from Newport, RI and were friends of my sister and brother-in-law Marc Harrison, an industrial designer and chair of the ID Department at RISD.

From time to time I’d hear that Chip had done something extraordinary and knew he was printing his 8 x 10 negatives on aluminum with the result being these incredibly flat prints that seemed to go on forever. He was friends with John Szarkowski, the photo curator at MOMA and I remember seeing his work on display once at the museum. During those years Chip was heavily invested in making separations for photo books. An example is the four volumes on Eugene Atget produced for the Museum of Modern Art.

By the late 80s and early 90s digital was beginning to be the hot topic. Kodak built a research center for all things digital in Camden, Maine called the Center for Creative Imaging. I wrote grant applications to allow me to take classes and do research and found, of course, when I arrived, that Chip was already there. I was struggling to understand how to move a mouse around and what this thing called Photoshop was all about and Chip was scanning his 8 x 10’s with a drum scanner and writing back to 8 x 10 film in a special restricted “cold room”on the Center’s single large format LVT.

By 1992 or 1993, I had asked for and received “special status” at the Center, which gave me free reign over all the Center’s operations. I had also been given a show the next summer in the first floor gallery. That year I was up there every time I got a chance, hanging out in classes, now scanning and film writing my own 8 x 10 negatives and occasionally running into Chip, who was always doing something incomprehensible, reinventing photography.

In the early summer of 93 (I believe) I loaded up the car full of framed prints and drove up to Camden to install my show at the Center. We hung the show over a weekend. Chip came to the opening and invited me to a lecture he was giving the next day on the “History of Photography”. I decided to hang around.

I thought I knew something about the history of photography myself. After all, I was teaching it back at my university, along with a course in contemporary directions every other year.

But Chip changed all that, as his lecture, given without notes, to a mostly Camden summer tourist crowd, was a revelation. I came from the Beumont Newhall school of the history of well-off western white guys inventing the medium, with an occasional Dorothea Lang or Bernice Abbott thrown in the mix for good measure. Chip revealed that, amazing as it seems, photography was taking place in the mid 1880s in places like India, Asia, South American and Africa. Of course, much of it was brilliant. His perspective and the depth of his research and knowledge was mind blowing. I have never quite looked at my chosen discipline the same way since that day. It was clearly evident that I was in the presence of a genius as well.

I wanted more of Chip’s brilliance but by this time he was regarded as a real resource. Most years at Northeastern I taught a view camera course and inevitably we would head off in a school van for field trips. I would tend to head us toward Newport, RI where Chip lived. I would call up Chip a couple of days in advance and ask him if he could join us for lunch. Mostly, he would dodge me as he had some fierce deadline for something and didn’t want to be diverted but I convinced him a couple of times to meet with us.

I remember one day. We’d been out at Fort Adams in Newport in late March in spitting snow and rain trying to take pictures. After, we piled into a restaurant and Chip arrived. There were probably 8 of us. We sat at a big table in a mostly empty restaurant in the late afternoon. Me, these students who didn’t know who Walker Evans, Diane Arbus, or Alfred Steiglitz was, let alone Richard Benson, and Chip.

We settled in and Chip said, “well, Neal, what do you want me to talk about?” Oh my God, caught speechless. Then I thought, selfishly, this isn’t going to be such an import thing for the students because this is way far above where they are, but it could be for me. So I asked Chip to talk about what he was working on right now.

That’s all it took.

I got another blast of genius. All you needed to do with him was to prime the pump. Separations, masking, and some sort of hybridized system of film and digital capture, stochastic curves, tweaking dynamic range, some stuff about optics, and working with the limitations of present day technology, predictions of short range and longer term challenges and solutions, some chemistry, enough to fill my teeny tiny brain in five minutes and he went on for what must have been an hour.

I have no recollection of anything else, driving us back to school, what the students thought or even said to me the rest of that day.

The final story and the last time I saw Chip was in the late 90s. He was by then the dean of the Yale Graduate School of Design (1996-2006) and had invited Frederic Sommer to give a talk (for more on Fred search the blog for “Sommer”). I drove down to New Haven that afternoon for the presentation. When I got to the hall where Fred was to speak, I found a couple of my students had made the trip as well.

Chip introduced Fred, Fred gave his talk and then the two students and I went nearby for a beer and maybe a slice before driving back to Boston. Soon, in walked Fred Sommer and Chip Benson, with a few graduate students, there to do the same thing. They walked by me and didn’t take any notice. But there were two of the most brilliant people I’d ever known, hanging out, having a beer and pizza after a talk on a weeknight at Yale. Damn.

Thank you, Chip, for your huge contribution to photography.

Want to know more about Chip Benson? His work is represented by Pace MacGill Gallery and he created a website that explains much of his research.

About the author: Neal Rantoul is a career artist and educator. After 10 years teaching at Harvard and 30 years as head of the Photo Program at Northeastern University in Boston, he retired from teaching in 2012. You can find out more about him or see his photographic work by visiting his website. This article was also published here.

The Truth About ‘Shot on iPhone’-Style Ads

‘Polaroid’ is a New Horror Film About a Haunted Instant Camera