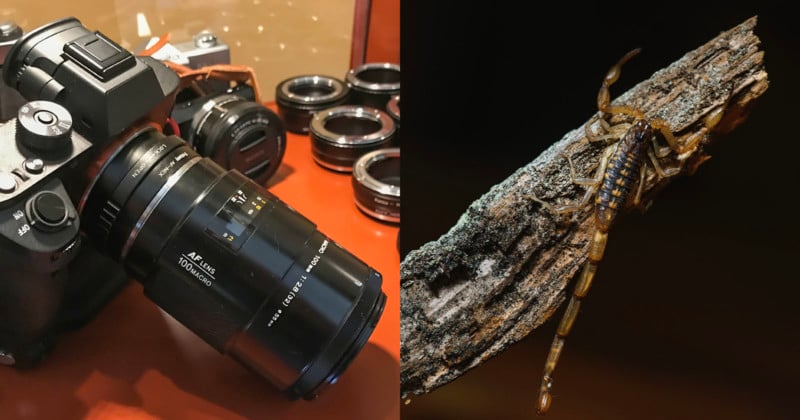 Yesterday was a rainy, hazy day at home. I didn’t feel much like going anywhere but I needed to find something to do that didn’t involve sitting or work. I decided to break out one of my macro lenses and a flash with soft box diffuser to go macro hunting around the house.

The random breaks in the rain would give me a few minutes at a time to venture beyond the front door to explore all the plants we have around the house. This macro safari managed to keep me entertained for the afternoon and on into the evening. I started out photographing some flowers but soon found some other more interesting subjects.

I chose for this residential adventure the versatile, amazingly capable AF Minolta 100mm Macro f/2.8 coupled to a Sony a7R II via a dumb (no communication with the camera) metal adapter.

This lens is capable of reaching 1:1 reproduction without an extension tube. I picked this lens up from a local camera shop a few years ago for a swell, used price of around $250. Considering the fact that it’s the same optical design as the modern Sony 100mm macro (Sony now owns Minolta), it’s a no brainer.

Why spend many hundreds more just for a Sony badge? This old Minolta mated to one of the most advanced, high-resolution cameras on the market shows just how good it still is. You’d be hard-pressed to find anything modern, at any price, that can outperform it.

Coming up are some photos made with this lens. Flowers and insects abound in Florida! 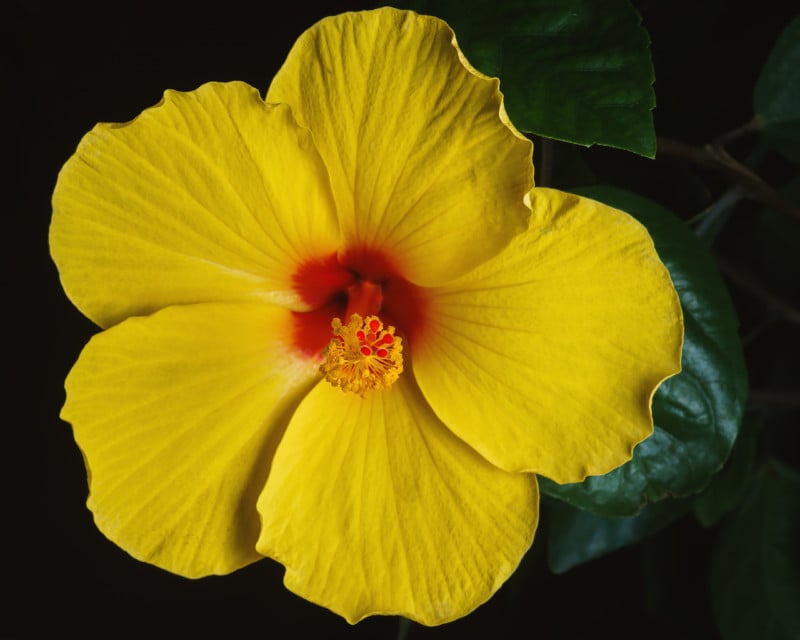 Here is a 1:1 macro of this same flower’s stigma (red bit) and anther (yellow stuff). 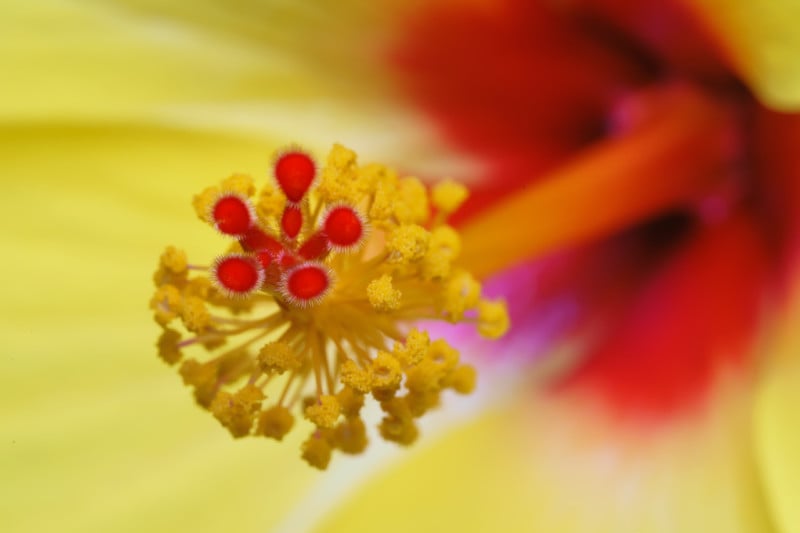 Another 1:1 shot, this time of the tiny white flowers nestled between the pink, papery leaves of a Bougainvillea vine. I have no idea what kind of flowers these are. Each is about 1″ in diameter and sits in a hanging basket alongside some other pretty stuff. A striking portrait of the new flowers on one of the Crepe Myrtle trees that line the driveway. Using a fast shutter speed and a tiny aperture of f/32, all ambient light was cutout, leaving only the flowers exposed by the closely positioned flash mounted in a 12″x12″ soft box. I like this shot because it includes all phases of growth: new buds, opening buds, open buds and then the full flowers. 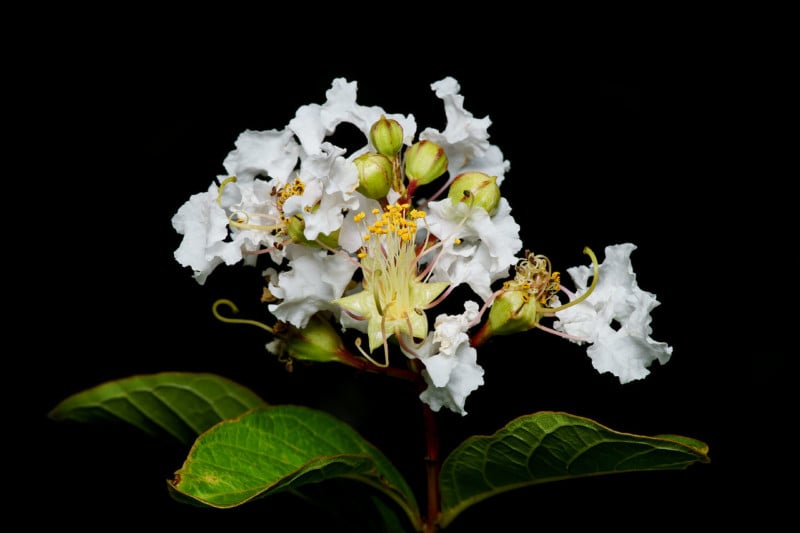 I spotted this teeny tiny Long Legged Fly (Dolichopus Condylostylus comatus) resting on a frond of a palm tree; it’s about 1/2 the size of the common house fly but at 1:1 reproduction, you can really get in close to see all the interesting details. To me, it looks like some kind of alien flying machine. After about half-an-hour of not finding anything else to shoot, I went inside to call it a day. That’s when my wife spotted a Florida Scorpion (Centruroides hentzi). These little guys are very common around here. They’re only about 1.5″ long, head-to-tail, and pack a very non-threatening venom that causes about the same sort of short-term discomfort as a bee sting.

Up close, I think they look like land lobsters. I’m not a fan of eating bug meat from the sea so this doesn’t bother my appetite any. After catching this little guy, I placed him on a piece of old, weathered Live Oak I staged on the dinner table. The scorpion was quite happy to remain on its perch no matter how many times I repositioned it or nuked it with the flash. 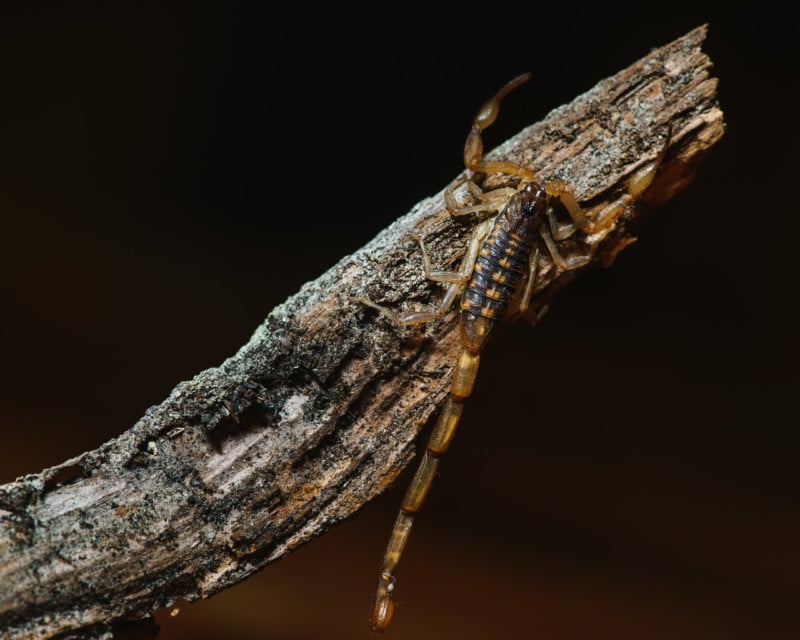 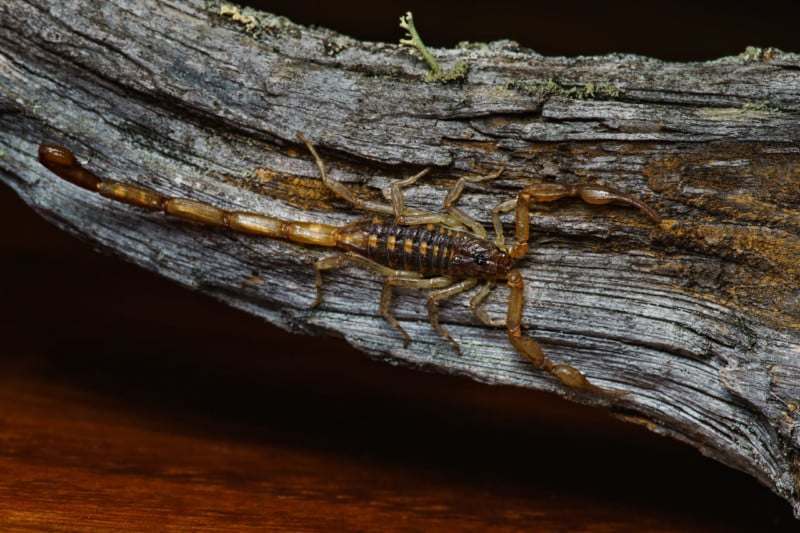 I had some closer shots but I preferred these images that showed the whole body. What an interesting critter! The scorpion never attempted to strike at me, preferring to lie flat and still, hoping I would just go away. When I was finished shooting these photos, I took the little guy outside and let him loose in a mound of pine needles at the base of a tree. I don’t mind having these around since they help control the population of other, ickier insects.

What a fascinating way to spend an afternoon! A good macro lens can have an enlarging effect on your sense of the world around you. Your neighbors will probably think you’ve lost your mind as you become more and more obsessed with crawling around in the dirt and rummaging through your planters looking for new things to get up-close with, but it’s worth it. Even the tiniest of yards will provide an endless supply of subjects if you’re willing to look hard enough.

If you aren’t already kitted out for macro photography, it doesn’t have to cost a ton of money. A simple extension tube set can cost less than $20 and will allow you to mount a lens you already own to get down into 1:2 or even 1:1 reproduction ratios. A cheap manual flash and a sheet of white paper is about all you need for lighting. There are plenty of websites out there with suggestions and reviews for this sort of thing. The world of macro photography promises to challenge you in new ways while showing you how much detail there is in nature that we often take for granted.

How to Isolate a Moving Subject: Panning for Beginners