Brothers Will and Matt Burrard-Lucas, the same UK-based duo who created a remote-control BeetleCam to photograph wildlife in Africa, decided to get up-close and personal with some of nature’s less desirable creatures. The two originally noticed mosquito larvae in stagnant water sitting in the backyard of their home, and decided they’d found their next photo subjects. They patiently set up the photo shoot, waiting for key moment when the adult mosquitoes emerged from their larval state. It’s fascinating how delicate and alien the pesky critter is up-close: 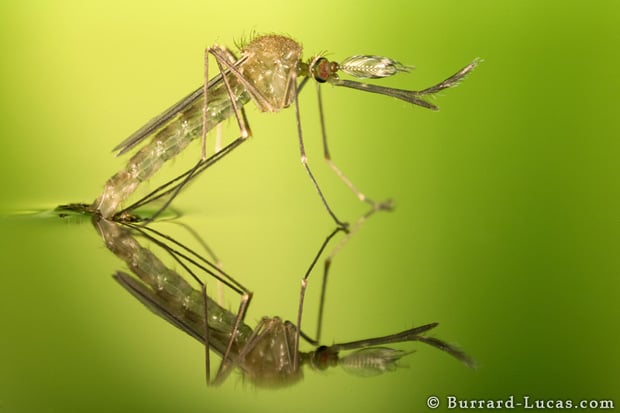 Their patience and planning went a long way, Will tells us:

We did a bit of research into their development and discovered that it takes about 1-2 weeks (depending on the temperature) for them to develop into the adult form. This gave us a good amount of time to devise a set up to photograph them as they emerged.

Over the course of about 14 days, we kept a keen eye on their development. We kept the larvae in a glass of distilled water indoors and covered it with perforated cling film – we didn’t want to suffer any bites during the night! Once the larvae had turned into pupae, we knew they were close to hatching. We soon discovered that when one straightened out, we had about 5 minutes until they hatched. 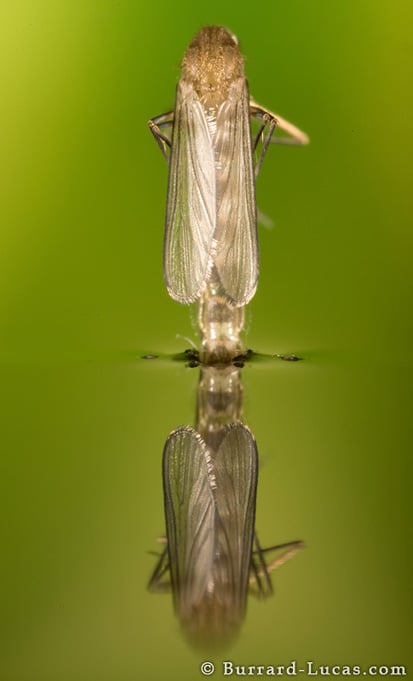 Will also told us about setting up the shoot:

We transferred the mosquito into a pot of water and made final adjustments to our setup. We were using a Canon EOS 5D with a Canon MP-E 65mm macro lens. For the lighting, we had three flash units – a macro ring light and two supplementary speedlite flashes. Additionally, we had two halogen desktop lamps to illuminate the green
printed background. Working at such large magnifications meant that we needed plenty of light to keep the ISO low, the aperture small and shutter speed high.

In order to obtain a strong reflection, we had to get an extremely shallow angle with the surface of the water. An aperture of around f/16 provided a sufficient depth of field. The mosquitoes were only a couple of millimetres long so in order to get the required magnification, we zoomed the lens in to 4 times.

After a mosquito had fully emerged from its pupal case, it would rest on the surface of the water for a few minutes whilst it pumped fluid into its wings. In total the whole process took no more than 5 minutes from start to finish.

It really was an amazing transformation to observe and the project gave us genuine respect for these much-hated little insects! 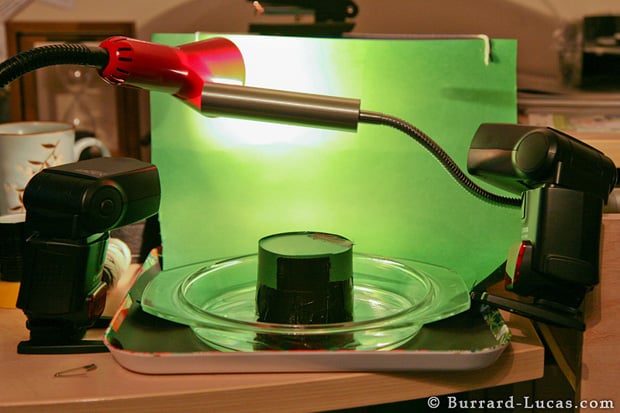 A keen eye for the small details certainly yielded some big results. To see more of the Burrard-Lucas brothers’ wildlife work, visit their website.

Image Credits: All photographs by Will & Matt Burrard-Lucas and used with permission

A Picture of the Future with Canon Wonder Camera Concept