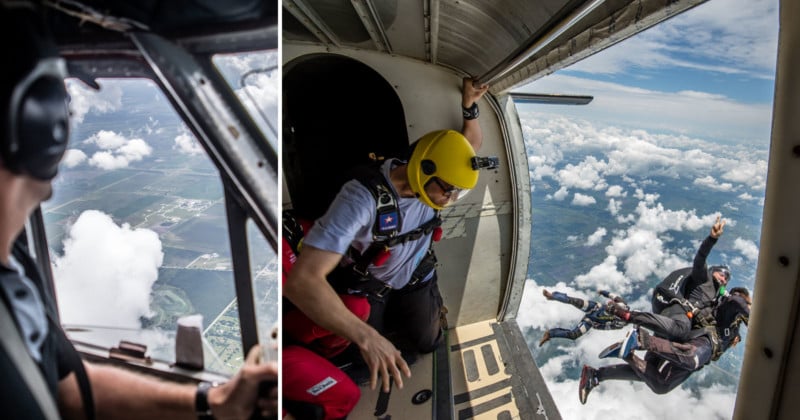 A little while back, I was working for a small local newspaper outside of Houston, Texas. I was working on a series about adrenaline junkies around the area. One article I really wanted to write was about skydiving at Spaceland Houston.

Its one of the larger skydiving places in Texas. I had skydived there before, and I knew people would love to see what it’s really like. And as a photographer, I really wanted to shoot it.

It was a small newspaper I was writing for, so honestly, I didn’t expect to get a response from Spaceland Houston. A few days after I emailed them, they replied and said to come on out. They asked me what kind of shots I needed and what information I need. Before this, I had never shot skydivers before, so I wasn’t even sure what to ask for. But I have learned as a photographer that the most people can do is say no.

I told them I wanted to go up in the plane for two jumps, one of me sitting in the co-pilot seat of the plane as they took off. And the next jump to sit on the edge of the door and take photos as they jumped out. To my surprise, they said yes.

Showing up to this place was a bit intimidating, I had been there before but it was as a skydiver and not as a photographer/writer. I put on my best game face and acted like I had been there before. I have learned that locations like this have a certain type of person they attract. Relaxed hipster type people, wearing sandals and making loud jokes with each other in the hanger. At the same time, it’s a tense place where safety is top priority, this isn’t the type of place where you cut corners to get things done quicker.

Not even 15 minutes after arriving there, they loaded me into the plane. I couldn’t bring tons of gear with me, just one body and two lens. I grabbed my Canon 7D Mark II, my Sigma 10-20mm f/3.5, and a Canon 24-105mm f/4. This was the best combo that I had for this type of shoot. There was going to be plenty of light coming in and I needed that fast frame rate. I wanted some wide-angle shots from inside the cockpit as jumpers went out, at the time I didn’t have a wide-angle lens for my full frame, so this was the best combo.

As we took off, I started snapping away, the lighting was pretty consistent even though we were flying through clouds. I got plenty of shots as we took off and the old plane made for an excellent prop against the back drop of the clouds. I couldn’t have asked for better a situation. 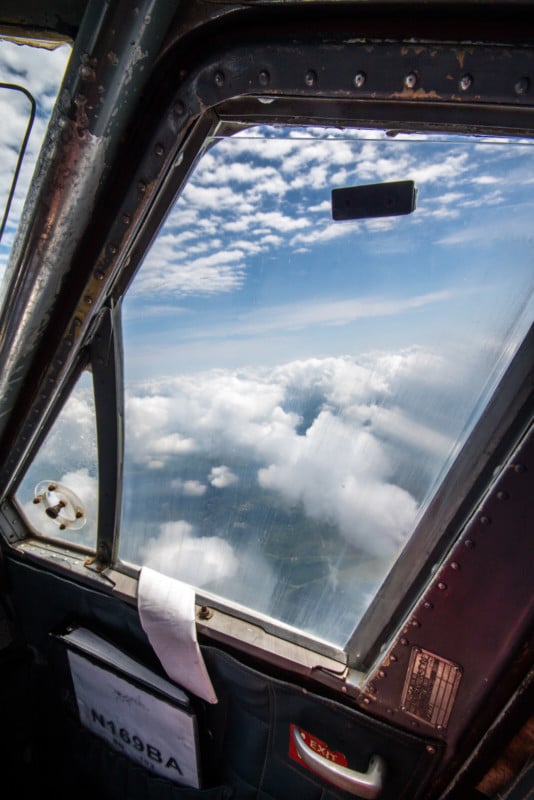 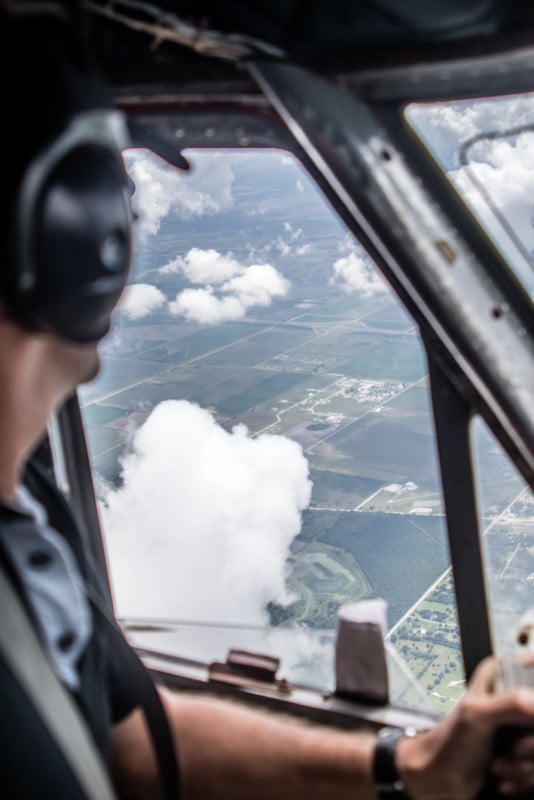 After the last jumper went out on the first flight the pilot immediately took a nose dive straight down. Unknown to me at the time, this was the most fuel efficient way to get back to the landing area, but it scared the crap out of me! While we nose-dived from 20,000 feet, I semi-calmly changed lenses and snapped pictures the whole time. I thought “If I’m gonna die, I’d better get some good shots on the way down.”

We landed and I went to go to my area where I had my other gear sitting to catch my breath and review my shots. Right when I walked into the room the manager ran up to me and said, “Hey since you’ve jumped before, you wanna jump again today?”

And as an adrenaline junkie myself, I said, “Yeah I do.”

She said “Okay good, since you’re gonna be sitting on the edge of the door, we’re going to have to strap you to one of our guys anyways, for safety. Since we’re doing that, you can just jump out with him at the end. But the next take off is in 7 minutes, so we gotta hustle!”

I was already in their system, so my waivers were good and I was cleared to jump. I ran over the jump prep zone and threw on a jump suit. I was only able to bring just my camera and one lens, at this point I had to figure out if I wanted to use the wide or the mid range lens. I went with the wide angle Sigma, figuring I could always crop in some if need be.

I met up with Hank, the grown man I would be strapping myself to, and we loaded up on the plane. I didn’t really have time to think about everything — it was just hustle time. I threw my camera in program mode as we took off. I didn’t have time to adjust my settings until we were in mid-air, and I didn’t want to miss any shots on take off. Once we got up to our cruising altitude I changed to manual mode and got my setting right.

The take off was pretty awesome, they leave the door open on take off and the fearless skydivers dangle their feet out of the plane on take off. At one point someone just posted up and tied their shoes while one leg hung out of the plane. The whole time I am strapped to Hank and I am half in the plane half out while getting the shots. 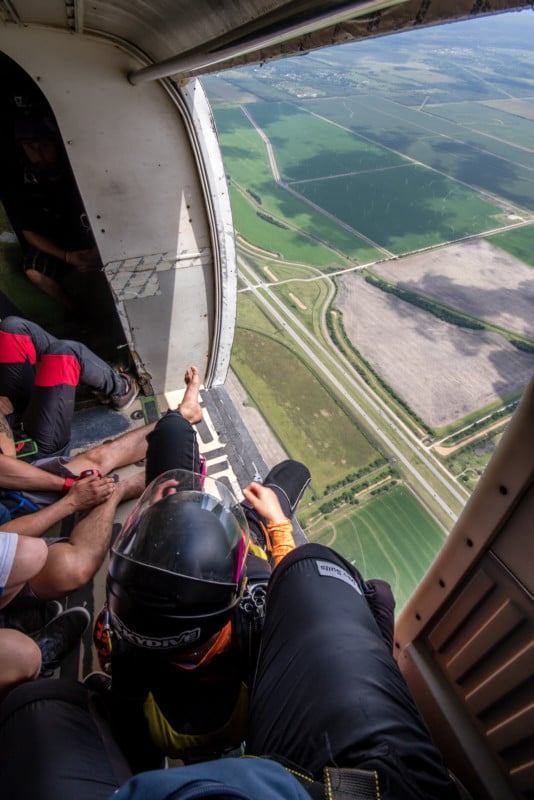 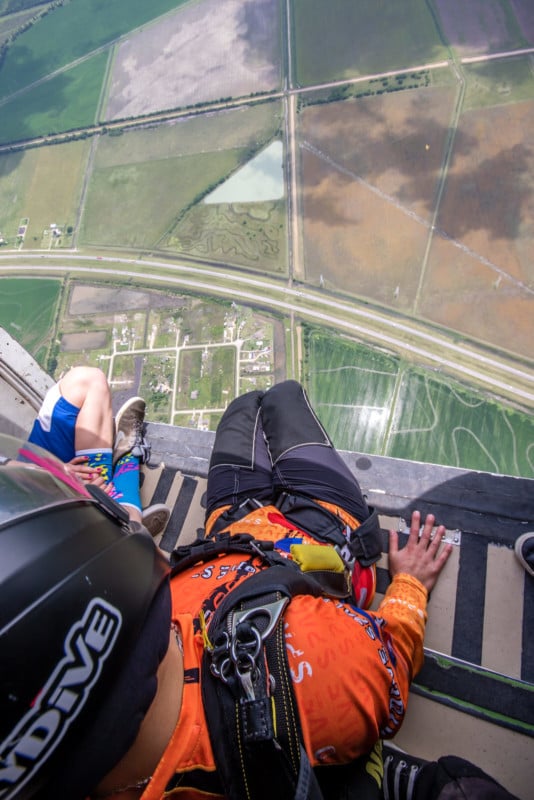 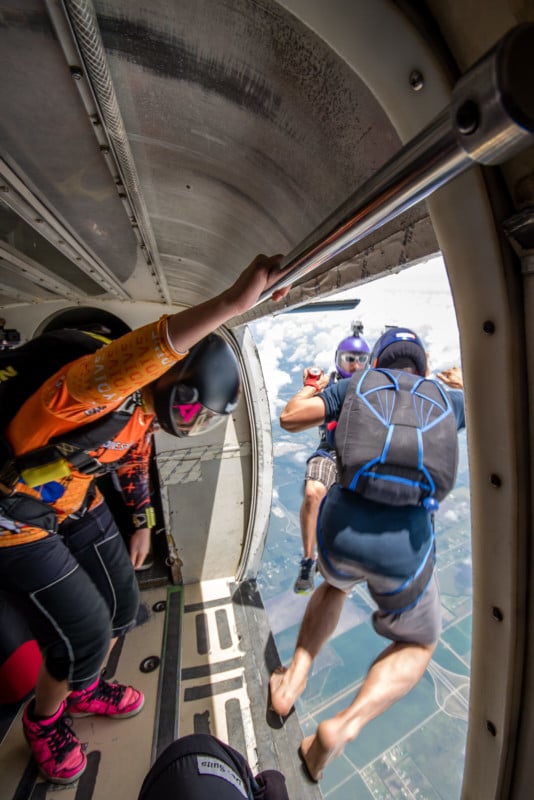 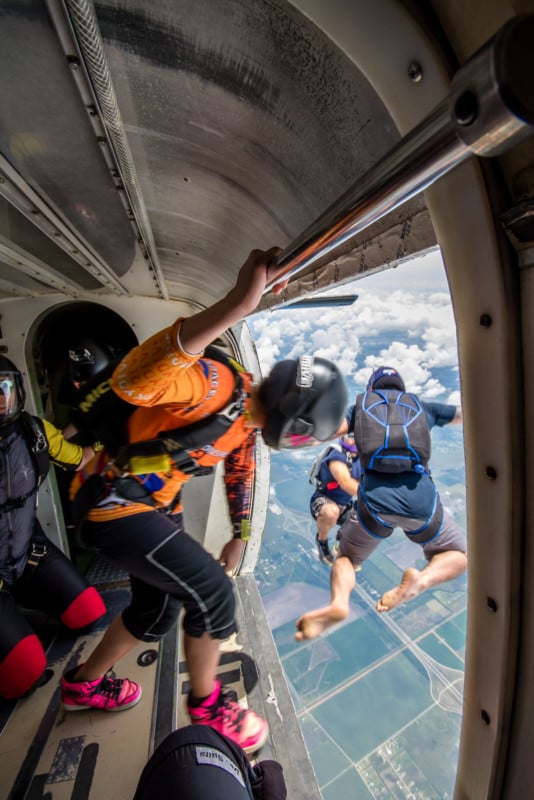 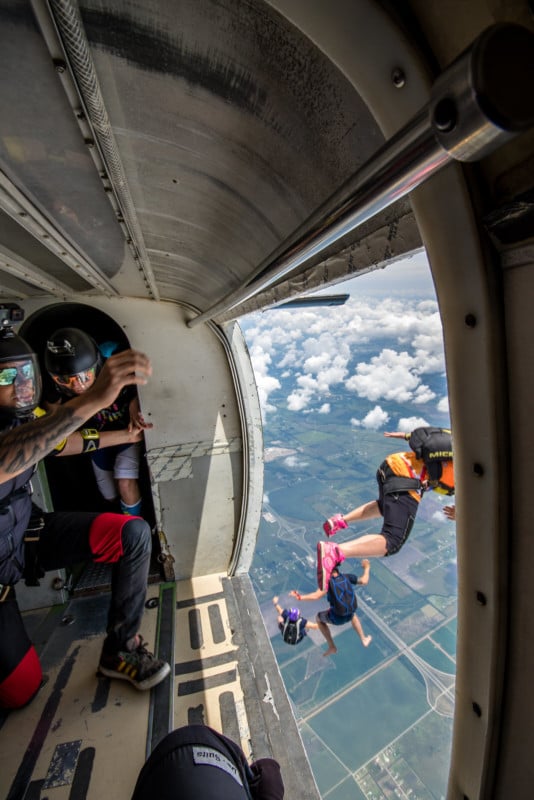 A lot of the people who work there use cameras as they jump to document the experience for other people. Most will have a GoPro or a Sony action cam strapped to their helmet. Some of the more experienced jumpers have a Canon rebel T5 or SL1 strapped down to their helmet and a remote trigger that runs from the camera to a custom button that they keep in their mouths. So as they jump they will position themselves and take pictures by biting down on the remote. 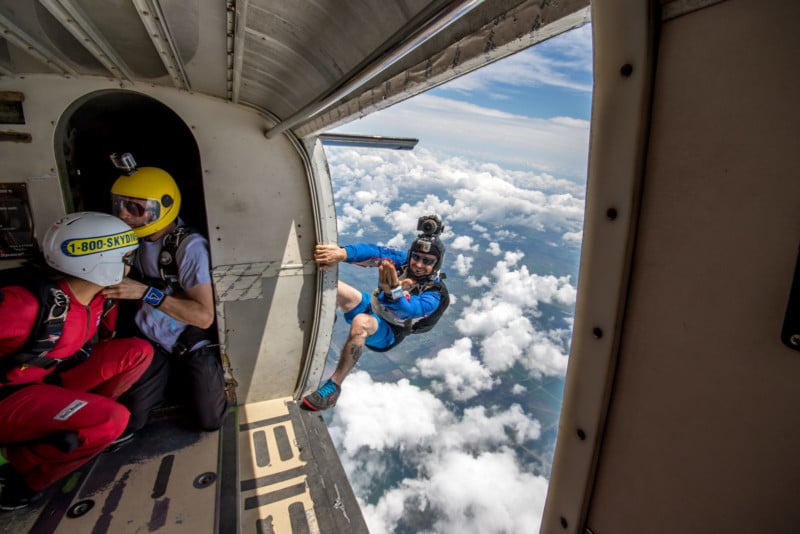 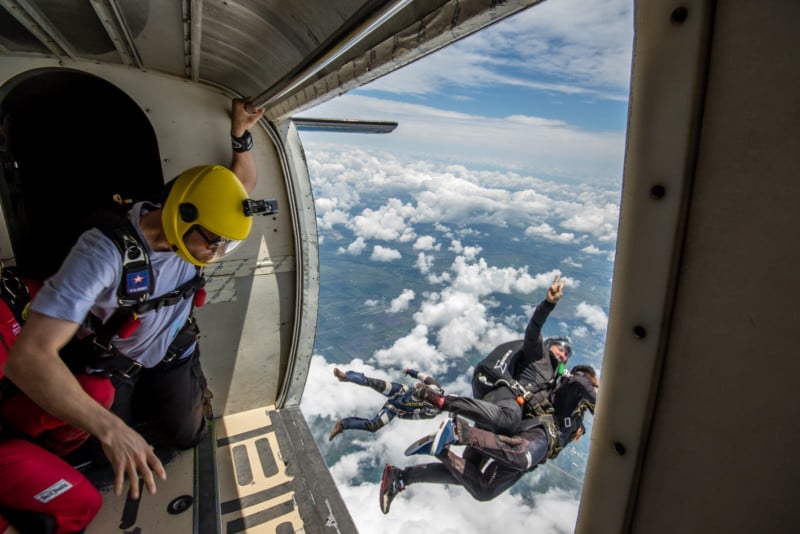 After the last jumper went out, I took a few more shots. Hank tapped me on the shoulder and asked if I was ready. We slid to the front of the plane and handed off my camera gear to the pilot, and then we jumped out.

As a photographer, the whole experience is something I absolutely loved. Besides the awesome shots, it was something that reminded me to always be ready for anything. Photography is often planned out and very calculated, but there are many circumstances that push us to things where we have to think on our feet and make quick actions.

Not always to the extreme that I just described, but things like an outdoor wedding being moved inside, an engagement shoot where it starts raining, or your flash going out as the bride walks up the aisle. Things that you always have to be ready for, because good photographers don’t say “Oh, well I didn’t plan for that.”

About the author: Michael Flores is a photographer based in Houston, Texas, and a multi-platform journalism student working with local newspapers and magazines. He works in a camera shop right outside Houston. You can find his work through his project 360houston, which can be found on Facebook and Instagram.

Pro Photographers with Amateur Gear vs. an Amateur with Pro Gear

VSCO Brings Its Mobile Photo Filters to the Desktop