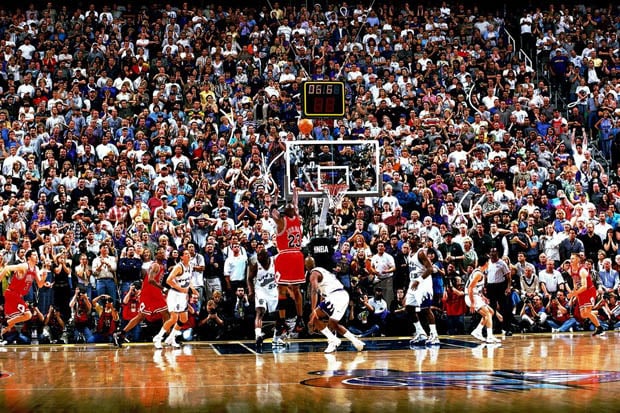 This photo is the greatest sports photo of all time — at least according to Sports Illustrated. The magazine has published a gallery containing 100 of the greatest images (from an American’s perspective), and the #1 image is the above shot of Michael Jordan hitting the game-winning shot to help the Chicago Bulls beat the Utah Jazz and win the 1998 NBA Finals in 6 games.


John Schuhmann over at the NBA’s Hang Time Blog published an interesting interview with Fernando Medina, the photographer behind the iconic photo:

The image was photographed on slide film, so unlike the digital cameras of today, I had no way of seeing the photo until it had been developed by a film lab […] I knew the camera had triggered, but, I had no way of knowing if the flash strobes had fired

[…] I headed to the local film lab that NBA Photos was using to develop the game film that evening. That was the first time I saw the image. No one had found it yet in the dozens of bags of slides from that night. Knowing how I had marked the specific film bag, I found it, opened the box of slides and it was the second image I pulled from the box. I held it up to the light and looked at it for a moment, handed it to Amati, and never saw it again until it was published in ESPN Magazine. That was the first time I was able to actually “see” and truly appreciate the photo.

The television broadcast footage of Jordan hitting the shot has become an iconic clip in sports history as well: