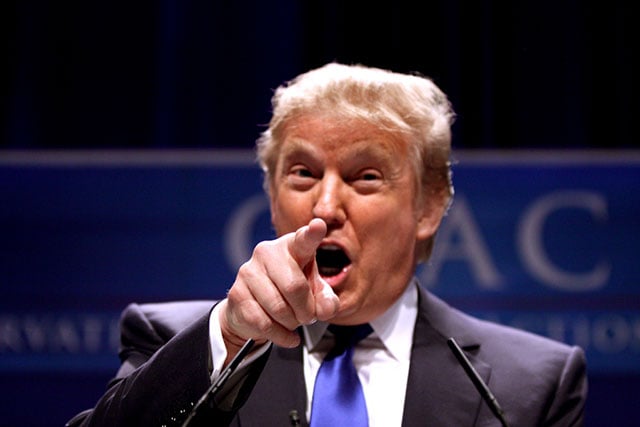 Donald Trump is lashing out at an Associated Press photographer over photos of empty chairs at a Trump speech in South Carolina. The presidential candidate is accusing the photojournalist of portraying a dishonest story through his photos.

Photographer Mic Smith covered the event in Charleston, South Carolina, on Wednesday. The photos he transmitted to the Associated Press appear to tell two different stories: one was a closeup of the front of the room, showing Trump speaking to a crowd of people seated and gathered around him:

A second photo shows the same scene, but from the back of the room. From this perspective, it appears that a great number of chairs in the room were empty:

Trump claims that the room was actually full, and that the chairs in the back were empty because people had left them to crowd around him at the front of the room.

“The photographer [Mic Smith] is a f***ing thief,” Trump said in an interview with The Daily Mail. “Tell them they’re a fraud, whoever took it. I just got killed on that thing, and it was just really unfair. It’s godd**n unfair.”

“The point is that everybody from the back rushed to the front. And the people who put out the pictures knew it. And they said, ‘Oh, look! The back 25 per cent [is empty]’. I was speaking from the podium. Everybody was wrapped around the podium. If they hadn’t done that, there wouldn’t have been an empty seat.”

Politico reports that photos and Tweets from other journalists and other outlets appear to confirm that there was unfilled capacity.

Jane C. Timm of MSNBC reports that Trump spoke to “a half-full room of white people.” New York Times journalist Jonathan Martin reports that “about a third of the seats were unfilled.”

My report from SC on Trump, whose first event had scores of empty chairs > http://t.co/AXWidtmZzr pic.twitter.com/1Mpqa8nDww

People immediately began accusing Martin of lying with his photos as well, claiming that they were shot before the event, when the room was still filling up:

Trump himself took to Twitter to call Martin “dishonest”:

This controversy is an interesting example of how a photojournalist has the power to paint the same scene in different ways: one photo can show a celebrity candidate surrounded by a crowd of supporters in a packed venue, while another from a different perspective can show an event that wasn’t able to attract enough supporters to fill out the seats.

The Associated Press is standing by its descriptions and Smith’s photos of the Trump speech, telling Politico that: “We are confident that the description of crowd size is accurate.”

RED Unveils the RAVEN: High-End 4K in a Lightweight Camera That Costs $5,950