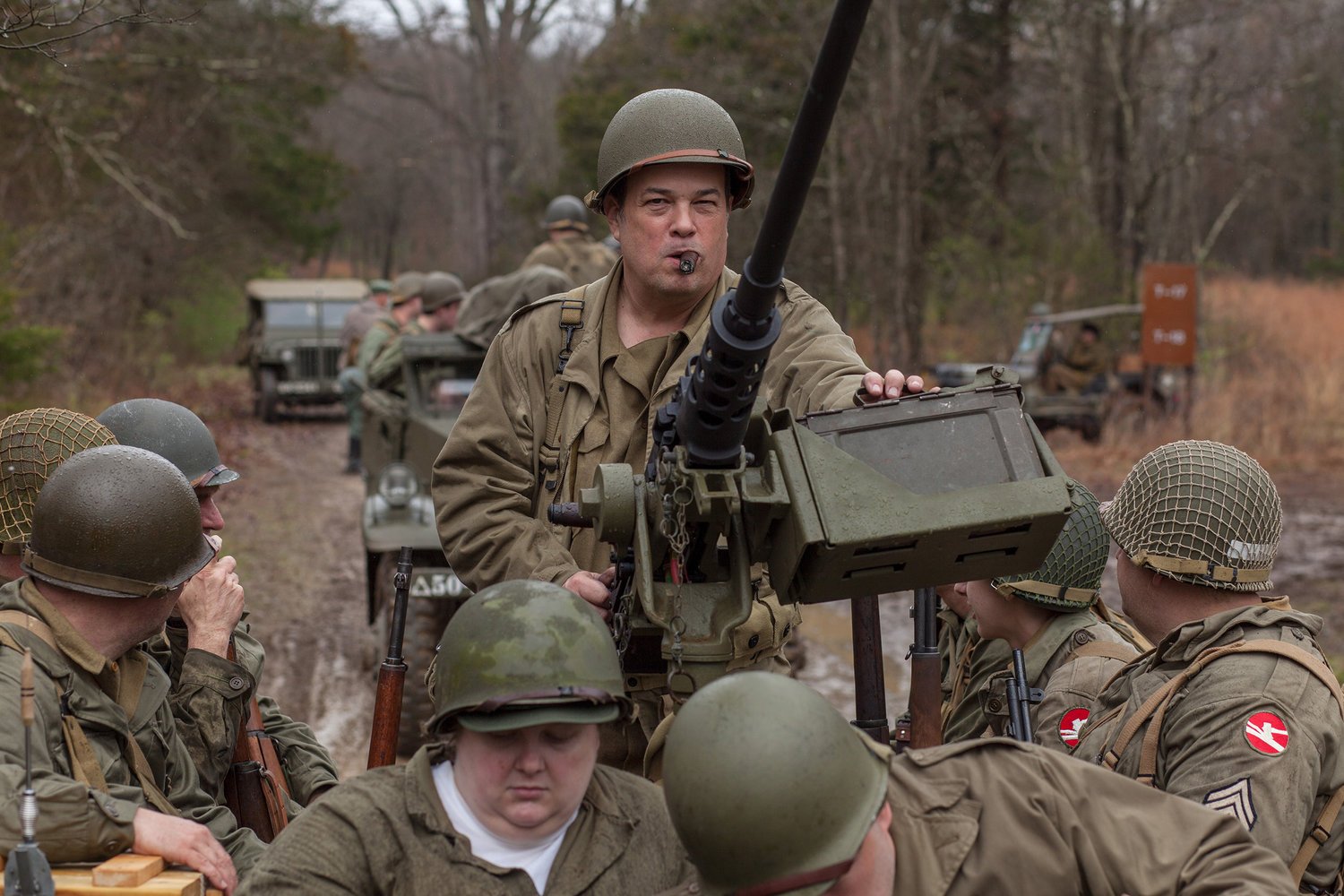 Have you ever wondered what World War II was like? Last month I got a little closer.

I was one of three photographers invited to cover a semi-live fire reenactment. There were times everything looked very real and other times it looked like a bunch of older kids in the woods playing war.

It started one night last year when I went to a singles party at my friend Tim’s house. No one else showed up. I forgot what he said but he put a VHS tape into his VCR and hit play.

He had told me about his World War II reenactment group but I had no idea how big it was. The tape was more than a few years old but described an annual weekend where fellow World War II reenactors, drawn together by this historical fascination, engage in battle in the woods of Eastern Missouri. He invited me to go and I said what we say these days when we aren’t sure… “I might go” or “that looks good I’ll have to see.”

Fast-forward to March 25, 2017. The event is called “Weldonkrieg” and is a private WWII tactical battle weekend. Since the event is private and has the permission of the US Army Reserve Training station in Weldon Spring, MO they can engage in a semi-real battle using movie-blanks for ammunition. It only takes one battle to be able to ID friend-or-foe by the sound of the weapon. 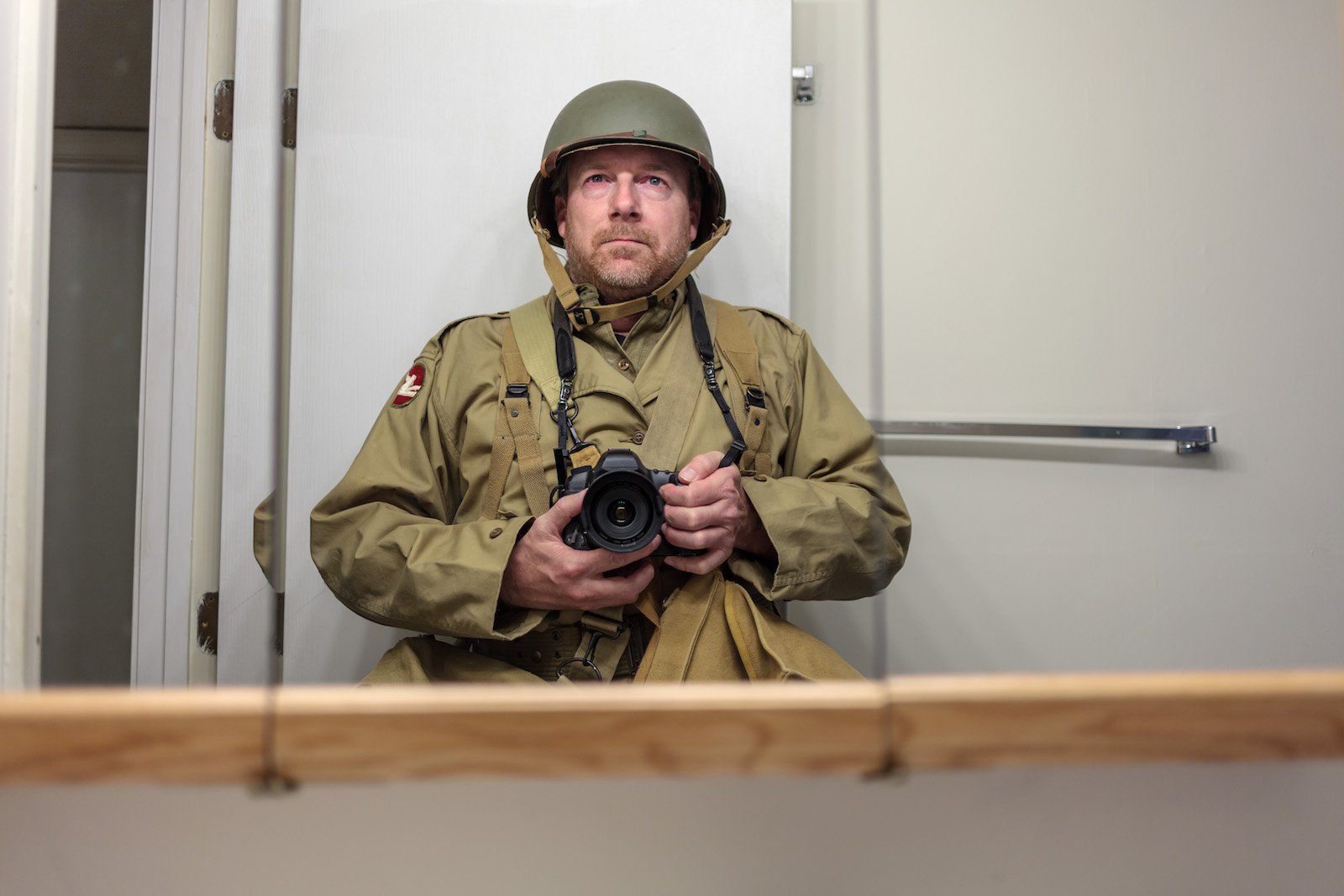 To participate you need to be part of a “Unit.” For example, there was an Italian Machine Gun unit. They were from Kansas City. In addition to having a “Unit,” you could only bring in clothes, guns and vehicles from World War II. Reenactors with guns used either movie blanks (gun shells with gunpowder but no bullet) or, in the case of machine guns I think it was propane, to fire the guns. 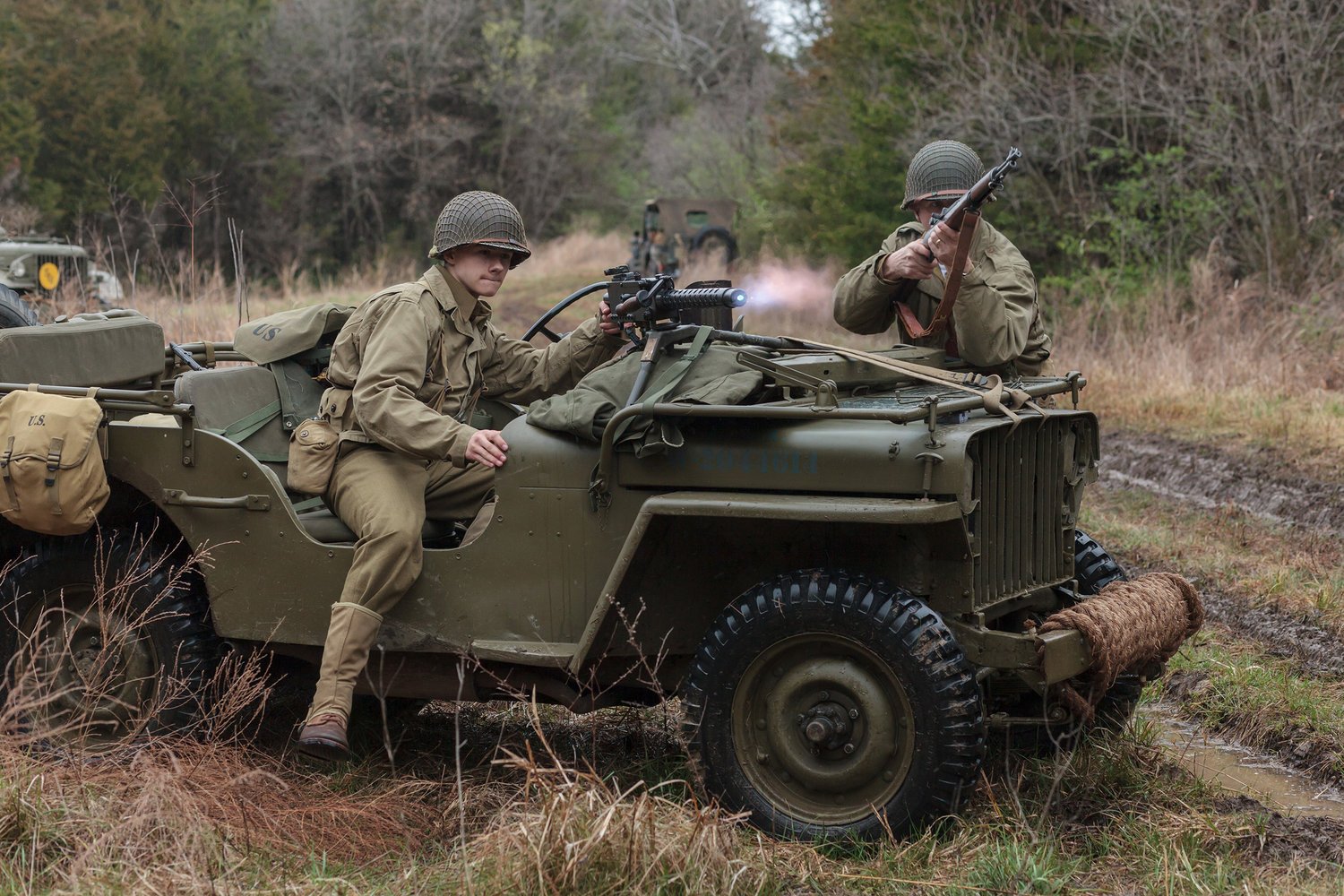 Units often stay in touch and coordinate online. There’s a lot of shopping for WWII uniforms, guns, vehicles and other period items to build an authentic “character.”

Imagine a military parade ground with Allied and Axis troops standing at attention while the exercise commander speaks in front of a German tank. Now you are getting the idea. I took a few pictures of the Germans after the meeting. One asked me “how long have you been in your unit?” I wasn’t sure whether he was just making conversation or gaining intelligence (in a fun reenactment kid of way). I responded, “not sure but I’ve been all around.” 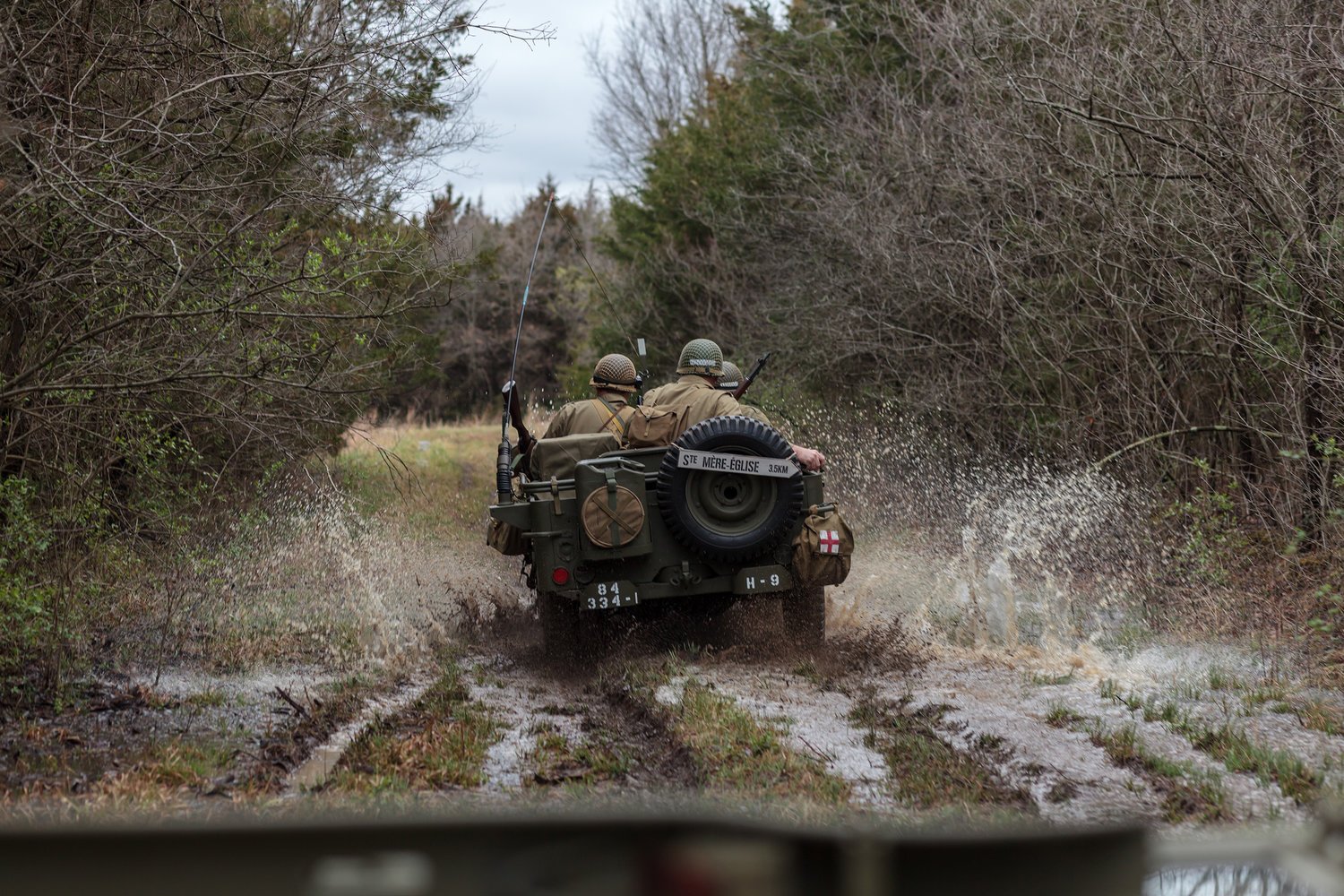 Before long I’m riding in the back seat of a jeep from the war period. We’re all in uniform. The guy riding shotgun had his M1 rifle at the ready. The US Army Reserve Training facility road In Weldon Spring, MO went from blacktop to gravel. We were part of a loose convoy. A jeep trailed us with two gunners and a driver—I found out later it was a father and his two sons.

Our radio crackles and soon we see other jeeps stopped with GI’s jumping behind the vehicles for cover. We hear a machine gun rattling and only faintly see German vehicles.

I grab my Canon 5D Mark II with a 35mm f/2 and a WWII canvas satchel carrying my 85mm f/1.8 and follow a small group into battle. This was the first of many scrimmages or “exercises” against the Axis reenactors.

I chose the body and two lenses because I didn’t want to be weighed down. I also wanted the sharpest images possible. The lens choice was also as close to what they used back then as I could think of. These would be their choice for body and lens for the same reasons I chose them—small, light and quick in response. 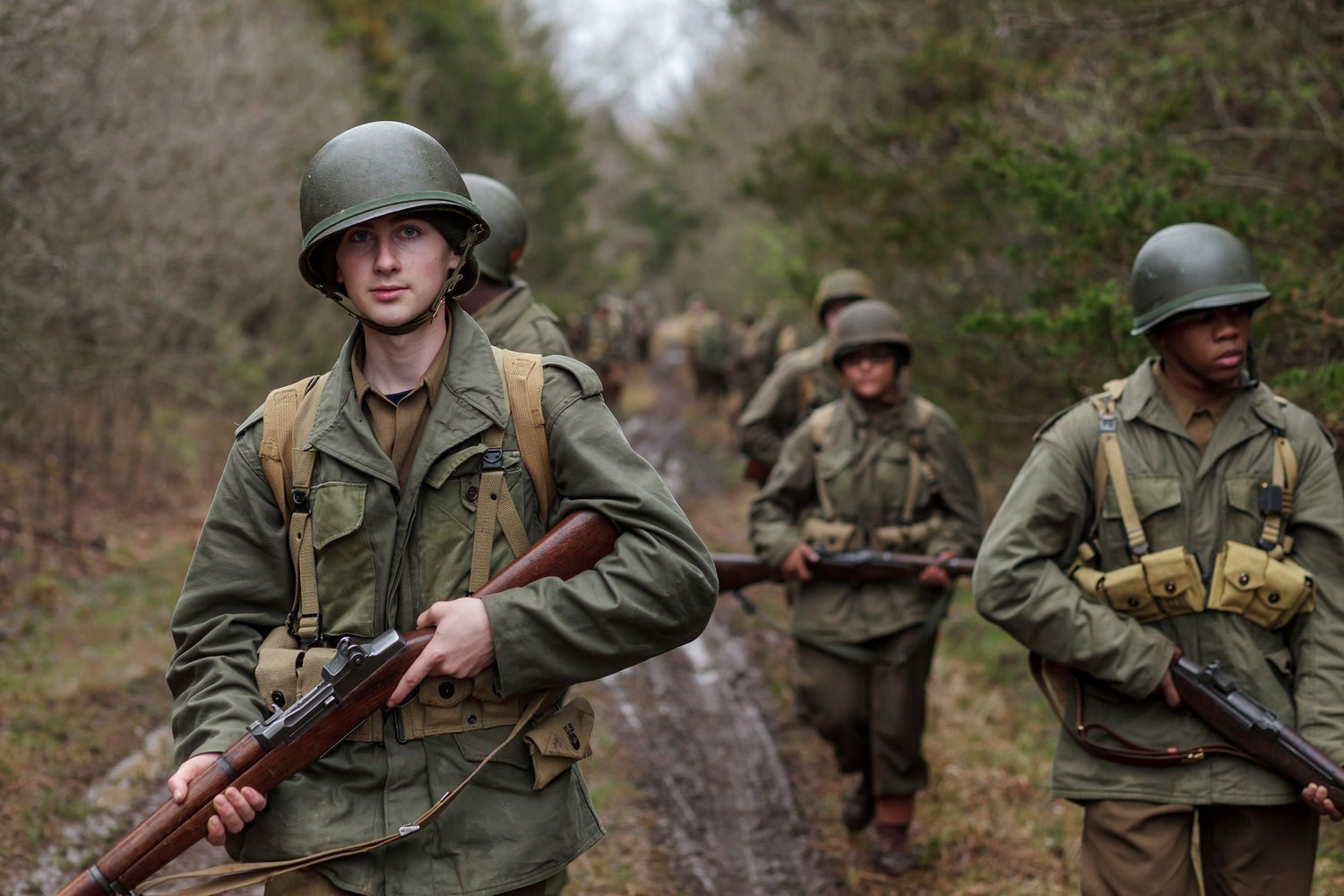 The battles began with distant pops of gunfire as our troops slowly engaged the enemy and ended with groups of helmet-less reenactors watching and cheering from sidelines. The helmet-off shows others you are dead. It’s purely an honor system.

At one point a stout German was running across a road while shooting cover fire with his machine gun. A group of “dead” troops cheered him on. “Go go go!” He began laughing.

I was following two GIs when they spotted a US jeep shooting at the enemy but it was backing up. We watched, crouched on a ridgeline. We heard a German charge on Allied positions. They yelled as they fired. We ran at them, 90 degrees to their left. BANG BANG BANG! My ears rang. A German laying in the leaves pointed at me and another guy, showed two fingers and then made a gesture saying we were dead. 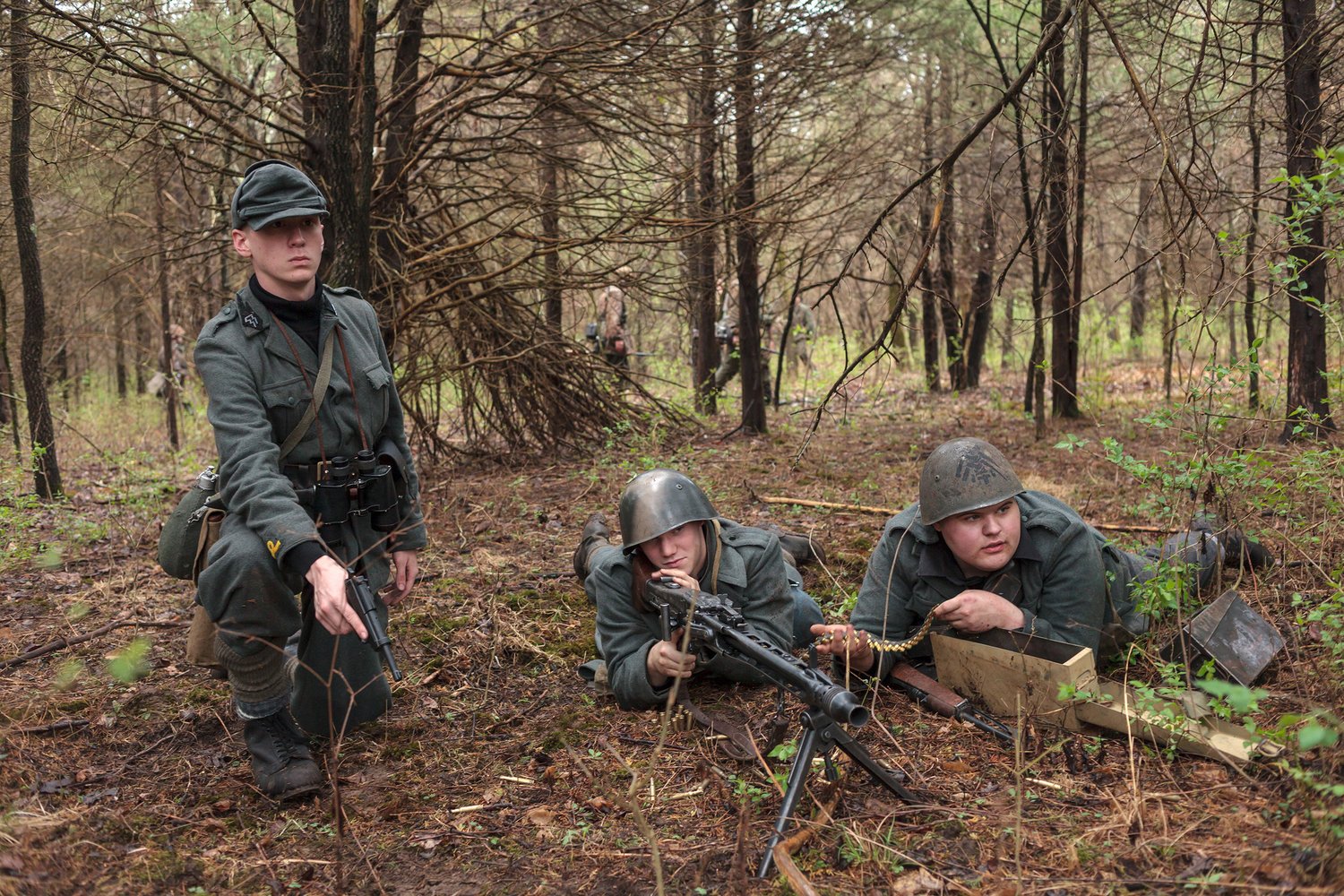 I put down my helmet and packed up my camera making a few pictures as he crept by. A few moments later, he was dead… helmet off.

When I was killed for the second time, I walked into the woods to see what I could see. An Italian Machine gun unit sat waiting for prey. They said, “Hey can you get a picture of us?” Sure. There’s nothing odd about this; party pics in the middle of gunfire in the woods.

They were from Kansas City, just a group of friends who wanted to learn more and enjoyed participating in this, although they usually wage war at similar events in Kansas. 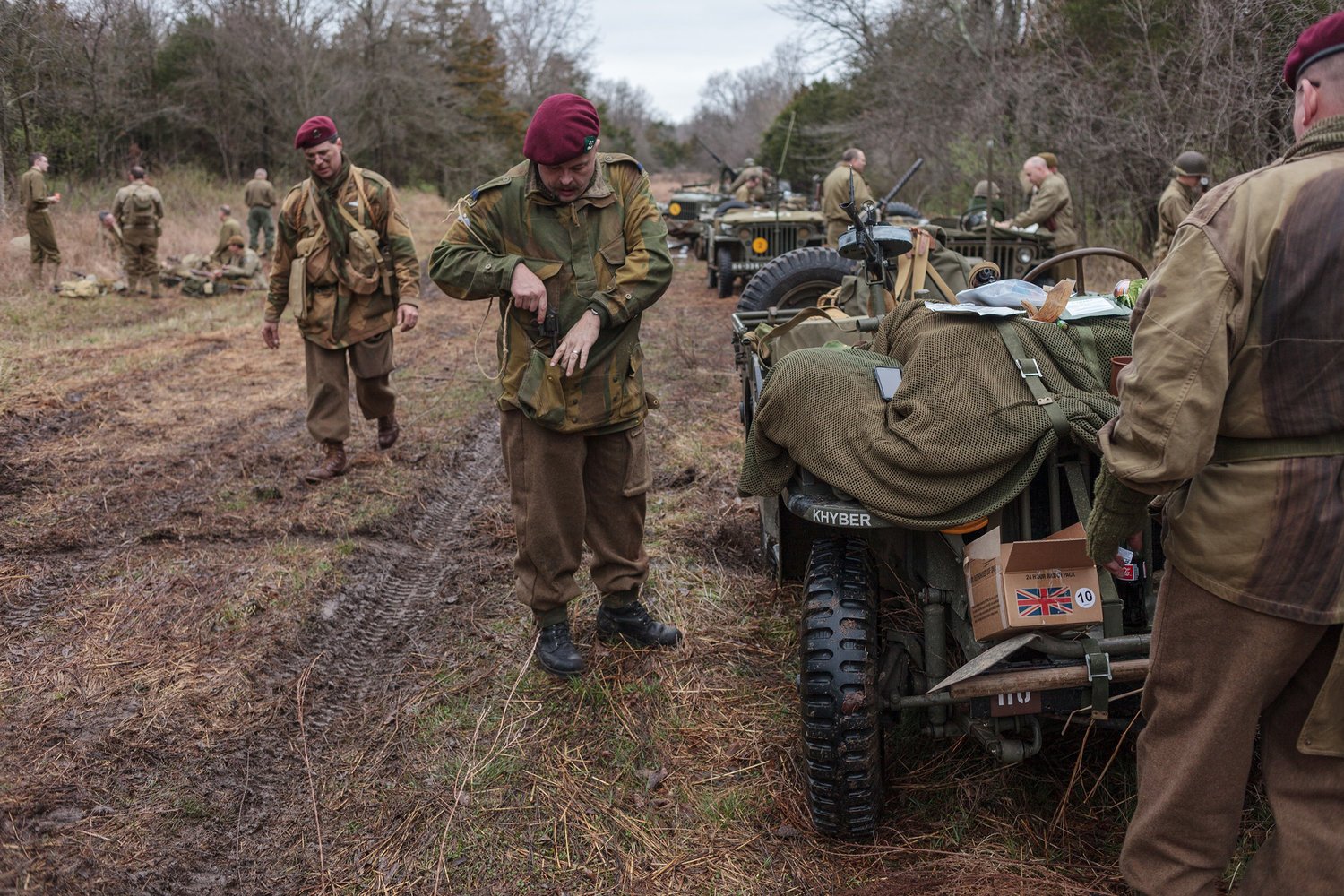 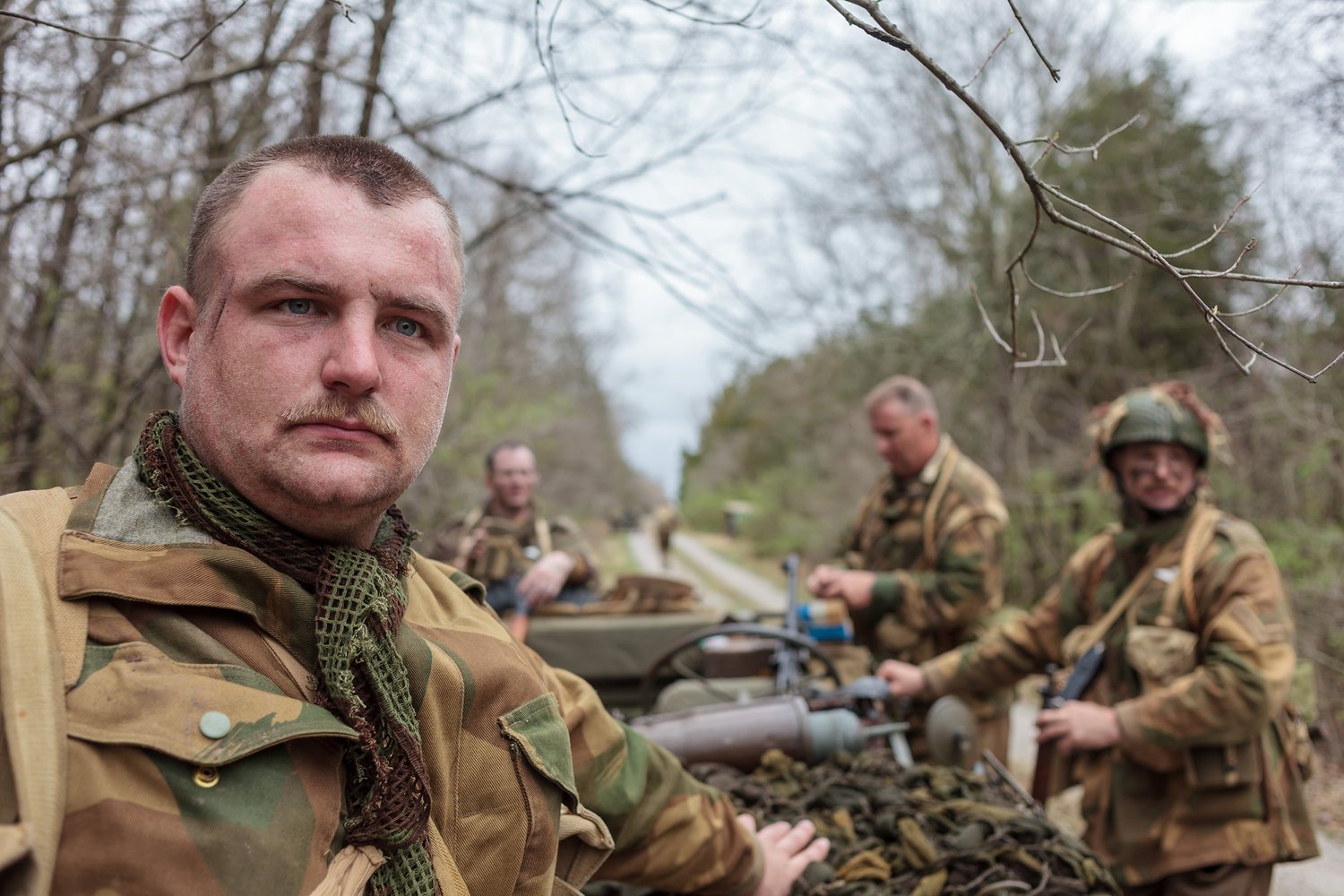 Throughout the day I was blown away. Everything looked so real.

At times you could tell it was 2017—the German on Facebook Live, the Jeep commander making a picture or two as the convoy was stuck in traffic. Other times, it seemed very real—the GI who kept a naked b/w photo of a woman in his helmet, the kid cleaning his M1 rifle outside the barracks at the end of the day or the smoking of cigars and passing around a flask before battle.

The reenactors enjoyed bringing little details to their presentation, and at the end of the day they gathered in small circles around the barracks or near the jeeps and told stories of generals and battles they had read about.

The goal of the event was not battle or guns but living history. How better to learn about a period in time then reliving it as best as one could. 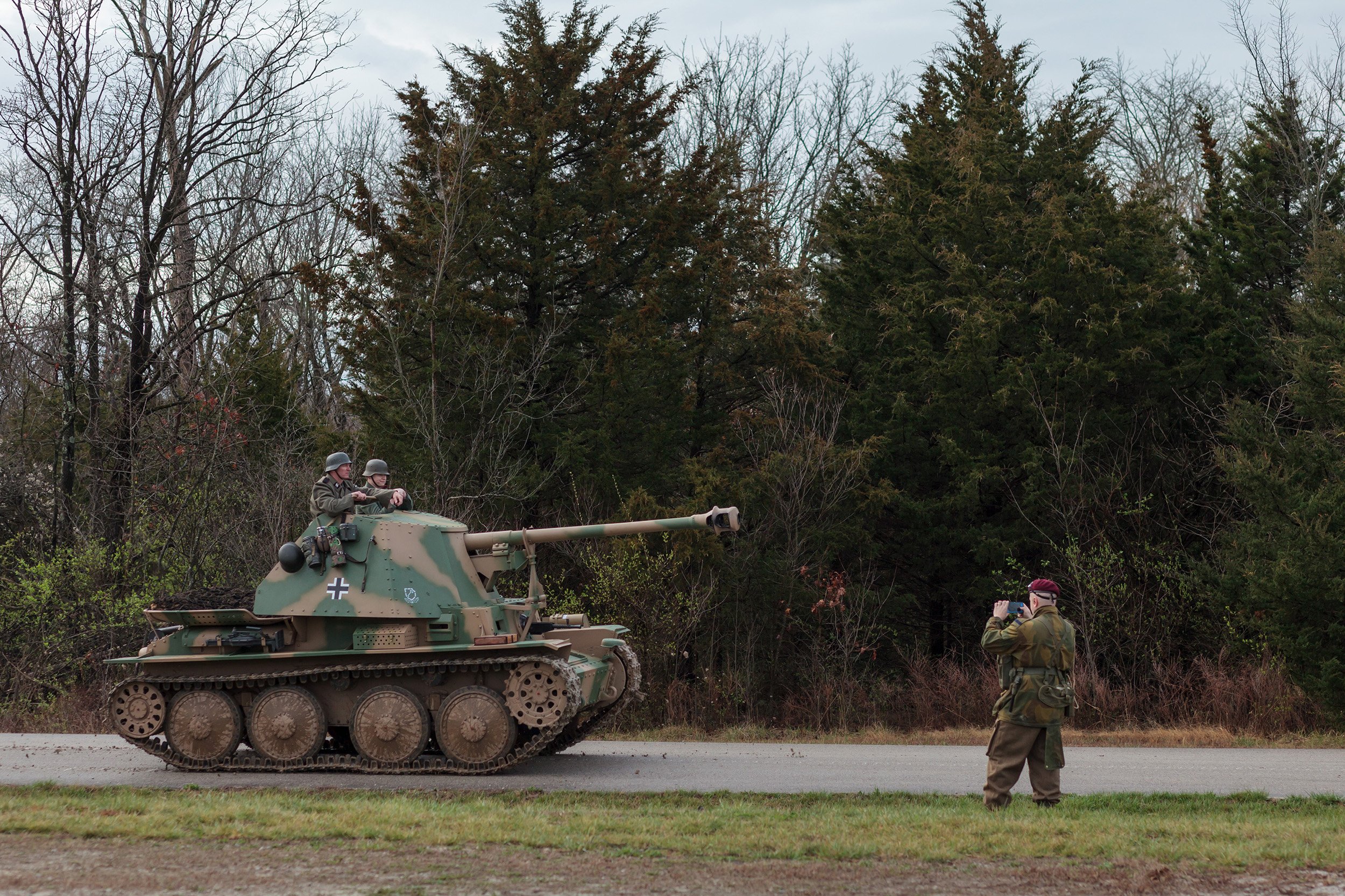 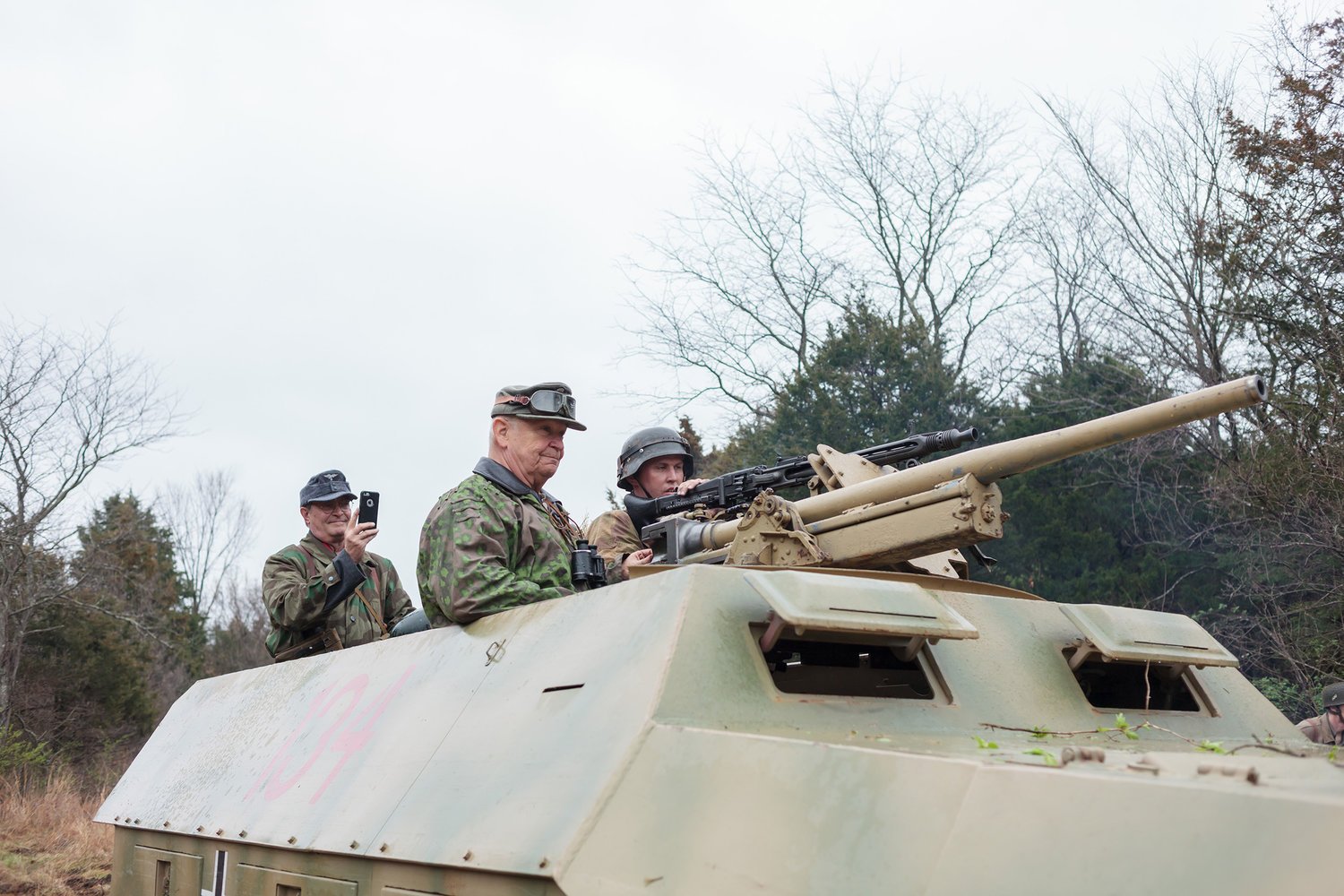 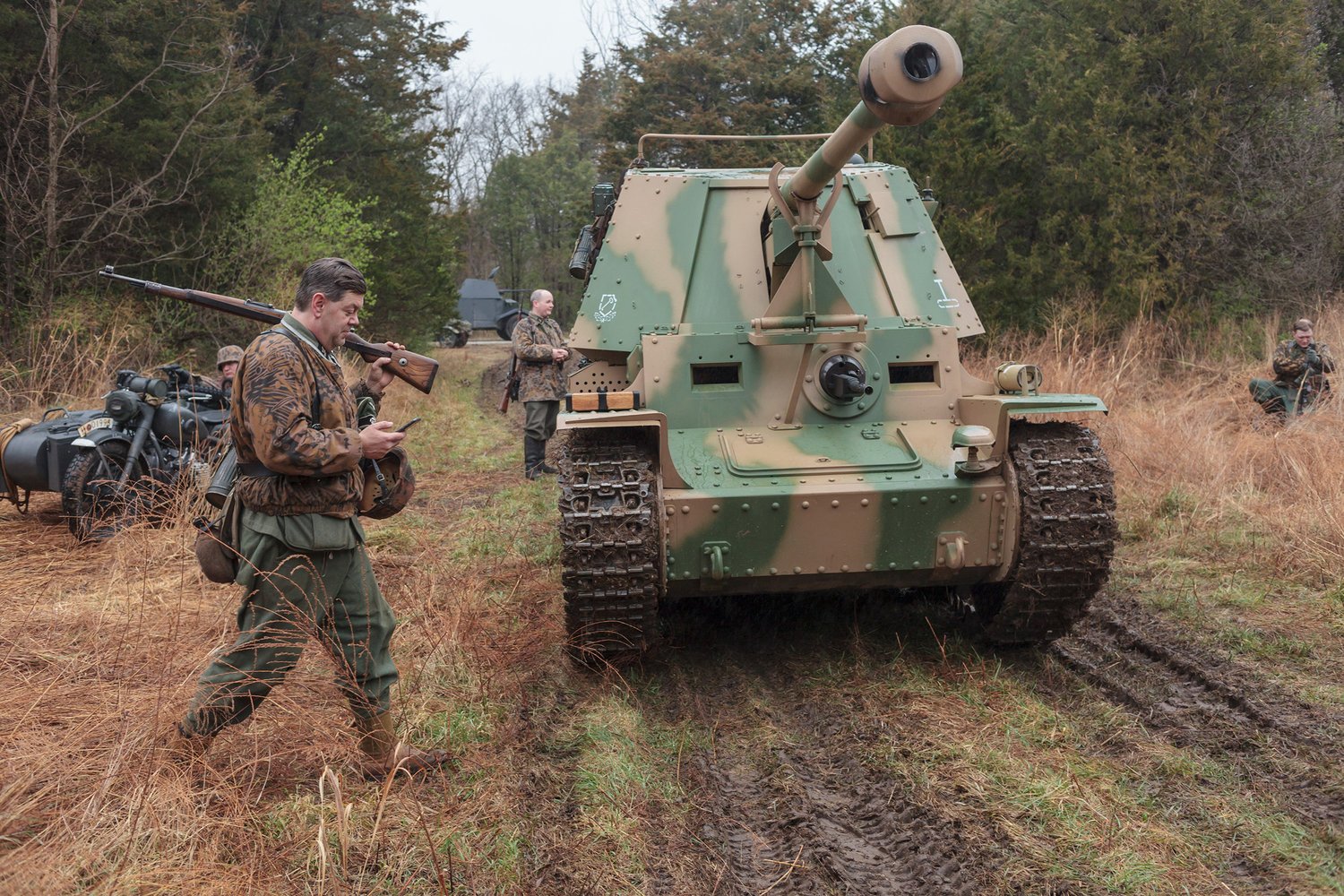 I forgot to charge my camera the night before and by mid-afternoon it was very low. I told my jeep driver I was walking back to barracks.

I walked on gravel and then on blacktop for I don’t know how long. Tired from all of the walking and intensity. Sore from old boots and activity. Wet from a light rain and sweat under a wool jacket and wool pants. I ate a Hershey bar for energy and then ate a cold can of SpaghettiOs. I kept walking.

Then I heard a motorbike behind me. It was a German. I waved my arms, then stuck out my thumb. He said something then motioned me in the sidecar. That is the story of how I got home after the war. 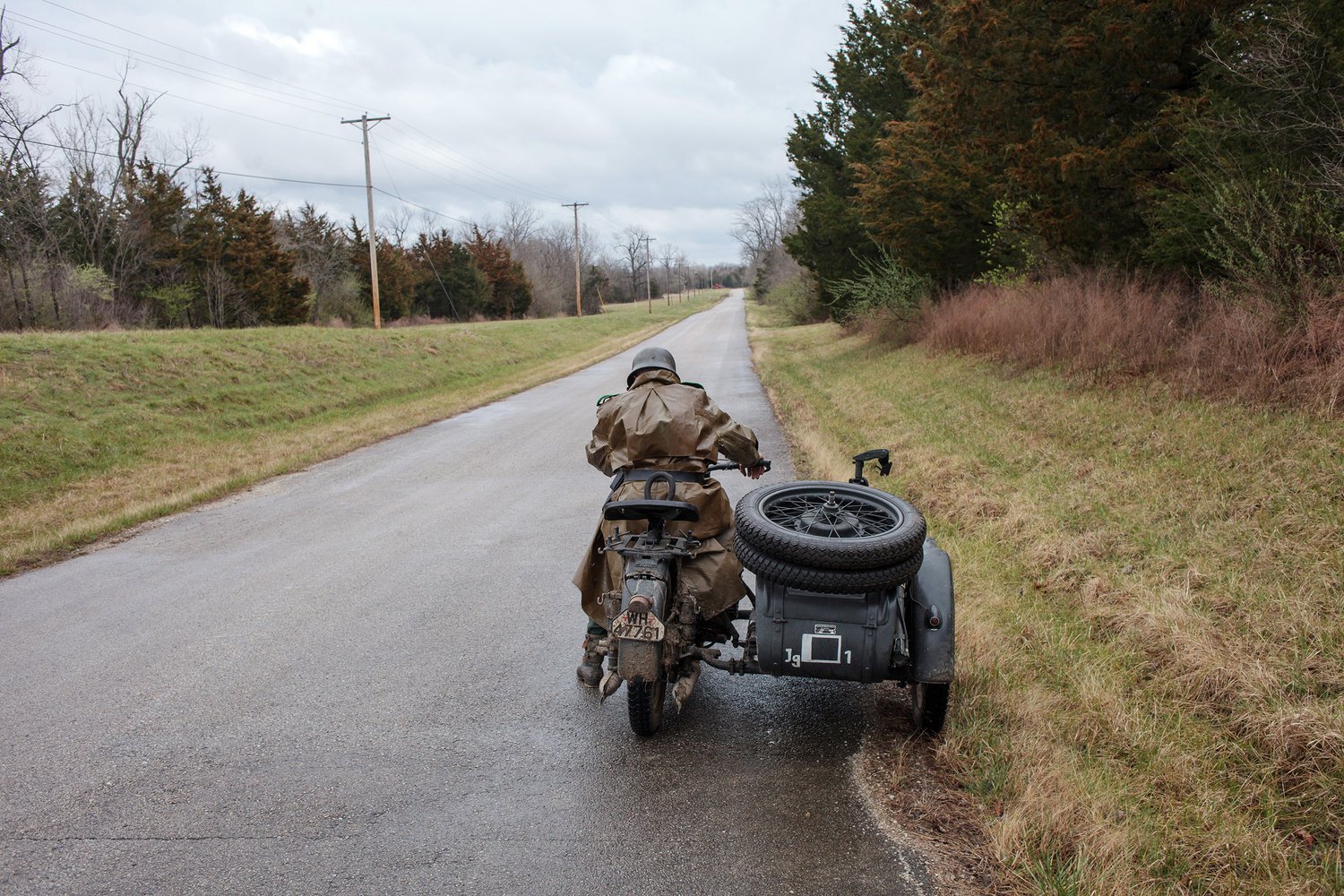 Well, I wasn’t home yet. I said my goodbyes after dinner and loaded up my old Honda Accord. It was kind of an odd moment. I was loading this damp US military wool jacket uniform and my Canon camera gear, made in Japan, into a Japanese made car. It was a little jarring for a moment, but then I put on some music and drove home.

About the author: Dan Gill is a photojournalist and commercial photographer based in Columbia, MO. He’s shot pictures and video for The New York Times, covered mid-Missouri for the Associated Press, taught photojournalism at Saint Louis University and gave a TEDx talk last week coming out on video soon). His work can be found at dangillphotos.com and follow him on Instagram @dgstl.

Why Printing Your Photos Will Make You a Better Photographer