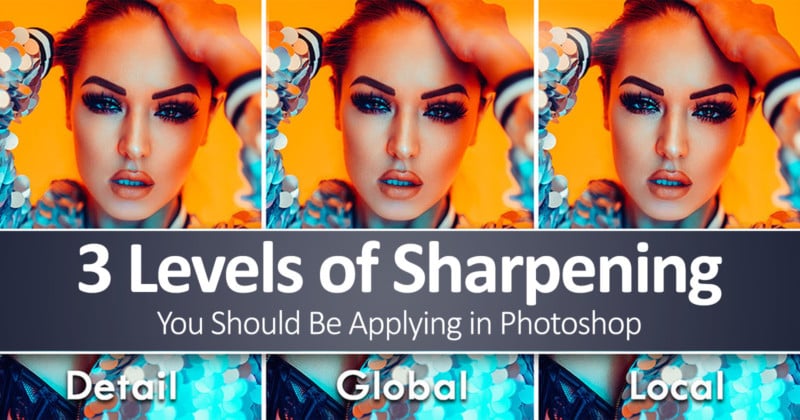 My name is Jake Hicks, and I’m an editorial and fashion photographer based in the UK. In this article, I’ll share a look at some of the sharpening techniques I use in Photoshop to give my images a little visual-pop before I publish them.

What is Image Sharpening?

Sharpening is one of those odd processes that we all do with our images even if we’re not aware of it. In fact, even the default import settings on a lot of raw processing software sharpens the images for us before we even look at them. Most of us don’t actually change that default setting because, let’s be honest, it looks better with a little sharpening to begin with. To see what I mean, the next time you import a raw into Lightroom or your preferred raw converter feel free to reduce the default sharpening settings to zero.

But even though our raw converters add a little bit of sharpening, I personally don’t add any additional sharpening until I’ve finished nearly all of my editing in Photoshop. Sharpening should be one of the very last things you do your image for a couple of reasons.

Secondly; sharpening in post-pro is a synthesised process. What I mean by that is that software plays tricks on the viewers eyes to ‘simulate’ an image being sharper and crisper than it actually is. We obviously can’t re-focus the image after the fact so we apply ‘sharpening’ to simulate it. During this process of our software synthesising sharpening it actually just increases the contrast of adjacent pixels thereby giving the image an overall sharper appearance. But that increase in contrast can also increase saturation in edge detail, which can be a problem if you haven’t finished editing your file yet.

So which sharpening techniques do I use? Now that we’ve established that we aren’t really re-focusing our image in post, we can look at sharpening as more of a series of clever tricks to simply visually improve our images. With this in mind I actually do my sharpening in three distinct stages; detail, global and local.

This is a sharpening technique that I use to visually tighten up the image towards the end of an edit. The technique uses the visual illusion of sharpening but increases the edge contrast at a far broader and softer scale. This is also a technique that is used to quickly and easily apply a dodging and burning effect by increasing the brightness of highlight areas and the darkness of shadows.

Remember what I said about sharpening only being the increase of contrast in adjacent pixels? Well this global technique is what sharpening can look like when applied more broadly as this technique sharpens adjacent tonal groups.

This localized sharpening technique I use is specifically targeted at visually drawing the attention of my viewers eyes where I want it. It’s a heavy sharpening look but it is localized to only areas like the eyes of a subject or the jewelry in an image where that extra pop of contrast can make those items really stand out.

The following steps take you through my Photoshop process exactly as I would when I’m retouching a shot. The keys and shortcuts are from a Mac so if you’re a PC user some things may be a little different but very minor.

First off we will need to make a flattened duplicate of the layered Photoshop document so far. As I mentioned at the start of the article, you will have already done the skin retouching, dodging and burning etc so now we need to create a flattened version of our file so far to work from. The following step creates a single flattened layer of everything below.

Select your top layer and hold the keys: 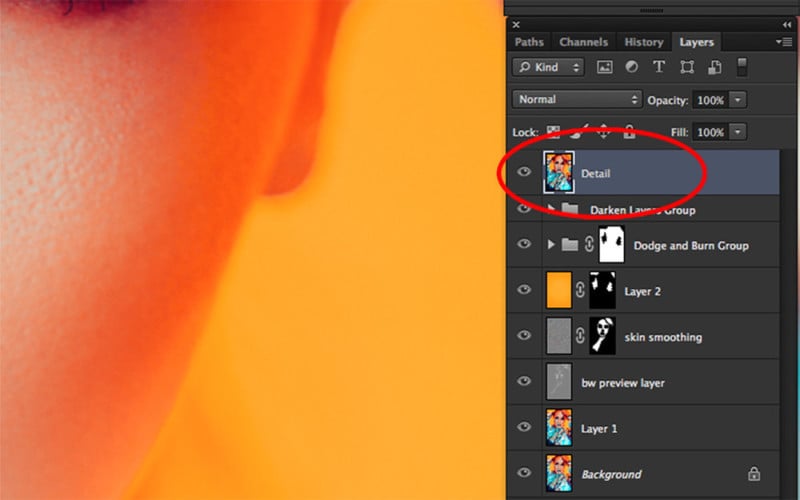 Now that you have your new layer we want to strip any colour information that may be present in that layer.

With our Detail layer selected, hold the keys

or go to: Image -> Adjustments -> Desaturate Your detail layer should now be black and white. 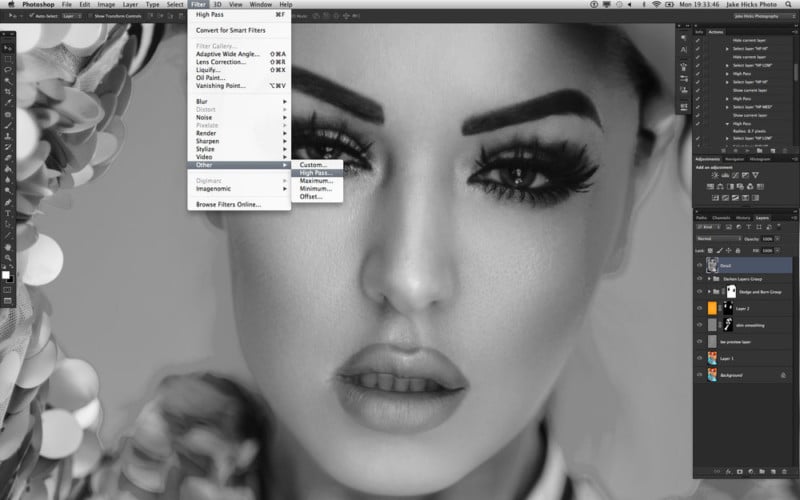 In the dialog box that opens, we want to select a sharpening amount that is specific to the edge detail of the chosen image. Choosing a lower amount at this stage is a good place to start and I went for 4 pixels here. 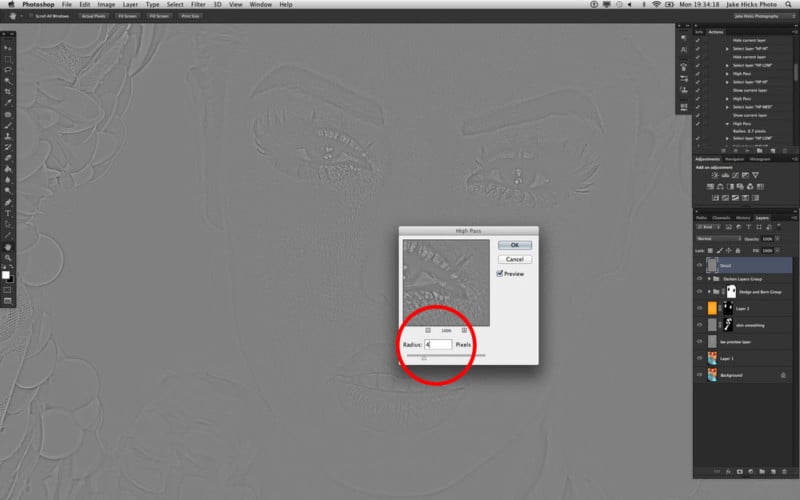 At the moment our image is looking pretty horrendous so we need to select a blending mode that will best display the sharpening amount that we’ve applied.

In the layers ‘Blending mode’ drop down choose something like ‘Vivid Light‘ or ‘Hard Light‘. The next step is optional and down to personal preference but you may also want to reduce the amount of layer opacity of your Detail layer. Try varying amounts of opacity and see what works for your specific image.

Next up we want to apply our Global sharpening. Remember this a technique that helps tie an image together and can be a great way to add some contrast via adding darkness to the shadows and brightness to the highlights. This is a very powerful technique but caution is advised because if overdone, the image can start to look very fake and artificial very quickly so subtly is key.

Again we want to strip away any colour information so with our Global layer selected, hold the keys

or go to: Image -> Adjustments -> Desaturate. 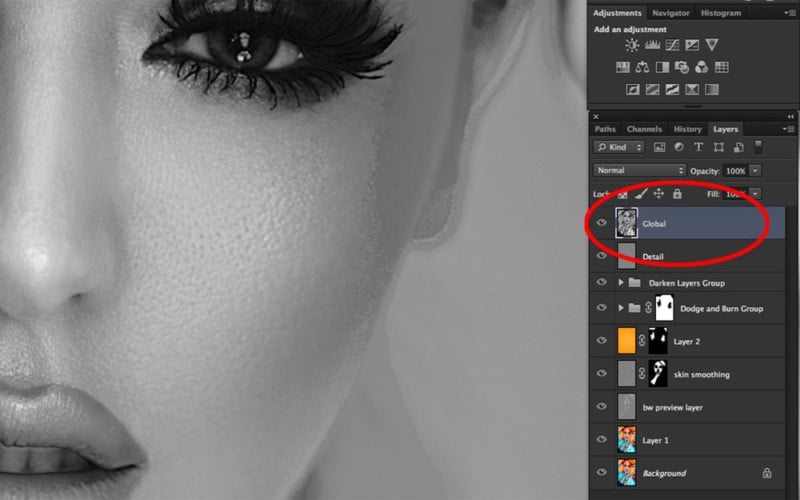 Your Global layer should now be black and white.

In the High Pass dialogue box we now want to choose a far broader amount of sharpening. In fact we want to select such a large amount that it now no longer looks like a sharpen but more like a glow. Again this amount is based on your image but I chose 40 for this particular shot. 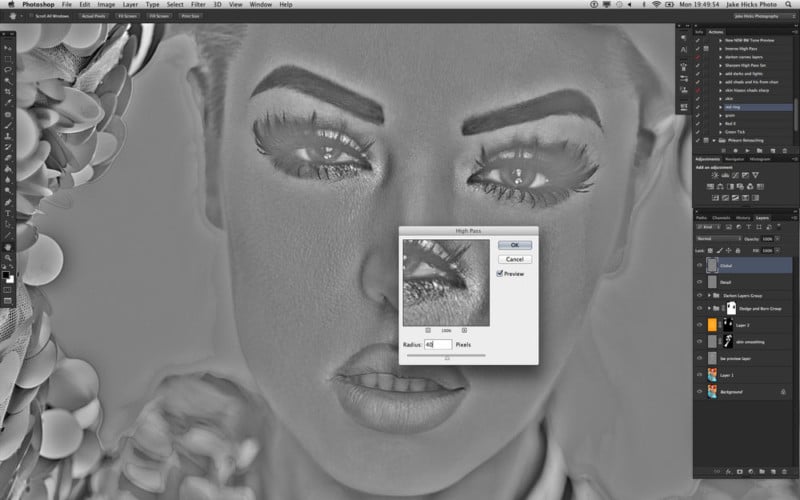 Next we will need to blend this layer just like the previous one but we will choose a more subtle blending option this time.

In the layers ‘Blending Mode‘ drop down choose something like ‘Soft Light‘.

At the moment the effect is probably still looking a little strong so you may want to consider reducing the amount of layer opacity to soften the look. For our last stage of sharpening we will be focusing on sharpening just certain areas of the image and masking out everything else. For a lot of images this can just be the eyes but this localized sharpening technique can also be used on jewelry and other styling items to really make them stand out if need be too.

Once more we want to strip away any colour information so with our Local layer selected, hold the keys

or go to: Image -> Adjustments -> Desaturate

Your Local layer should now be black and white.

This time around we are just looking at specific areas to sharpen so in the High Pass dialogue box we want to be gauging the amount we sharpen by looking solely at those features. For this image I will be looking at giving the eyes a little extra sharpening so I’ve chosen 8 as a good number to show that. Next we will need to blend this layer just like the previous ones but we will choose quite a strong look as we will be masking out everything apart from the eyes in our next steps.

In the layers ‘Blending mode’ drop down choose something like ‘Overlay‘.

We’re going to be masking this layer so we can leave the layer opacity at a 100% for now.

We want to completely hide this layer and only show certain areas so first we will mask it by either; 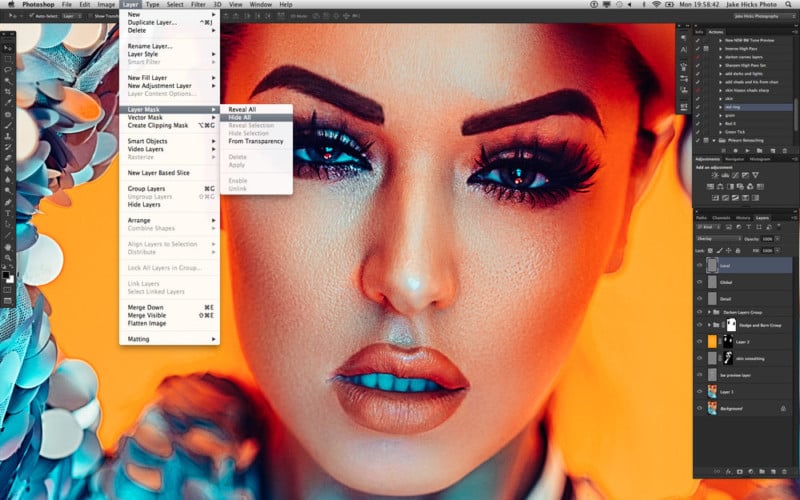 Your Local layer should no longer be visible and in the thumbnail in the layers palette there should be a black square next to it.

Next we want to reveal the areas we want so hit B for the brush tool and choose a large-sized soft bush. Next make sure the layer mask is selected by clicking onto it and lastly, paint with white paint over the eye area with 10-20% flow until the right amount of sharpening in the eyes is revealed. 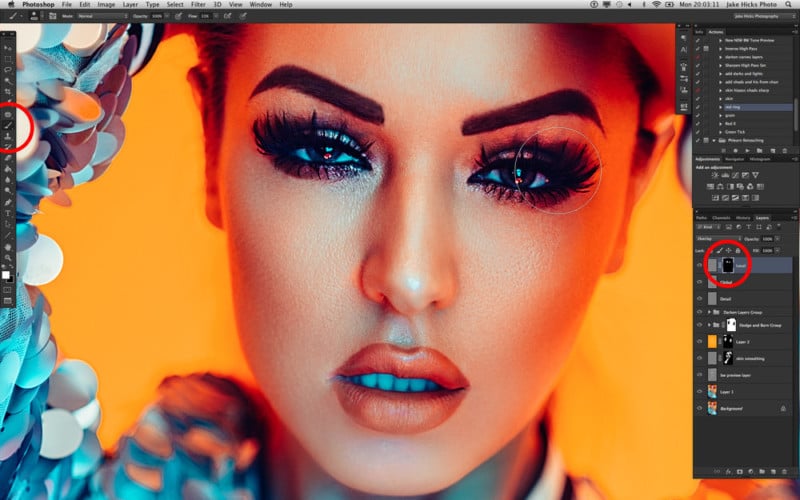 If after you’ve finished you feel you’ve gone too far then you can always reduce the layers opacity to reduce the effect further.

That is it, you’re done. You can either choose to save the file as it is or continue on with any other final colour toning adjustments.

P.S. Sharpening my image like this is just one small step in a long line of adjustments I make during my post-production process. If you’d like to know more about my post-pro workflow then I discuss my entire post production process from importing in Lightroom to exporting in Photoshop. Both for fast paced studio work and for my intense editorial retouching, I cover absolutely everything in my new face-to-face Post Pro Workshop.

See you there :D