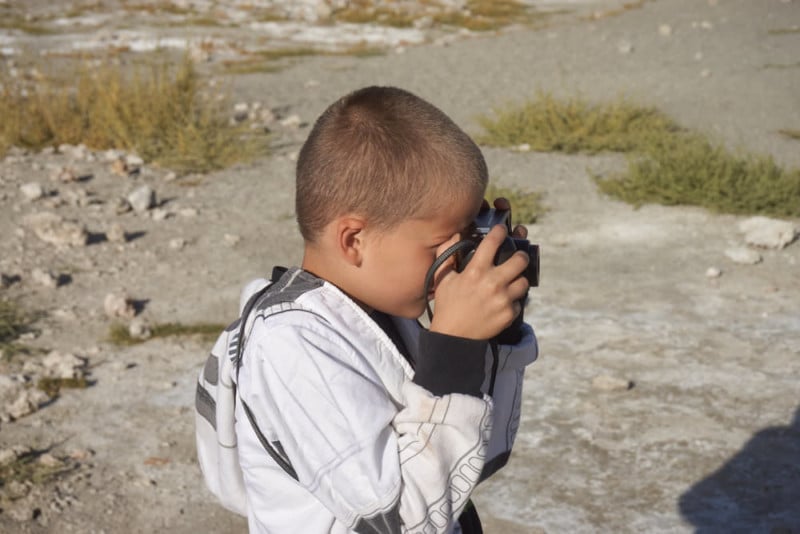 A couple of years ago, my twin boys (now 9) began to ask me for cameras. I was 6 when I got my first camera — it was the first thing I used my allowance on.

It was an old 110 Kodak camera. I was hooked from that moment and although there were moments where photography was not in the forefront, it was never too far behind (whether I realized it or not). So, since my boys were 7, I thought it was a great time for them to get started and was really excited (and a little nervous) about getting the opportunity to teach them.

Their experience thus far had been taking pictures with their iPad Minis. I personally detest taking pictures with iPhones and iPads. It just doesn’t feel natural and is very awkward for me. However, that’s the world we live in. Their first non-iPad cameras were inexpensive Canon point and shoots. My thought process was that in full auto I would have the opportunity to teach them about composition and how to identify light without getting caught up in all the controls, modes, and details (at least not yet).

Ayden and Steven Jr. were both very excited to get their cameras. I took them to the beach for their first run at it and they shot and shot and shot. When we got home and looked at the images they had probably 1,000 to 1,500 images each… of nothing! Sand, blurry rocks, unidentifiable objects, and blown out water (as close as they could get with it). They were a little disappointed, to say the least.

The second time out, I reminded them to slow down and take the time to frame and “see” the shot before taking it. Again, 1,000 shots of nothing.

Now some will read this as me punishing them but that is not the case at all. I just fell back to what worked for me: film. When I was 6 years old and had my brand new 110 camera, I blew through the first roll. Once I understood how much it cost to develop, process, and print, I went much slower and took the time to find interesting subjects instead of shooting anything and everything I saw.

So, we took the digital cameras and replaced them with film cameras that we got off of eBay for about $20 each (one is a Canon Sure Shot 76 Zoom and the other a Vivitar 2001 Z). As expected, the first time out they blew through the entire roll within a matter of minutes. When they were done they asked for more film. When I told them that 36 was all they got, they were bummed (especially since I continued to shoot the rest of the trip).

However, the next trip out with the same constraints (36 shots), the roll lasted the entire two-day trip. One of the boys actually left two frames unused. What made this special, other than just getting through to them, was that we developed and scanned the film together at home (We printed the image at Richard Photo Labs here in Valencia, CA.).

That tangible process helped them understand what it means to “create” an image. Steven Jr. entered a shot he took on the trip (above, from the Cerro Gordo Mountains of the Sierra’s) into his school art contest and was able to place with it. His shot was the only film shot in the contest (all the others were from phones or iPads). He was quite proud of it.

Over the next several months they got better and better. My next step was to start teaching them how to control depth of field. I needed a camera that could give them instant feedback as well as aperture priority mode. The old film cameras were great but lacked in the instant feedback area. So, it was time to move back to digital.

I took them to several stores so they could actually hold the different cameras so they could get something they would be comfortable with. This is surprisingly getting harder and harder to do. Many of the box stores have either broken demo units or the shelf is just empty. Best Buy and Walmart are both absolutely horrid (in my area) for doing this.

I told them whatever they got had to have A, P, and M modes and be under $300. They decided on the Sony DSC-HX80. Right before Christmas, this model was marked down to $280. Currently it’s listed at Best Buy online for $339.99. Small, not as fully featured as the RX series, but has everything they need to continue learning photography and within budget. It has been a great little camera thus far and I can see it being used for quite some time before needing to get into an SLR.

I don’t know if photography will drive either of them the way it has driven me, but during this process, I learned a few things from them too. First, iPad/iPhone first behavior drives the expectations with regard to how “all” electronics should work. They were (at first) frustrated that they could not swipe or tap menus on a “real” camera. I personally still prefer physical buttons.

Second, they don’t hesitate. I shoot primarily fashion, beauty, and portraits but love just about every genre of photography. When we travel I will get up early (or stay out late) and spend a half hour or more trying to get the scene just right. Not them. They see it and shoot. Without the constraints of information and camera geekery they have the freedom to compose and go.

Third, they see what they see. Much like five photographers shooting the same subject and each comes back with a different interpretation, the boys just “see” things different. Call it youth or inexperience but how they perceive the world and decide to capture it is refreshing and sometimes putting down the camera and just watching them take in and capture the world around them is quite special.

I am not suggesting that everyone needs a film camera to learn photography (or to teach their kids). For me it was beneficial. Everything these days is instant. It’s what they are used to. Getting them to slow down, find better subjects, and work through what the resulting image would be was challenging. Film helped. Getting the opportunity to process and scan it was not only a learning experience but fun for them as well. It was a great starting point and to this day they still ask to shoot the film cameras from time to time.

I am not one to force my passions (sports, hobbies, etc) onto my children. I want each of them to be their own person. I want them to experience the world through their eyes and not mine. They came to me about learning photography. However, as I pack up and prepare for our weekend trip, I can’t help but smile as I grab my gear bag and one of them says, “Daddy, don’t forget my camera”.

About the author: Steven Starr is a fashion, beauty, and editorial fashion photographer based in Los Angeles, CA. You can find more of his work on his website. This article also appeared here.