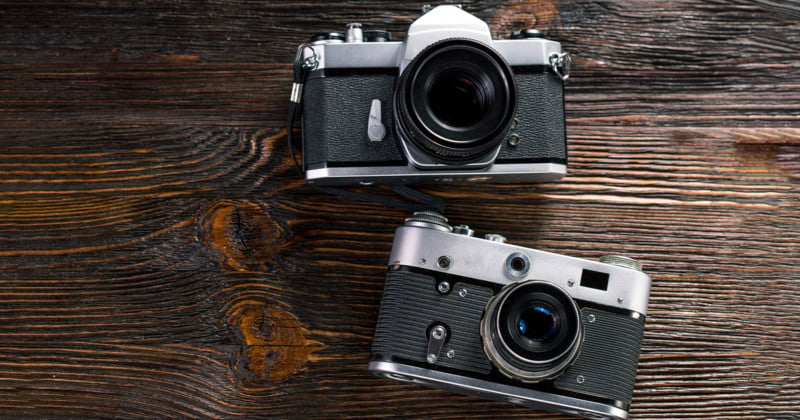 In July, I conducted a study that aimed to understand a bit more about the analog photography community’s demographics and attitudes towards the industry. As promised in my article Three Ways We Can Keep Analog Photography Alive, I have collated the data from the 355 responses received to share with the community.

Of course, some of the data confirmed some pre-existing hypotheses such as the demand for new analog camera products. Other data was more surprising like the gender demographic which showed that nine in ten respondents in this survey were male, with only 4.4% of the sample being female.

Upon reflecting on this data, it is important to keep in mind that this survey was shared through PetaPixel only and therefore does not represent the whole of the analog photography community.

Below, I have visualized the data and followed them with some of my thoughts. 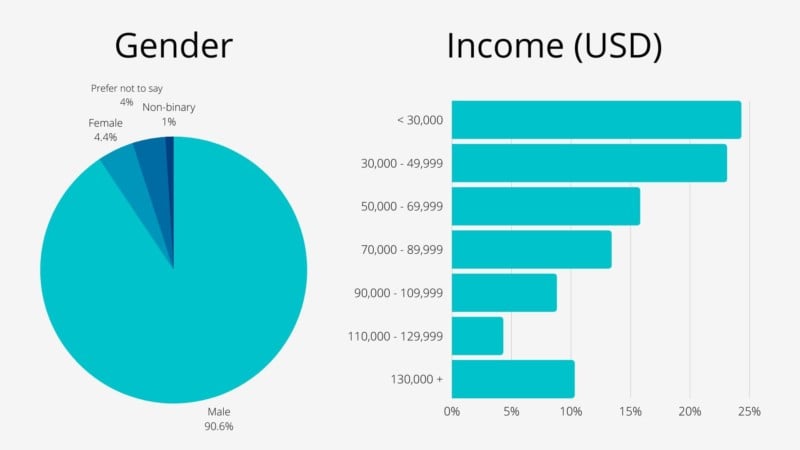 We all know that film is an expensive hobby, and it was a common theme in the comments section at the end of the survey that the price of film is one of the major problems stifling growth in the industry.

One respondent said, “The only reason I don’t shoot film more is because the processing is too expensive.”

Another respondent put it more bluntly: “Film is too expensive, and the companies don’t give a flying sh*t about growing it as a business.” 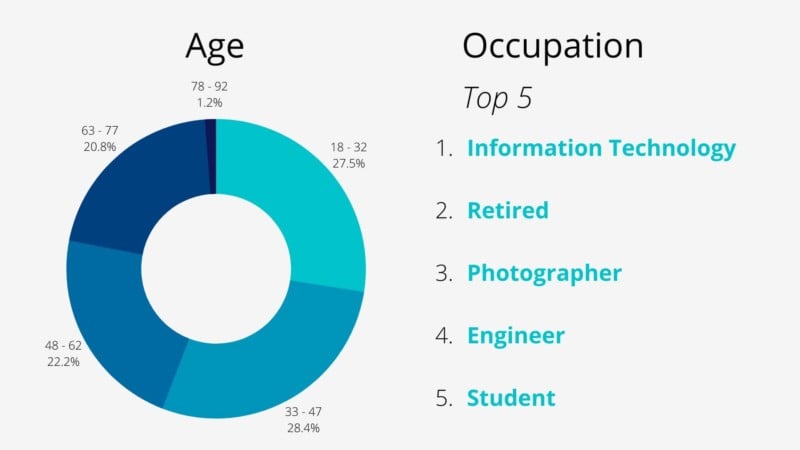 The age range was distributed quite evenly, suggesting an interest in analog photography across all generations. Importantly, over a quarter of the respondents were in the younger age bracket of 18 to 33.

In an interview on the Sunny 16 podcast, the Japan Camera Hunter Bellamy Hunt emphasized the importance of young people in the analog photography industry. When discussing the prospect of a new analog camera, he said, “We need new photographers, we need young photographers — people who have not used film before.” 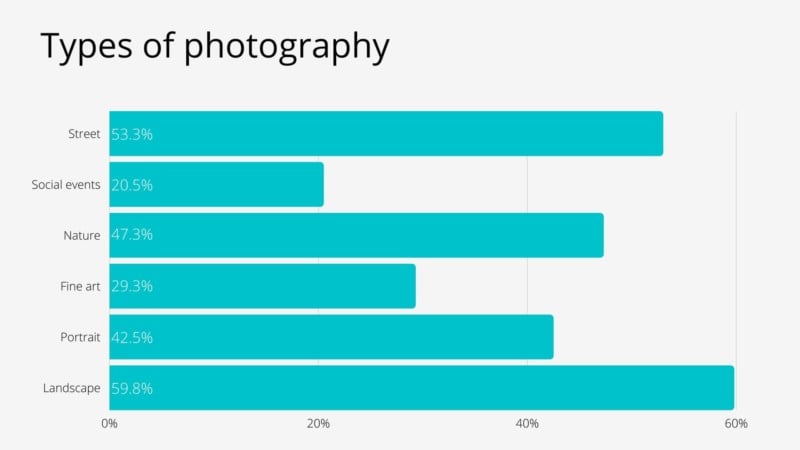 The community seems to love shooting outdoors! Street, landscape, and nature photography made up the top three types of photography that people enjoy most. It is also worth noting that architecture photography was the most frequent field added by respondents.

To my surprise, only one-fifth of respondents answered “taking photos at social events,” making it the least popular type of photography in the survey. This might suggest that the community is more interested in taking artistic photos rather than casual photos with family and friends. 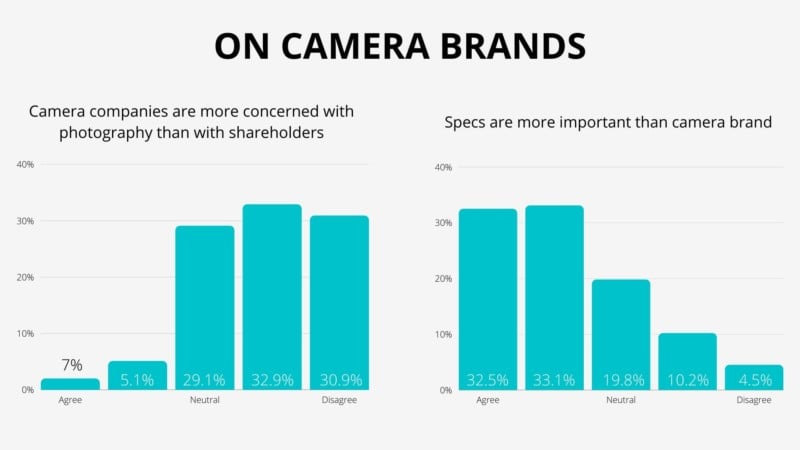 Camera models and brands have acquired cult followings in the analog community. One doesn’t have to spend long in a chat room entitled “Canon vs. Nikon” to see the connection that people feel toward their favorite brand and the resentment toward any other brand. 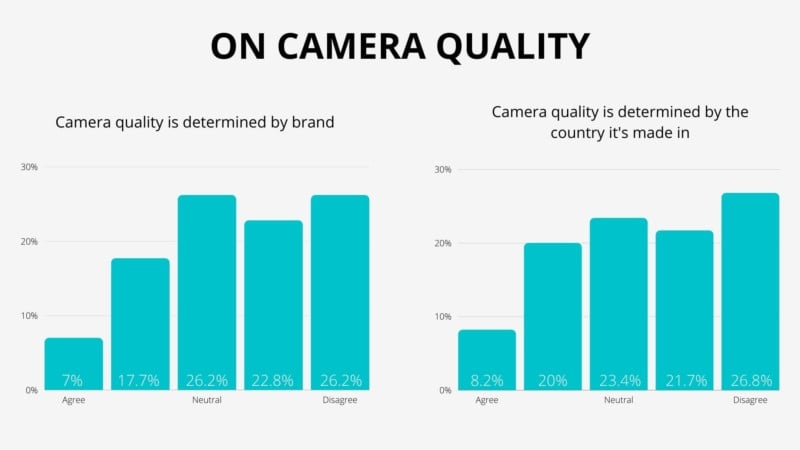 Yet, this survey suggests that there is actually a lack of brand snobbery. The brand and country of origin of a camera may contribute to the perception of the camera’s quality, but what people seem to really care about are camera specifications. 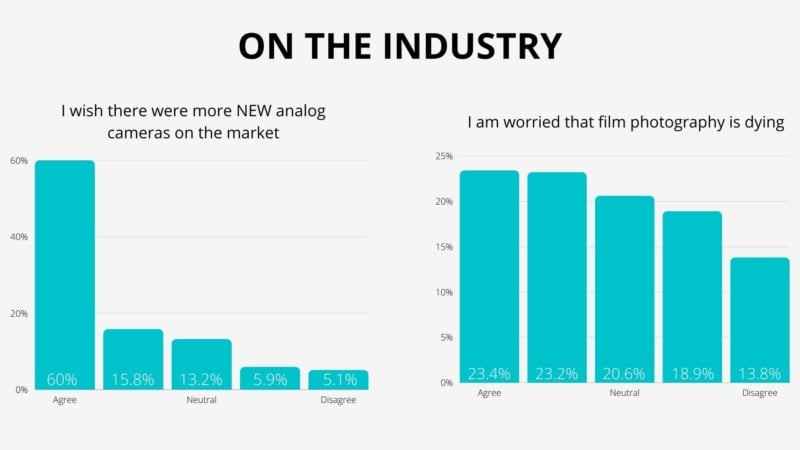 It is understandable that there is a general concern that film is dying. Except for a range of cheaply made cameras and exclusive cameras priced in the thousands, the choices are limited when it comes to buying a new analog camera.

This exciting conclusion suggests that there is indeed some potential for brave entrepreneurs to introduce new film photography products into the industry.

There is a general concern in the analog photography community that film is dying. However, it is my hope that this survey gives confidence to film lovers that the industry is far from dead.

Nearly 76% of respondents are hungry for new analog cameras. And I believe that there is enough evidence in this survey to suggest that there is demand for other products and services whether it’s a new way to process film or a new YouTube channel.

Finally, I would like to thank everyone who took the time to participate in the survey and for the fantastic feedback given in the comments section. The response to both my articles and the survey gives me a lot of hope that the analog photography industry will indeed be reinvigorated. I hope you share my optimism too.

About the author: Benjamin Santamaria is a marketing and communications officer for YMCA Australia. He studied communication at university, focusing his postgraduate research on how young people interact and identify with podcast hosts. Ben has a keen interest in analog photography and aspires to contribute to the reinvigoration of the analog photography market.