The recent collapsing of the Azure Window in Malta finally motivated me to take my keyboard and tell you the story behind the picture above.

T’was the summer of 2015. We were on a journey on the North Shore, a beautiful region of Québec at the mouth of the St Lawrence River. A pretty classic road trip. Departure from Montréal, a stop at Québec City, two nights at Grandes Bergeronnes next to Tadoussac. Here we go for a nice weekend of oxygenation. A summary can be seen in this video:

But among the hundred of pictures taken during this trip, it’s without any doubts this lonely seaplane on a lake at sunset that is the most fascinating.

This picture had been shot on the 2nd night of our weekend. While we were en route for Tadoussac for dinner, when our attention was caught by the side of the road with this seaplane and this lake. This was the kind of moment where all the passengers of the car marvel at the beauty of a fleeting moment of a sunset, and when the detour to go to the shore is not even to be discussed. Less than two days later… “Another Tragedy for Air Saguenay” 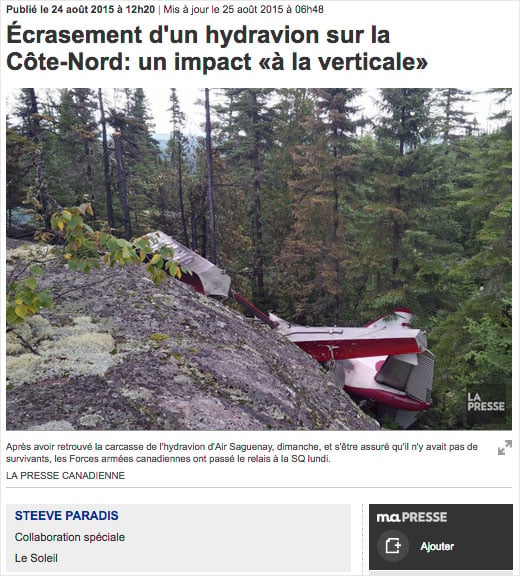 While we were heading back to Montréal, the radio announced the crash of a seaplane of Air Saguenay. After the obvious horror and empathy for the victims, a realization came to me — a realization that my photograph is probably among the last, maybe the last, existing of this aircraft.

The last visual trace of this seaplane in all its glory, innocently “immortalized” by my camera…

It’s also my guilty pleasure: this photography attracts, in an inexplicable manner, gazes and attention. As if an invisible force was attracting them, viewers stop and contemplate. And I like to come and have a contextualizing conversation…

Me: “You know there’s a whole story behind this picture…”

Me: “… This plane crashed the day after this picture. It’s probably among the last pictures of this particular plane.”

Viewer: *Mixed expression of fascination and half-disgust towards this new morbid information*

And this is where you really realize the responsibility of a photographer; our pictures might be the last trace of someone, somewhere, or something. Or maybe they will be the last trace of us in this world. That’s why they must exist (and the perfectionist will say “and be perfect too”).

This is where I also realized the broad scope of the name “visual storyteller” to describe a photographer. The story we’re telling is not always in the picture itself or in the moment it captured. No. It’s sometimes in a moment before or the after. In a temporality that hasn’t been frozen in the picture.

But taking a picture, and knowing it’s the last of the object you’re portraying, is a unique experience. Morbid, but profoundly aesthetic. Fascinating, but heavy with unsolved questions. It’s a peculiar feeling for a peculiar piece of art.

Almost two years after, I still don’t know how I feel about this picture and the responsibility it bears. But I feel that it deeply moves me, and will continue to do so until my last shutter click.

About the author: Jp Valery is a photographer and a product manager at Gameloft who’s based in Montréal, Quebec. You can find more of his work and connect with him on his website, portfolio, Twitter, Instagram, 500px, and Facebook. You can buy a print of Valery’s photo here. This article was also published here.

Is Street Photography Killing Itself?