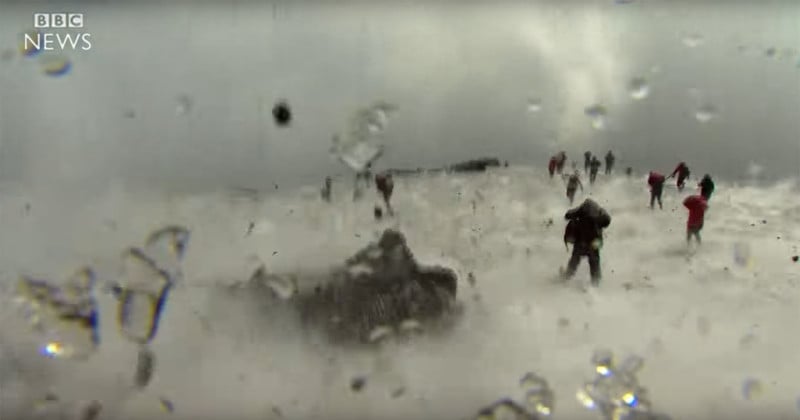 A BBC camera crew was on Mount Etna in Sicily on Thursday when the volcano suddenly erupted while cameras were rolling. The resulting footage shows the terrifying moments in which journalists and tourists fled from the explosion that rained down super hot rocks.

Here’s the video shot by BBC camerawoman and photographer Rachel Price of the UK:

"Very relieved to be safe" – the terrifying moment @BBCMorelle and crew were caught up in Mount Etna eruption https://t.co/11inHwxYPO pic.twitter.com/Zz0JKmWU1v

Journalist Rebecca Morelle reported on the explosion live in a series of Tweets:

Caught up in incident at Mount Etna – bbc crew & tourists caught up in huge explosion – caused injuries and evacuation from scene. (1)

Many injured – some head injuries, burns, cuts and bruises. Volcanologist said most dangerous incident experience in his 30 year career (3)

Incident could have been worse – explosions like this have killed – but seems minor injuries for now. (4)

Bbc team all ok – some cuts/ bruises and burns. Very shaken though – it was extremely scary. (5)

Running down a mountain pelted by rocks, dodging burning boulders and boiling steam – not an experience I ever ever want to repeat (8)

Camerawoman Rachel Price had a falling rock burn a hole through her coat:

Back at hotel now after Etna explosion. Here's @NewsCamerawoman with the massive hole a lump of rock burnt through her coat. pic.twitter.com/GVSyj3Sa9A

Thankfully, the BBC News crew and the tourists around them all escaped with their lives. Other photographers caught in volcanic eruptions in the past weren’t so fortunate: during the 1980 Mt. St. Helens eruption, photographer Robert Landsberg realized he couldn’t outrun the ash cloud, so he kept on shooting and then used his body to protect his camera and film.

Review: The Fujifilm GFX 50S is the Lamborghini of Medium Format