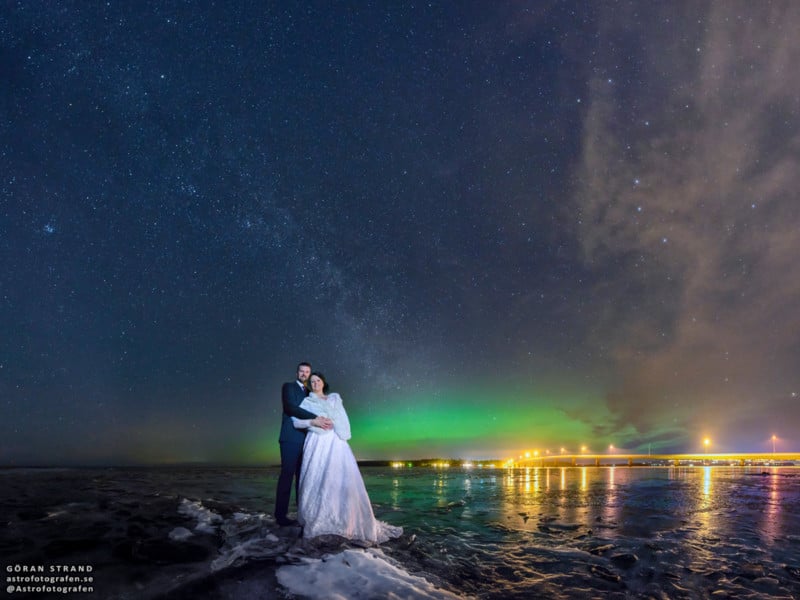 About a year ago, I was asked if I would like to do a wedding photography at night. The bride Erika had seen a photo of a moon halo I took earlier that year. In that photo, I had two friends that I ran into that night. They were out chasing the northern lights and I asked if I could take a photo of them together with the moon halo.

After I published this photo, Erika saw it and it gave her the idea that perhaps it would be possible to do a wedding photo under the stars. I was glad when Erika called me up and asked if this was possible. “Of course” I said.

Since there were just a few weeks left of the dark winter season 2015/2016 we decided to postpone the photo shoot until the next winter — the wedding wasn’t due until February in 2017. During the autumn, we discussed what foreground and background we should work with and we decided on doing a photo with the Milky Way and the northern lights as a background.

Since we needed both the Milky Way and the northern lights in the photo I wanted to wait until mid-winter when the Milky Way is positioned more in the north, as during autumn it rises in the West.

By the end of 2016 I started to scout for locations. I knew that in December Lake Storsjön would be frozen and I thought it would be nice to work with ice in the foreground. I came to think of a location from another fun shoot I did back in 2015, the Aurora Painter.

That location would be perfect for this wedding shoot so I went there as soon as the lake was frozen to see how it would look like with the ice and the bridge. I do like all the different colors you get in this scene.

Then in late January we got a night with clear weather and a good northern light forecast. I drove out to the location and the conditions looked perfect. I called Erika and Peter and told them to meet up with me with warm clothes. It was quite cold and I know how cold it is to just stand still, you can never have too much clothes on you while standing still during a cold winter night.

While waiting for the bride and groom I found a nice spot with lots of ice that had broken around a big stone. This would make a perfect foreground. Also, I noticed that the northern light activity started to pick up so everything looked really good. I did some longer test shots to see if the Milky Way would be visible behind the northern lights.

After we were done with the tests it was time to slip into something more beautiful.

When they were all dressed up I knew that time was of an essence since it was so cold. I was really impressed by Erika and Peter and how well they handled the cold and still being patient with me. First we did the shot of both of them together in front of the Milky Way and the northern lights. The final image is a panorama made up of 12 photos, this was needed to get as much of the Milky Way and the northern lights as possible.

Each photo has an exposure of 10 seconds at ISO 6400 so while exposing, Erika and Peter needed to stand still, smiling.

Then we did a couple of shots of just the bride, this was a little bit easier since I didn’t need to make a panorama and could work with single exposures. This photo was taken with an exposure of 10 seconds at ISO 1600.

In the photo of the bride I placed one of the flashes behind Erika to give me this long dark shadow towards the camera. I think it worked out quite well and I really like how her dress is reflected in the ice.

This was definitively one of the most fun wedding sessions I’ve done and I’m looking forward to doing more of them.

About the author: Swedish photographer Göran Strand has been working full-time as a professional astrophotographer since 2012. His work has been used by Coldplay, NASA, Spitz Incorporated, Discovery Channel, MSNBC and several national and international magazines and online news agencies. In November 2016, the Swedish Postal Service, PostNord AB, released five of Göran’s northern light photos as international stamps. In February 2017 Göran was selected at astrophotographer of the year in Sweden. You can find more of his work on his website, Instagram, Twitter, and Facebook.