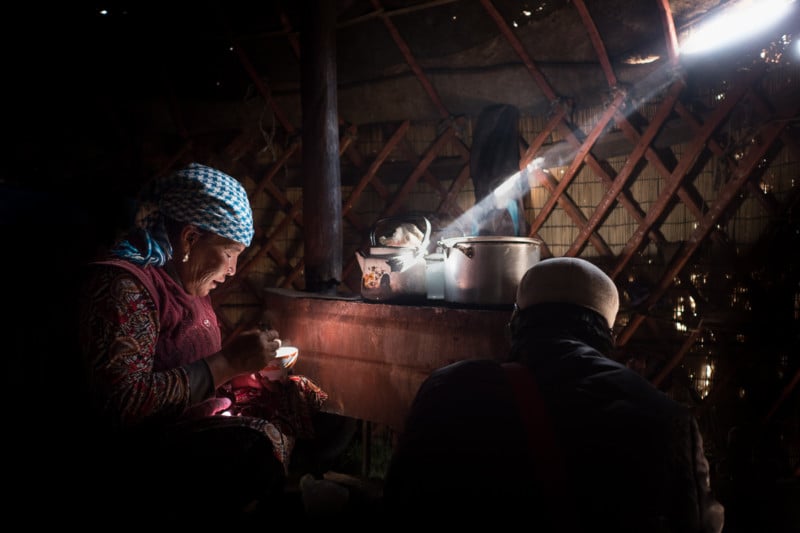 For as long as I’ve been photographing, I’ve always had a soft spot for gear and the technical side of photography. In the beginning, I was obsessed with getting the best camera I could afford, which, ironically, was a refurbished entry-level Nikon DSLR—not exactly the pinnacle of camera technology at the time.

For the years following, I shot with Nikon DSLRs and these cameras are the ones with which I first started my photography career. At the time my needs for a camera were simple: good image quality. Most of my work was still travel photography, but mainly posed portraiture, landscape work, and the occasional ‘action’ shot. I didn’t care about weight or usability, in my mind DSLRs were the only way to do it.

After a couple of years and some extra lenses in my kit bag, the weight started to become an annoyance. I was either leaving gear in my hotel or being wiped out after a day of lugging a weighty rucksack. This is when my first venture into looking at smaller gear started; I looked at Fuji, Olympus and eventually settled with Panasonic and the GX7.

At the time many photographers were looking into smaller cameras, Instagram was taking off, iPhones were being hailed as the DSLR killer, and the mirrorless boom started. Seeing amazing, candid, fly on the wall imagery being captured with cameras like the Ricoh GR, iPhones, Olympus OMDs etc. began to make me realize what I was missing out on.

On my first trip with the GX7, I had a bit of an epiphany: using a small camera and the silent shutter mode meant I was able to photograph in a candid was that was just not possible in the same way with my DSLR.

Small usability features like the flip out screen, constant exposure preview in the EVF, and tiny, high-quality primes like the Leica 15mm f/1.7 made the switch over decision rather simple. My thought process towards cameras changed; no longer was I interested in choosing cameras purely from an image quality perspective.

Note: Despite being an ambassador for Panasonic Europe and using their gear solely for the last three years, I think it’s important to note that none of what I want to discuss is brand specific. Yes, features between each brand vary to some degree, but it’s finding the feature mix that’s right for you. I have close friends producing amazing work on Fuji and Olympus cameras too, the brand is secondary.

Changing the Way I Shoot

The most surprising revelation in my journey into mirrorless and Micro Four Thirds was actually seeing how my needs and shooting style evolved through using the cameras.

Having a small, flexible and portable camera meant that I could create images on the fly. Even whilst traveling between locations, I could sling a camera over my shoulder and capture the interesting moments that appeared before me. Situations where I wouldn’t normally shoot suddenly became accessible and, most importantly, visually interesting.

With the discreetness of the camera, I also found it no longer became a barrier between me and my subject; that was regardless of whether I was shooting a posed portrait or a candid street image.

For street photography, I started to find confidence in putting the camera in front of strangers. When shooting more posed imagery, the camera was less intimidating, the silent mode allowed me to shoot more freely without situations becoming awkward, and touch screen meant I could shoot my subject as they were interacting with others in the scene, creating candid images in situations I wouldn’t have done before.

Just walking the streets, the small chance encounters that I love so much about travel became opportunities to create interesting images.

Why the Camera Matters

Everyone has seen those Canon v Nikon, Sony v Fuji posts that generally get us nowhere other than getting the hardcore gear heads a little sweaty under the collar. Despite my love of gear and technology, I honestly couldn’t care what camera you use, as long as you’re creating amazing imagery with it.

For me, three features in particular allow me to shoot to the best of my ability.

This is huge for me, no matter how small your camera, if it the mirror and shutter is clapping down whilst you’re shooting in an intimate setting, you’re going to become a distraction.

Often, with the silent mode on, I can shoot in super intimate settings like churches or inside people’s houses with my subjects completely aware that I am photographing them in that specific moment. Even in times where I want some interaction with the subject, for a portrait, for example, the removal of the audible cue of the shutter means my subjects become less uneasy about me taking multiple images.

In addition to the audible cue of the shutter, removing the visual cue of both holding the camera to the eye and also clicking the shutter can help to create more candid imagery.

In most places, especially lesser developed areas where people associate taking an image with holding a camera to the eye, having the ability to shoot from the hip by tapping the screen is incredibly powerful. Also, having the ability to move the focal point by moving your finger along the screen makes focus and recomposing unnecessary, and shooting so much more intuitive and fast. In the end, my bin rate from missed focus is almost nil.

This is a pretty obvious requirement, but as a traveling photographer, the weight of my gear is key. As I’m often also creating video content, I usually carry multiple bodies and multiple lenses too. Having a couple of bodies and 5-6 lenses that, along with my laptop and other necessary bits, can fit within my hand luggage allowance means that getting through airports is a breeze. It also means that I’m carrying it with me all the time.

Having the fall back of knowing I have lenses covering 95% of all focal lengths in my shoulder bag means I’m much more likely to capture great images. How many times have you seen a situation unfold in front of you and wished you’d had your other lens with you?

Hopefully by now you can see why I think the camera is key. If it’s small, lightweight, and intuitive you’re not only more likely to create better images, but you’ll also start to work differently too. For me, the key driver of my work over the last few years has been improving my candid images, being able to capture unique moments that wouldn’t be possible to set up.

Adventure, experimentation and exploration in your photography come about when you have a camera that fun and enjoyable to use. For each of us this may mean different things; for me, it means MFT cameras.

I’m not saying that just getting a different camera will make you a better photographer, far from it, but if you have a camera that has features that compliment your working style, you’re improving the odds of creating special images.

I think it’s important to reiterate that it’s not about the brand or a particular camera. In fact, it’s about finding a camera with features to compliment how you shoot. For travel photography, I truly believe smaller cameras with the features I listed above can transform the way you shoot and truly help you to create better imagery and as photographers—that’s the most important thing, right?

About the author: Jacob James is a travel and cultural documentary photographer with a passion for immersing himself in new cultures and experiences. To see more of his work, visit his website or follow him on Facebook and Instagram. This post was also published here.

Nikon Speaks Out: Will Focus on Medium to High-End DSLRs and Lenses