A Siberian tiger farm in China’s Heilongjiang Province was using a drone to exercise their rather chubby ambush of tigers (yes, that’s the correct term) when one young tiger proved, yet again, that technology is no match for fierce mother nature.

The video was posted to YouTube by CCTV+, who claims the Harbin Siberian Tiger Park uses the drones to exercise the tigers, who have been lazing around and maintaining their weight during winter. But the exercise session turned into a metallic feeding frenzy when a 2 or 3-year-old tiger took the drone down in a rather heroic leap.

After the drone was taken down, the exercise session broke down faster than the drone, which didn’t stay in one piece for very long anyhow. Small pieces and big chunks were torn off with brutal efficiency right up until the drone started smoking and startled the ambush.

What was left of the drone was later recovered using “a well-protected vehicle.” 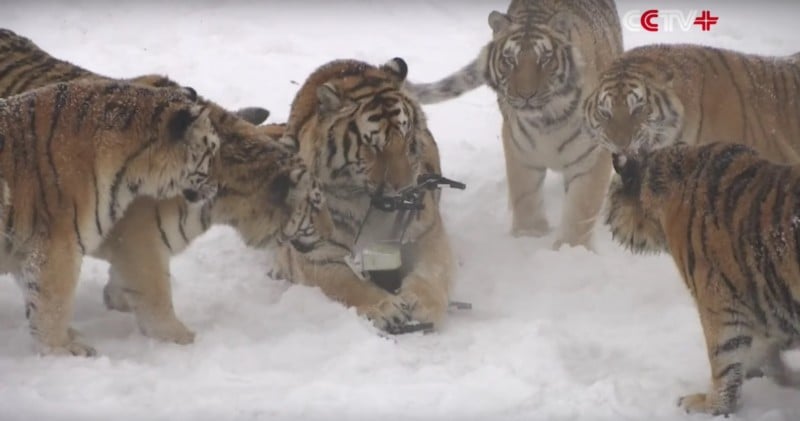 Unfortunately, that’s not where this story ends. A little bit of digging reveals that this encounter between tiger and drone isn’t all playful. The “park” the footage comes from allegedly keeps their cats in “deplorable conditions” and sells tiger bone wine, even though the horrific practice was banned in 1993.

The video is undeniably captivating—and fortunately the tigers seem well-fed—but if you enjoy the chase, consider donating to a reputable big cat sanctuary.

Instagram for Photographers: The Good, The Bad, and The Ugly